Vigyan Prasar has prepared a list of 75 stalwart scientists to commemorate the 75th anniversary of Indian independence. 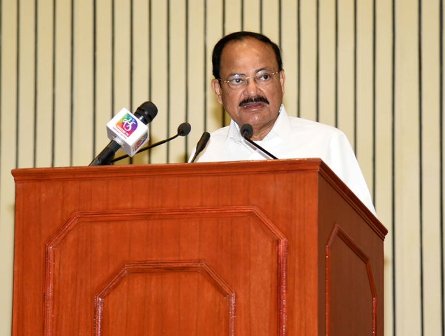 in regional languages to reach out scientific concepts and developments to the common man in their mother tongue and inculcate the much-needed scientific temper among them.

He recalled that the Constitution lists ‘developing scientific temper and the spirit of inquiry’ in people as a Fundamental Duty and said there was also a need for increased efforts to popularise science through books, TV shows and radio broadcasts.

He reflected on the impact of technology like Artificial Intelligence on people’s lives and pointed up that science discourse must now become more inclusive and democratic. He asked the scientific community to take the advancements in their fields to the people, suggesting they have a scientific social responsibility or SSR, akin to corporate social responsibility.

The Vice President was inaugurating a year-long celebration of birth centenaries of six inspirational scientists, organised by Vigyan Prasar, an autonomous organisation of the Department of Science & Technology.

The programme also marked the National Mathematics Day, which is celebrated each year on November 22, marking the birth anniversary of the legendary Indian mathematician, Srinivasa Ramanujan.

Recalling the contributions of Ramanujan, Shri Naidu emphasised the need to recognise the contributions of Indian scientists and mathematicians to nation-building. “We must recount their inspirational stories to our youngsters and encourage them to take up careers in science”, he added.

He noted that even though they were not provided adequate freedom, respect, and space to conduct their scientific studies under colonial rule, they showed indomitable spirit in their scientific endeavour.

The Vice President urged efforts to help India become a world leader in scientific research. To this end, he suggested increasing public and private investments in R&D, encouraging scholars to publish papers in reputed peer-reviewed journals, resolving bottlenecks in the patenting regime and nurturing promising ideas that find wide applications.

Stressing on the importance of the right talent in STEM, Mr. Naidu said that the issue of gender divide in the field must be addressed. He observed that even though the STEM field has more than 42 percent female graduates, only 16.6% of women researchers are directly engaged in R & D activities. He called for creating an enabling environment so that more girls can take up careers in mathematics and science.

Noting that many children develop a fear for mathematics and science in schools, Shri Naidu suggested arousing an interest in the subject through experiential learning methods. “Puzzles, demonstrations and other hands-on activities could be utilised to make children become friends with numbers”, he said.

Principal Scientific Adviser, Government of India, Prof. K. Vijay Raghavan, Secretary, Department of Science & Technology, Dr. Srivari Chanderasekhar, and Director, Vigyan Prasar, Dr. Nakul Parashar emphasised the need to expose youngsters and children to the life and work of all those scientists and technocrats who had contributed to the building of Indian science.

Vigyan Prasar has prepared a list of 75 stalwart scientists to commemorate the 75th anniversary of Indian independence.

The programme also featured a technical session where experts from different fields remembered the life and works of the six scientists whose birth centenaries are being celebrated this year. Prof. Ch Mohan Rao outlined how Prof. H.G. Khorana played a crucial role in deciphering the genetic code and how he rose from a humble beginning to one of the greatest scientists of the 20th century. Prof Rohuni Godbole spoke as to how besides being an excellent academic and scientist, Prof. Rajeshwari Chatterjee worked on social programmes with the Indian Association for Women’s Studies promoting the education of women in the field of science and technology. Prof M.M. Sharma remembered the contributions of Prof. G.S.Laddha in the establishment of several chemical industries in the country.

Dr. S. Ramasami recalled how Dr. Yelavarthy Nayudamma was committed to social inclusiveness and worked to synergise research laboratories for the betterment of the underprivileged. Prof. P. Balaram recalled the contribution of Prof. G.N. Ramachandran to the triple helical structure of collagen and noted that he chose to work in India despite many offers of research assignments in western countries. Prof. Sudha Seshayyan highlighted the contribution of Prof. B. Ramamurthy towards the setting up of the National Brain Centre at Manesar as an apex body for the coordination of brain research in the country.