Violent Conflict in the Countryside: Case of the Philippines

The Philippines is marred by human rights violations in the form of killings, disappearances, injuries, detention, criminalisation, displacement, damage to property, unfair contracts and labour practices, and intrusion into territories without free, prior, and informed consent (FPIC).

Reportedly, Philippines is considered Asia’s most dangerous country, second only to Brazil in the world for the number of deaths in 2018 of land and environment defenders or “green activists”.

There were 352 cases found from the period of January 2017 to June 2018 covering an estimated 30 million hectares of land. Said area comprises four per cent of the total territory of the Philippines. Majority of the cases, 208 of them, took place in the southern region of Mindanao, commonly called Southern Philippines.

In a study entitled ‘In Defense of Land Rights: A Monitoring of Report on Land Conflicts in Six Asian Countries’ published by the Asian NGO Coalition for Agrarian Reform and Rural Development (ANGOC) in early 2019, the nature, causes, and impacts of land and resource conflicts have been discussed. Human right issues in Bangladesh, Cambodia, India, Indonesia, Nepal, Pakistan, and the Philippines have also been highlighted.

Nearly half (48 per cent) of the land and resource conflicts in the Philippines were between communities and businesses.

It also notes that the duration of a conflict ranges from less than a year to 68 years, with an average of 14.

About 431 instances of human right violations (HRVs) were found in 233 cases studied.  Majority of these incidents (272) occurred in Mindanao. HRVs came in the form of killings, disappearances, injuries, detention, criminalisation, displacement, damage to property, unfair contracts and labour practices, and intrusion into territories without free, prior, and informed consent (FPIC).

There were 61 killings perpetrated mostly (44) by the Philippine military in alliance with landed elites and corporations.

Said killings were justified as “anti-insurgency campaigns” that had the net effect of emboldening landed elites to resist coverage of their landholdings in the agrarian reform program of the Philippine Government, or facilitated the entry or expansion of investment projects in ancestral domains. Many of these investments were owned by influential families, particularly cronies of the late dictator Ferdinand Marcos, and/or prominent legislators and local chief executives.

Other perpetrators of killings were guns for hire, private armed groups, rebel groups and paramilitary groups employed by businesses, and community members in cases of inter-community land ownership conflicts.

It is important to note that 55 or 90 per cent of those killed were affiliated with Civil Society Organisations (CSOs) and social movements.

On top of the killings, there were six individuals that disappeared; eight individuals injured; and, 17 individuals illegally detained. All these incidences of violence, except one case of injury, were also allegedly committed by the military.

One hundred four community leaders were booked with trumped up charges, mostly filed by the military.

Such arrangements involve businesses unfairly limiting the control and decision-making exercised by farmers over their land or altogether deprive the farmers of land rights, while some bury them in debt. Other forms of economic exploitation are labour issues in haciendas/plantations and the refusal by mining companies in ancestral domains to pay royalties to indigenous communities.

There were also 126 incidents of forcible entry into ancestral domains without FPIC. A majority (98) of these incidents occurred in Mindanao. These violations were committed by businesses or migrants claiming ownership and/or use of land for purposes not properly discussed with the existing Indigenous Political Structure in the area. Such consultation is mandated by law in Republic Act 8371 or the Indigenous People’s Right Act.

Impact on the Environment

Damage to the environment is a pronounced yet indirect effect of land and resource conflicts arising from investments. Particularly, in mining and logging, more than 47,000 livelihoods have been damaged by pollution. Such investments have major impact on public health as a result of the contamination of bodies of water, while others are felt by communities by way of damage to biodiversity.

The clearing of forests makes communities vulnerable to natural disasters and climate change, resulting in hundreds of deaths. Mining operations weaken the integrity of soil, leading to siltation and landslides. 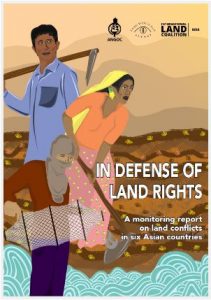 Overall, there is a dearth of responsive mechanisms to address land and resource conflicts. When parties pursue court intervention, litigation is time-consuming and resource-draining lasting from three to 17 years. These legal battles are especially costly for the rural poor.

Recourse for the rural poor is often fleeting. The government is often caught in fundamental conflicts of interests that come in two forms.

First, various agencies imbued with their respective mandates and programs compete for jurisdiction over the same parcels of land. In the absence of clear harmonisation of overlapping laws, land and resource conflicts persist unresolved and eventually turn violent. This renders the tenure of land and natural resource stakeholders, particularly rural poor communities, insecure, and perennially contested. Consequently, their lives and livelihoods are beset with danger.

The second form of conflict of interest can be seen in the policies of the government to expedite investments in the name of “ease of doing business” and “readiness for integration”. In many cases of land investments, the government is a facilitator or even a direct partner. Thus, the government often fails to perform its mandate to regulate business, particularly when the rights of people and communities are being trampled upon.

“Given the broader human rights situation in the Philippines: the War on Drugs, Martial Law in Mindanao, All-out War against terrorism and insurgency; impunity has characterised the rule of law in Philippine society.”

It is in these times that the barrel of the gun has been pointed at the very people in need of protection the most.

For the Philippine study, engagements have been pursued with the Commission on Human Rights of the Philippines as well as government agencies linked to the incidences. Various forums have been organised and the following recommendations have been formulated to enjoin a broad set of stakeholders to address land and resource conflicts.

“Finally, it is crucial that the awareness of government officials and personnel on land and human rights is raised, most especially the military.”

For Businesses: They are called to comply with government regulations to ensure the sustainability of their investments, lest their investments be made to stop. They are encouraged to engage in constructive discussion towards the realisation of the UNGP-BHR.

For CSOs and social movements: They must unite under a common goal and program of responding to the needs of rural poor communities. It must continue its role of organising and empowering the rural poor to enable them to effectively defend their rights. Existing reporting and protection mechanisms must be strengthened and widely disseminated so that they and the rural poor can utilise these in cases of violations of their rights. Amidst all the challenges, CSOs must sustain and strengthen non-violent struggle to hold rights’ violators accountable for their actions.

The writer works as a Project Officer with Asian NGO Coalition for Agrarian Reform and Rural Development (ANGOC), Philippines. He can be reached on twitter @ANGOCorg

Necessary to build a political mandate for Decentralised Renewable Energy