Even as the Women’s Reservation Bill, 2008 which was approved by the Rajya Sabha but failed to find support in the Lok Sabha, continues to languish, the moves by Naveen Patnaik and Mamata Banerjee need to be scrutinised against their commitment so as not to be a mere poll gimmick.

In the run up to 2019 General Elections, Odisha Chief Minister Naveen Patnaik has announced 33 per cent reservation for women candidates by giving seats for both Parliament and Assembly. Last year, as an Assembly resolution, 33 per cent was reserved for women in Parliament and state assemblies. Patnaik, however, made the announcement only for Lok Sabha elections and not for state polls which are slated to be held alongside Lok Sabha polls. Following Patnaik, his West Bengal counterpart Mamata Banaerjee went a step ahead and reserved seats for women in Parliament and Assembly at 41 per cent.

Even as the Women’s Reservation Bill, 2008 which was approved by the Rajya Sabha but failed to find support in the Lok Sabha, continues to languish, the moves by Patnaik and Banerjee need to be scrutinised against their commitment so as not to be a mere poll gimmick.

One of the traditional vote banks for ruling Biju Janata Dal (BJD) are the royal family members as it has seen many ‘Deos’ and ‘Sighdeos’ in politics. Those who were young 20 years back are getting old and would now like to pass on the baton to young family members. The strategy could be to rehabilitate family members of underperforming and non-performing MPs and MLAs in their popular bastions. Lawmakers elected for several times have already created a vote base for the constituency and the district. So, they could also think of fielding family members in nearby constituencies. This magic number of 33 per cent reservation gives an instant exaltation.

Crime against women and children

The rape incident of a minor of Kunduli community which forced her to commit suicide, stirred the anger of the state as it exposed the law and order situation of Odisha when it comes to women and children’s safety. There were hundreds of such cases reported and many still remain unreported in Odisha.

“Another recent incident is the Gumudumaha firing on innocent tribals (that includes a mother and baby) that shocked the civilised world. The apathetic situation of women and children has led most embassies and consulates in India to issue advisories on the law and order situation of the state.”

On one hand, torturing poor, deprived, tribal women on a large scale and on the other, extending benefits of reservations to powerful leaders/families is double speak. In the long run, this creates a space for extra constitutional power centres and is detrimental to the state. Few days back, Sumani Jhodia, septuagenarian female tribal leader of southern Odisha, once given special police officer power for the anti-liquor campaign, was expressing her disgust with how the government has sidelined her.

The ruling BJD is adhering to all possible measures to win seats in Parliament and Assembly elections happening simultaneously this time. The last General Election held in 2014 was an eye-opener and a surprise for those who minutely observe political developments in this eastern Indian state. Out of 21 Parliament seats, ruling BJD got a whopping 20 seats. Similarly, in Assembly, the BJD party got 119 seats out of a total 147 seats. But huge quantitative presence of lawmakers from this particular party has not resulted in any qualitative development in the state. Notably, the lawmakers were seen indulging in scams, corruption and crime. Not only that, behaviour and attitude of the lawmakers towards general public is getting increasingly feudalistic.

Performance of women lawmakers of Odisha in Parliament is miserably low and unsatisfactory. Rita Tarai, the current MP of Jajpur parliamentary constituency, who created uproar in the lower house. Unfortunately, she was not able to speak in Hindi or English and was not even confident in Odia, her mother tongue. Once a Zilla Parishad President, she graduated to take up, under the instruction of Patnaik, a MP’s role which turned out to be disastrous.

She was not oriented towards the party mechanism or on how to deliver output in Parliament.

With the untimely death of Kandhamal MP, Hemendra Chandra Singh, his wife Pratyusha Devi got elected to the Parliament through by-election. With the number increasing to just three women MPs, quality representation remains a matter of concern.

Criminal antecedents and poor quality of leaders are creating a huge burden for the party. If recent trends of crimes are to be observed, it would highlight how lawmakers in Odisha are engaged in crime and harassment in their own areas and against their own family.

There are allegations against Anubhav Patnaik, MLA of Khandapada for depriving his sister, Debasish Samantaray, MLA of depriving sister-in-law and Raghunath Mohanty, five-time MLA of Basta and ex-minister for a dowry torture case slapped by his daughter-in-law for which he was arrested.

“Time and again, other members of the Assembly are also directly and indirectly alleged to be involved in murders and harassment of women in the state. Seven-time MLA and former Minister Dr. Damodar Rout was recently expelled from ruling BJD party for his derogatory remark on Anganwadi Workers (health and nutrition outreach workers) and political workers.”

Dr. Damodar Rout, in the early part of 1990s was also accused of allegedly touching a woman Block Panchayat Chairman in an inappropriate manner at an official function at Kutra in Sundargarh district. Behavioural aberrations of political leaders across parties have documented evidence that molestation, threats, rape, murder, exhortation and suppression of women is rampant. 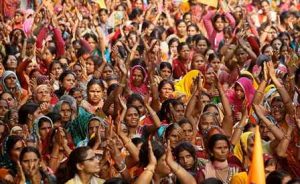 During the chief ministership of Biju Patnaik during 1990-95, the landmark 73rd and74th Amendment took place which led to decentralisation of powers for the Panchayati Raj institutions (PRIs) and Urban Local Bodies (ULBs). More than 25 years hence, there is a need to introspect the functioning of PRIs and ULBs in the state.

In a desperate mood to capture power, a reality that stays is that key positions of the PRIs and ULBs are dominated by family members, relatives and friends of MLAs and MPs. As a result, Zilla Parishad, Block Panchayats, Municipalities and N.A.Cs are losing democratic values.

In fact, Biju Patnaik, when he was the Chief Minister, reserved 50 per cent seats in PRIs and ULBs, in an attempt to empower women in the state. This led to promote proxy leaders in PRIs and ULBs where husband, in-laws, fathers, brothers etc would exercise powers. Such family members only continue to seek greener pastures to field their near and dear ones in PRIs and ULBs bodies.

Even his son, the current Chief Minister who has served Odisha for four consecutive times and is vying for a fifth term in power, has failed to provide PRIs any makeover. Every year, March 5, also the birthday of Biju Patnaik, is celebrated as Panchayati Raj Divas across the state but mostly remains an event.

Red beacons were gone in mid-2017, but the benefits remain for MLAs and MPs. Pension, insurance and medical benefits to spouse and an additional security cover for family members if females are getting elected continue.

“Habituated to getting benefits, freebies and compensation, the mindset does not seem to change anytime soon. These also include additional benefits like travelling abroad on official passports, providing dependant visas, protocol and consular access at Indian Embassies, security cover in foreign lands etc.”

When the current Chief Minister came to take power in 2000, he shaped Mission Shakti, a movement for poor women. Now, Mission Shakti has grown as a wide movement with 70 lakh women members of six lakh self help groups (SHGs). After promoting livelihood programmes in SHGs, Odisha Government seems to provide lateral growth among women through nurturing leadership.

Violent Conflict in the Countryside: Case of the Philippines