When National Security is at stake, should India’s narrative be War or Peace?

It’s true that ‘fighting a war in the battlefield is different and much dangerous than proclaiming and fighting it on the social media’ but equally true is the fact that ‘sometimes war or war-like situations become inevitable for the long lasting peace’ especially when a nation’s national security is in danger. 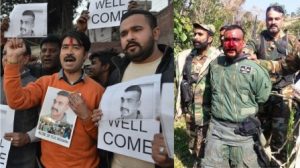 In the past few days, South Asia is witnessing an extreme wave of hatred between its two important regional players, India and Pakistan. Since the Pulwama attack on February 14, 2019 on a CRPF convoy by Jaish-e-Mohammed to the Indian Air Forces’ (IAF) air strike on February 26, 2019 in the Balakot region in Pakistan which was considered to be one of the major breeding grounds for terrorists, a lot has changed when it comes to geopolitics within the region.

The notions of war and peace took new dimensions in South Asia when a Wing Commander of the Indian Armed Forces, Abhinandan Varthaman, was captured by the Pakistani Army when his plane in an encounter with the plane of the Pakistani Armed Forces (PAF) crashed and he landed on the other side of the LoC. Since his capture by the Pakistan army, tensions escalated between the two countries and owing to the pressures from the international community and as per the Geneva Conventions, Pakistan declared to release the Wing Commander back to India safely on March 1, 2019. Pakistan declared this act as a gesture of “peace” instead of accepting the reality that it had to release the Wing Commander owing to the international norms.

“Amidst this, a simultaneous wave of ‘war’ and ‘peace’ engulfed the social media platforms. Popular hash tags like #SayNoToWar, #BringBackAbhinandan etc. were trending on Twitter and Facebook.”

However, a question that is emerging out of all this is, should there be a war or should there be peace prevailing in the two countries? Well, an answer to this question is not that simple and easy as it feels to proclaim on social media but yes, amidst all this, the notions have become more political in nature instead of being more practical.

Some sections of our Indian community, out of “some” concerns, believes into maintaining peace and saying no to war and changing the national narrative as if India is interested into waging a war against Pakistan. This indeed needs clarification and facts need to be revisited again.

In a situation where India has been witnessing and suffering from forms of terrorism for over many decades, it’s high time when India should actually be concerned about its national security, particularly at the borders. Pakistan has been the breeding ground for terrorists for over the years and this reason primarily stands as a rift in maintaining cordial ties with it.

When 40 Indian soldiers of the CRPF convoy were martyred, it was not just a terrorist attack but it posed a threat to our national security. And if any country faces such a threat, it has all rights to protect its territorial integrity by retaliating and giving a befitting reply and this is exactly what our armed forces did on the morning of February 26, 2019.

The Indian air strikes that were carried out were aimed to eliminate terrorist spots with zero civilian casualties. Some in India call this a war and some label India as a war-mongering nation. However, it isn’t a war but a tactical skill of showing your enemy how powerful as a state you are and this was perhaps required because the loss of a soldier is a loss to a country’s integrity.

Sadly, many in India have made this entire discussion revolve around Prime Minister Modi and the upcoming elections. However, what they fail to realise is the importance of leadership in a country when PM Modi gave a free hand to our armed forces to take any necessary steps for the protection of the nation’s sovereignty and integrity. It’s true that ‘fighting a war in the battlefield is different and much dangerous than proclaiming and fighting it on the social media’ but equally true is the fact that ‘sometimes war or war-like situations become inevitable for the long lasting peace’ especially when a nation’s national security is in danger.

India openly declares that it has no problem with Pakistan as a country but it has problems with Pakistan as a nation breeding terrorism on its soil. India has always followed a policy of ‘no first use’ or ‘no first strike’ but when situation like the Pulwama attack happens, it’s important that India views it seriously in the light of its national security thereby taking concrete actions, no matter if it involves resorting to hard power.

“When India is in the dire need of unity, some Indians are labelling the fellow Indians as ugly who are calling for war, however, they fail to see and realise something more serious and that is how countries like Pakistan who are sponsoring terrorism, are instigating a peace loving country like India to resort to hard power in order to protect its national security.”

At last, any country has all rights and power to protect itself from any form of danger and by any means, even if it involves the use of hard power. It is the right time when India should send this message that the country is perhaps the largest peace-loving democracy in the world believing in the soft power diplomacy but if anyone or any country infringes upon India’s sovereignty and integrity, India has full potential to retaliate back in any form including hard power.

The writer is a PhD Research Scholar with the Centre for European Studies, School of International Studies, JNU, New Delhi. She can be reached on twitter @MonikaGupta0107

Young Doctors must work in rural areas before getting their first promotion: Vice President