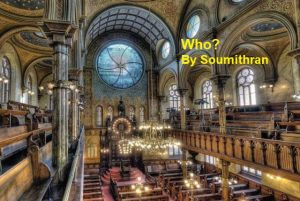 The train was speeding through the hot summer at the maximum speed it could achieve. I was travelling in the second-class compartment. The little kid of the young couple sitting opposite to me was a bit too enthusiastic and quarrelsome.

On his excitement over the sights beyond the window and amidst the quarrels he picked up with his parents, his foot banged on to mine unwittingly. Neither of his parents seemed to be bothered about their son, stamping the foot of an elderly person though unintentionally.

My annoyance urged me to corner the guy. “May I know your good name sir?” I asked him.

Even though a little baffled, he said his name.

“In which class are you studying?”

“Uncle, what is your name?”

As my name did not imply any religion, he dodged through the curious looks of his parents.

Unfazed, he popped the next question:

I added frightening pitches of low growls in my voice and uttered:

Confronted by unfamiliarity, all of them stuck their eyes to the blurs outside the window.

The boy kept flashing glares at me now and then.

Ajith Narayanan aka Soumithran, a retired engineer, is a cartoonist and short story writer.