Experts and parliamentarians from European and South Asian countries discussed at the global conference, how the SDGs can be implemented with increased participation of the parliaments.

The 2030 Sustainable Development Agenda is at the centre of global development policy, and 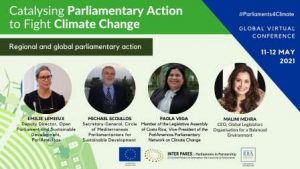 parliamentarians are now taking a lead in ensuring that national policy frameworks, and parliamentary oversight, are guided by the Sustainable Development Goals (SDGs). One aspect boosting further action is global parliamentary networks, which are assisting national parliaments to incorporate SDGs into their work.

The SDGs, which were adopted at the UN General Assembly Summit in 2015, focus on UN Member States and governments as the key stakeholders for their implementation thereby making the entire process ‘government focused.’ As a parliamentarian, there is no permanent hook onto the process, and it depends on the governments how much they wish to include legislators.

Former and current European MPs, speaking on the 2nd day of the global virtual Conference on Parliamentary Action to Fight Climate Change, an event organised by INTER PARES, European Union’s global project to strengthen the capacity of parliaments, suggested that one method of ensuring parliamentary oversight into the implementation of SDGs is to create an inter/intra parliamentary forum that can raise awareness. “My experience at the Danish parliament taught me that there needs to be a forum to raise awareness about the 2030 agenda, and what the role of parliaments can be in that agenda and its implementation process,” said the former Environment Minister and Denmark MP Kirsten Brosbøl.

Founder of Parliamentarians for the Global Goals, which works with MPs globally to dissipate information about SDG implementation, Brosbøl added that developing a structure inside the parliament is also essential. “The development cooperation committees and the standing committees should take responsibility and ensure that they are part of accountability and oversight towards the government. In Denmark, one milestone we achieved was to have a budget committee set up on the SDGs to primarily focus on the progress being made during its implementation,” she said.

A concrete step that Brosbøl suggested was to have a clear structure for oversight in the parliament about which committee or all-party group has the main responsibility. “It is critical to make sure that there is one place where implementation is being monitored,” Brosbøl said. The Denmark Parliament has also developed a set of national frameworks to supplement the global UN SDG indicators and ensure that the agenda is localised and can be measured with more relevant data in the country context.

“This is critical because as the 2030 agenda mandates all countries to identify their own national targets, to ensure sure that this is not merely a beauty competition but a universal agenda,” she added.

Since approving and disapproving a budget is a key function in legislatures, Brosbøl recommended parliaments to have mechanisms to screen the budget against the SDGs cycle.

A total of 17 SDGs and 169 targets are part of the 2030 Agenda which came into effect on 1 January 2016, and were formulated after a rigorous consultative process that brought national governments and millions of citizens from across the globe together to negotiate and adopt the global path to sustainable development for the next 15 years.

Helmut Berger, Head of Parliamentary Budget Office, Austrian Parliament, suggested that parliaments should have structured debates on SDGs. While the Austrian Parliament deals with SDGs on several levels and in several committees, a more recent development in the country was the establishment of a parliamentary SDGs monitoring mechanism. “The parliament now requires regular reporting from the government and individual ministries on the progress of SDG implementation. The records should be debated in respective committees so that it is not a silos form of discussion,” he said.

Berger further added that the parliament mandates every committee to have a debate on their share of implementing the SDGs. SDG preparation is also a part of the Austrian Parliamentary budget. Explaining the Austrian performance budgeting system, he said, “Our budget consists of performance objectives, measures to implement this objective, and indicators to monitor it. And since the 2021 Budget, each outcome objective in the budget should be linked to a corresponding SDG.” The Austrian Parliamentary Budget Office, which Berger heads, analysed the SDGs and compared them to the European indicators.

The parliamentarians and experts were speaking on a panel organised by Inter Pares, titled, Catalysing Parliamentary Action to Fight Climate Change which discussed climate action from the perspective of different parliamentary functions (legislation, budgeting, and oversight), regional and global cooperation, citizen engagement, and SDGs implementation. The discussions provided a powerful package of ideas and tools for parliamentarians to use, in a two-day virtual conference on May 11 and 12.

“The climate crisis has to be seen relates to biodiversity loss lack of food security, water stress, and resource depletion, and so it has to be seen in a broader frame. In 2050, we hope for climate neutrality but we have to fix other crises too,” said keynote speaker on the 2nd day, Mr Saber Chowdhury,  MP from Bangladesh and Chairman of Bangladesh Parliament’s Environmental Committee. As an MP, he pushed for a resolution declaring the climate crisis as a planetary emergency in 2019.

Chowdhury further stressed that since governments often respond to the global ambition of solving the climate crisis with a 4–5 year term solution because of the election cycle, it leads to failure of impact. “A long-term perspective to climate goals is missing, which can be envisioned by parliamentarians. In such a case, they must have the independence e of thought. We cannot be mere mouthpieces,” he added.

The Global Legislators Organization for a Balanced Environment is one such group with an international network of MPs committed to sustainable development and climate action. CEO Malini Mehra added, “We have effectively created an international architecture on climate change. Today, internally, we have more than 4000 pieces of legislation and measures related to it. Parliamentary committees and legislation that is predicated on legally mandated targets have proved to be most critical for implementation.”

Mehra also recommended merging climate-related panels in parliaments. “In many countries, the issues for climate change and disaster reduction are looked at simultaneously. In Finland, for example, there is a committee on climate risk and disaster risk management,” she said.

Panelists also listed citizen engagement as an essential ingredient for the implementation of climate crisis solutions. While listing out several youth-based environmental movements that began in front of the international parliaments, such as the Greta Thunberg-Fridays for Future movement, they said that it can be fruitful in assuring long-term action, as well as informing MPs about local climate emergencies.