Earthquakes, often followed by tsunami is if the epicentre is at the seabed, however, create colossal destruction and loss of life.

An earthquake is a natural disaster that cannot be predicted. However, seismologists can estimate 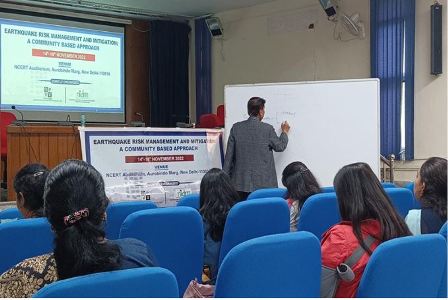 where earthquakes may be likely to strike by calculating probabilities and forecasts. Scientists can get additional information by digging trenches to examine the geological record of earthquake ruptures in ancient history.

Tsunamis often follow earthquakes if the epicentre is at the seabed; however, they create colossal destruction and loss of life. That loss can be partially minimised by creating awareness among people of its mitigation tactics and risk management measures.

A five-day Training of Trainers Programme on Earthquake Risk Management: A Community-based Approach was inaugurated today at the National Council of Educational Research and Training (NCERT) Auditorium, New Delhi. This has been jointly organised by Vigyan Prasar, an autonomous organisation of the Department of Science and Technology, Government of India and the National Institute of Disaster Management (NIDM), Ministry of Home Affairs.

It is expected that the training would unveil pathways for more advanced training for urban preparedness along with the emergency response to earthquakes and other such disasters.

A team of experts from NDRF will organise a session on First-aid and CPR after an earthquake to sensitise the masses on the preventive measures. An important issue often overlooked during any disaster is ‘communication and disaster risk management. A session has been planned, so people understand the importance of communicating effectively and avoiding creating panic or rumours. The workshop will end on 18 November.