A Single Tap Made Someone Brave 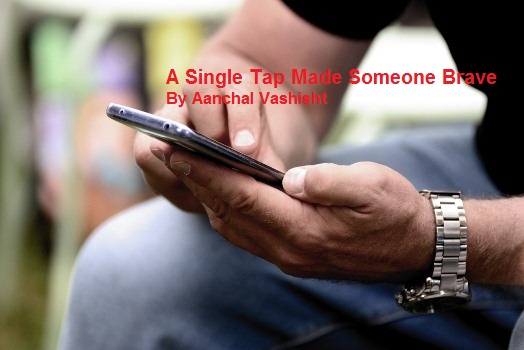 Somewhere in a far-off land

Can question your self-worth.

Are we giving at least one person

The meaning to live and to feel alive?

Are we not ignoring that passé quote

Someone wrote for the people who arrive?

Designed and served in odd colors?

There’re no likes, no shares;

So we do the same.

What’s the harm in following others?

Even himself isn’t bound

To revisit his post because he brought it for nothing.

What if he was broken

Because there isn’t anyone

Who shares his emotions.

What if a betrayal struck him lately

And he is in dark ever since.

What if he’s lost all the hope

So one day when prone lying on his shabby couch

He bumped into this tool that let him grouch

To himself how bad he can be

Through this ugly design

And he posted it! (He is surprised.)

What on earth, God knows, hit his head?

Will he ever be afterwards even fine?

There are hundreds of views

So, expect no stay

But, surprisingly, you did it –

The stretch of surprise was what

Did it hurt? Did it ask for much effort?

Your single tap and it made someone brave.

The author is a Content Writer and Editor. Her love for and learning about poetry has made her believe that the poetic art is even visible in the best prose pieces. When she is not with her pen and notepad, you’ll find her reading classical novels and watching movies to learn how the storytelling works. She can be reached @VashishtAanchal