A Stand alone among the political alliances

Tamil Nadu could swim against the tide when the country sailed through a massive Modi wave in the recently concluded Lok Sabha Election.

Responding with the poll result in the TN, the MP from the state and daughter of the ex CM M 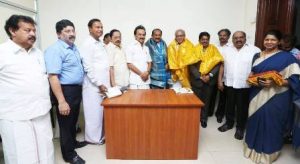 Karunanidhi, Kanimozhi said that the state stands alone among the other parts of the country which massively voted for the BJP alliance.

The DMK alliance since the death of Jayalalithaa, who successfully brought her party, the AIADMK, to power for the second consecutive term in 2016, seriously bulldozing the party, swore even to bring down the government. It has aimed at the BJP government which allegedly tried for protecting the AIADMK government. Demon and other debacles of the BJP were under continuous attack by the party which aligned with the INC. In fact this paved the way for the landslide victory for the Secular front in the state. Of course, mainstream and social media too assisted the DMK for the win in a big way in the state.

In Tamil Nadu though the BJP and AIADMK had developed mutual indirect relationship it has not been openly declared that they would seek alliance in the Lok Sabha elections. Further, adding PMK, DMDK and other minor partners did not go well with voters. It has echoed in the result as well. The poor performance was due to mismanagement of the campaign and lacklustre response to DMK alliance which was bomb shelling the Modi government. Cohesiveness in the BJP front was lacking since the alliance was made at the end of the term, just to seek electoral gains.

Also Read : Indian Opposition Towards On An Undefined Path

Earlier, most of the alliance partners were seriously criticising the TN government for its failures or harsh handling of opponents in Sterlite, Expressway projects in the state.

DMK was in alliance with the Congress since 2016 assembly election and had working relationship with other parties including Left parties in Parliament in opposing the BJP regime on several issues. Hence there was a continuation in the alliance. But in the case of AIADMK it was not so. Moreover, there was a big apprehension over the functioning of the AIADMK government since it was Jayalalithaa who had the mandate, not the new EPS-OPS combine. Consolably, the retaining of power by the duo with winning 9 out of 22 assembly seats in the Mid-term poll was a remarkable comeback. It is widely considered that the secret behind the alliance was to win comfortably in the assembly segments. Presence of PMK really helped in winning few constituencies. But overall losing of 13 seats to DMK which was originally held by the ruling party is a real loss.

The present Lok Sabha election also brought out a mandate against many state governments’ performance. Anti-incumbency was witnessed not alone at Hindi Heartland where the Congress usurped power from the 15 year long BJP rule in Rajasthan, M.P. and Chhattisgarh, but also in A.P., West Bengal, Kerala, and Karnataka . In Tamil Nadu it was the campaign by the DMK and its supporters that made public believe that Rahul would become the PM. As a result the state stands alone in the country. 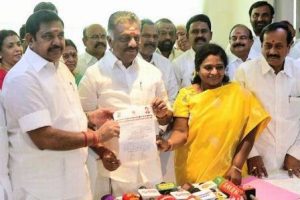 Though Kanimozhi said that the state stands united against Modi and his policies and programs, the party has to sit in the opposition after the disappointed performance of INC. The grand old party has been denied once again to attain the status of principal opposition without requisite number of 54 members. The 37 members of DMK alliance has to work the constructive opposition’s role to get a good name among their voters. However, bringing new schemes of projects is not easier because of lack of power. In contrast the AIADMK shall have the NDA ministerial support along with the state government.

Some allies of DMK besides the Left and the Congress may switch over to NDA camp though not immediately to serve better to the public interest. Such deeds would bring more embarrassment to the DMK. There are two chances where both the Dravidian parties would score equal success in the ensuing Rajya Sabha elections. Hence AIADMK may get some ministerial berths. In addition the elected Kanyakumari member H Vasantha Kumar (famous hire purchase chain store Vasanth & Co founder) has to resign his assembly seat and one bye election will be on due.

Meanwhile, the countermanded Vellore Lok Sabha poll is also to be held shortly. It will be a bonanza for the ruling party since the trend has been changed by Modi’s victory at national level.

Beyond all political calculations the centre-state relationship will be not under strain any more. The state is yet to get its due share in Cauvery river water and the raising the height of Mullaperiyar to 152 feet is still debated. The state has to seek intervention of the PM in both the cases where the SC judgements were in favour of the state. Karnataka and Kerala which are the two states involved with the dispute has INC-Janata Dal (S) government and Left Democratic Front government respectively. Escalation of further disputes would put pressure on the DMK alliance partners, INC and the Left to convince their counterparts to find an amicable settlement. Otherwise their policy of upholding the national interest would be seriously jeopardised. Moreover, their antagonism against Modi and his party’s nationalism would be considered just as a political gimmick. Either they have to achieve some thing or to resign collectively to prove their commitment as true. There would be more tough situations on the anvil rather than water disputes to test the alliance. Issue may differ; but the contradiction would decide the fate. Therefore the environment would be a different altogether.

This would be a stand alone among the unity in reverse.

The Roadmap of Renewable Energy Development in India