Farmers’ suicide, students’ suicide, female suicide, and so on – India accounts for highest share of the world’s suicides. It is high time for political actors to address suicides, as a public health emergency and its prevention.

India faces a high burden of suicide deaths. Motives and causes are many, but a lack of empathetic approach is the main reason. Usually seen as an ‘easy way out’, the society’s failure to look beyond stigmas regarding struggles takes many lives.

The pre-eminence of religion and more importantly caste in India is something that is reflective not only of its culture but also the mortality rate with respect to deaths caused by suicide. The upper classes usually frown upon reservation that the lower classes derive by virtue of their socio- economic situation and lack of access to opportunities in the past.

Caste based discrimination becomes a rather sad reality of public institutions, from Vemula ending his life in 2016, to Dr Payal Tadvi of Maharashtra succumbing to the ill-treatment and hostility surrounding her work environment. Caste continues to be a hindrance to the lives of these people. Social mobility becomes impossible when patients to doctors constantly question their credibility. Not realising that beyond the reservation offered to them, they still have to be a part of an all-inclusive classroom, where they work within the competition. If one traces back to the Thorat Committee, a committee designated to look into harassment faced by students from scheduled castes and tribes, findings of 2007 found great scale of segregation even in the prestigious medical institution like AIIMS.

The lack of initiatives by the Indian universities becomes a door to constant questioning of students from EWS categories, of their competency and merit.

Education in India stands as a source of emancipation, from the shackles of a deprived livelihood. With this notion in mind, comes a pressure to perform well, within the largest pool of students. Each of whom does not want to settle for less. Be it poor grades in board exams, to ragging in engineering institutions. The increasing rates of suicide prove a certain kind of normalisation with the act. The fact is that when they cannot seem to cope with the demanding situations at an institution, they would resort to this. This is nothing but due to the lack of discussions on struggles of mental health.

Motives behind suicide are many, from psychological distress to depression. Freud’s death drive is a representation to understand the correlation towards depression and aggression. Depression being directed towards oneself, turns into aggression in an outwardly manner, when one seeks destruction in the form of death.

Mental health and the stigma surrounding it has become an important discussion over the years. From movies to people of influence sharing their stories of struggle, efforts to empathy with regards to mental health are on the rise. One’s story could be another’s reality; with that in mind, the idea of a common experience of helplessness with people from the same society comes up. This is wherein one can draw strong links between the societal structure and expectations that come with and the idea of people taking their own lives. Hierarchies and the weaker integration of the modern day society result in failure of the society in being able to provide a wholesome environment, where each person’s contribution and existence are valued.

With more and more people seeking comfort in therapy, we can see the prominence of Persistent Depressive Disorder (Dysthymia) as well as Schizophrenia in India than in the west. Among the younger strata, the suicidal behaviour was with gender differentials. The lack of independent decision making and vulnerability of women become reasons for the rise in female suicide in India. One too many times, they’re also victims of sexual abuse and assault.

Other correlates of suicide could be family problems, property issues, drug abuse and addiction, sudden change in economic status and dowry disputes. These problems stand as a mirror to the problems and pressures one faces in a society.

Mass suicides are a rather rare occurrence but usually are attributed to ideas of religious occults and beliefs. This we recall to the horrendous Burari deaths case of Delhi in 2018. More often than not, internet and media do have a role to play in this kind of an influence; cyber-based suicide pacts stand as an example to this. Copy-cat suicides are also a result of local knowledge and replication of a certain form of suicide.

The Lancet Public Health studied the gender differentials and state variation in suicide deaths in India. Their research on the Global Burden of Disease was based on data from 1990 to 2016. The younger demographic, between ages 15 and 29, has higher suicide rates, ranking first.

Gender differences in Suicide Death Rates (SDR) point out those women make more suicide attempts than men. The concentration of these lies in married women.From an early marriage to domestic violence, reasons amounting higher rates of suicide amongst women are also based on a socio-demographic context, norms of regression that follow.

There needs to be an intersection between suicide and sexual as well as reproductive health. Laws pertaining to curb this have also been enacted, such as Protection of Women from Domestic Violence Act (2005). India also launched its National Programme for Adolescent Health in 2014, with an aim to address mental, sexual and reproductive health. From teenage pregnancies to depression and violence have been analysed but it does not focus on suicide ideation.

Amongst men, overall suicide rates are not paid as much attention by policy makers as farmer suicide rates. A reason to this could definitely be the role they play in circulation of food resources.

Various factors become an easy target to their profession leading to psychological distress at the peak of which they decide to end their lives. From marginal to small farmers all are affected by reasons like an increase in the cost of cultivation leading to a rise in labour costs. From climate change to land disputes, many hindrances come in their way to production.

Though the primary cause of the rise in farmer suicides is unpaid loans, the hierarchy and power of money lenders act as a source of pressure and fear for these farmers. The inability to provide for their families becomes evidence of the failures of the government to provide for its people. A solution to this usually, is loan waivers. Crop failure and no tangible change in the economic state of the farmer, questions the implementation of these policies.

The framework of laws and policies from time to time aims at curbing the suicide rates. A defining moment regarding this became the decriminalisation of Section 309, of the Indian Penal Code in 2014. Motives behind decriminalising suicide can be recognised as two fold, the primary being the idea of not regarding those who attempt/commit suicide as criminals. With this comes the second aim of receiving true data with respect to suicide rates. According to the National Crime Records Bureau (NCRB) data, suicide is usually underreported due to the fear of punishment. Registering deaths is particularly inefficient in rural areas. Nor do the families want to initiate post mortem, due to the mutilation the body undergoes within the process.

Decriminalisation was expected to have a major role in access to mental health treatment and reduction in underreporting of cases. The relatively recent discussion regarding mental health brought in the advent of Mental Health Care Act 2017.

“Mental healthcare” includes analysis and diagnosis of a person’s mental condition and treatment as well as care and rehabilitation of such person for his mental illness or suspected mental illness. With respect to Section 309, it regarded those who attempt suicide to have severe stress and aimed to provide care and treatment to them. It initiated the creation of central and state level mental health authorities. Its route to destigmatization of mental health problems was based on the principles of community living and equality. 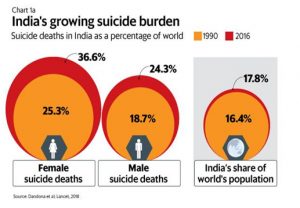 India contributes 16.4% of the world’s 17.8% suicide burden. One wonders whether these initiatives are in line with the projection for the SDG 2030 target. With WHO’s Mental Health Action Plan (2013-20) nearing its end, a comprehensive suicide prevention strategy is the need of the hour, on a national level.

The writer, a policy researcher, is an undergraduate student pursuing Sociology from Jesus and Mary College, Delhi University. She can be reached on twitter @GayatriSarin

A Stand alone among the political alliances