The Child Rights and You (CRY) mentions one-fourth of the Indian population to be anemic and undernourished. 40 out of 1,000 infants will never reach age 2. This is in a country that is the world’s largest producer of milk and pulses and the second-largest producer of rice, wheat, vegetables, and fruits.

In 1903, Thomas Edison said, “The doctor of the future will give no medicine but will interest his patient in the care of the human frame, diet and in the cause and prevention of diseases.” A century later, Edison’s words 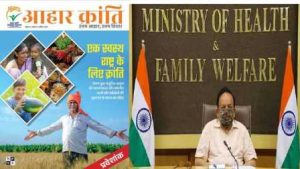 cannot be truer. Nutrition and a good diet have become the primary concern for many people given the current pandemic situation. The United Nations (UN) has declared this year as the International Year of Fruits and Vegetables. This is in line with the Sustainable Development Goal 3 about human well-being. The Indian government too understands the need for a well-balanced diet. In sync with the UN’s strive for nutrition, the government has launched the “Aahaar Kranti” initiative. The goal will strive toward eradicating India’s problem of hunger and limiting the chances of illness. It will explain the richness and requirements of a balanced traditional Indian diet. They plan to shed light on the importance of a balanced diet filled with locally sourced fruits and vegetables.

The initiative was launched on April 13 by Union Minister of Science and Technology, Dr Harsh Vardhan. For the occasion, he said, “a balanced diet serves as a special tool to reduce the impact of the pandemic’.” For the implementation, various organizations like Pravasi Bharatiya Academic and Scientific Sampark (PRABHASS), Global Indian Scientists and Technocrats’ Forum (GIST), Vijnana Bharati (Vibha), and Vigyan Prasar have come together.

The motto adopted by the mission is “Uttam Aahaar – Uttam Vichaar” which translates to Good Diet – Good Cognition. With this motto, the mission will work toward promoting knowledge of the Ayurveda-based nutritional diet. The knowledge for the same will be imparted through a curriculum. It will have answers on all the Why? How’s? and What’s? regarding nutrition. The material will be provided as a monthly newsletter by Vigyan Prasar. It would be available in Hindi, English, and other vernacular languages. Director of Vigyan Prasar, Nakul Prasar, had said that “the program will focus on training teachers, who, in turn, will pass on the message to the multitudes of students, and through them to their families and finally the society at large.”

Over the years, India has attempted many initiatives that promote having a balanced diet infused with vital nutrients.

The Ministry of Women and Child Development has a Food and Nutrition Board that conducts nutrition events annually.

It aims to educate the masses on how to include proper dietary intake to resolve the probability of future diseases. The Prime Minister has in his “Mann ki Baat” labeled the month of September as “Poshan Maah” (Nutrition month). He gave the maxim “Yatha Annam Tatha Mannam,” which means that cognitive development is directly linked with the quality of one’s food intake.

The Centre has also declared “Poshan Abhiyaan” to reduce undernourishment in children. They aim to reduce stunting, underweight, low birth weight by 2% every year. And to reduce anemia by 3% across all ages. There’s also the aim to eradicate malnutrition in India by 2022, under “Kuposhan Mukt Bharat” or malnutrition-free India. The Integrated Child Development Scheme (ICDS) is India’s largest scheme for children below age 6. For a scheme that covers half of our country’s population, the budget for it has declined by 9.6% from 2016 to 2017, going from INR 15,584 to INR 14,862.

It is well known that India is a food-surplus nation as the nation produces twice the calories it consumes. Yet, the Global Hunger Index places India in the 94th position. With a score of 27.2, indicating a “serious” level of hunger, India is far behind Bangladesh, Pakistan, and Nepal. Malnutrition causes a record one-third of child deaths. The National Family Health Survey estimates 38.4% stunted children and 21% of children are wasted; child mortality too is at 3.7%. Apart from children, women and men also face malnourishment at 23% and 20%, respectively.

India is gripped by a severe problem of hunger. It is the home to the world’s largest population of hungry and food-insecure people. According to FAO, 200 million people in India go hungry. India is the only country on the Global Hunger Index (2008), which despite having a good GDP suffers hunger at a large scale. The other countries on the list are:

Table 1. GDP per capita in relation to scores on the global hunger index 2008

The Indian State Hunger Index of 2009 compares hunger across all Indian states. The ISHI report studying 17 states out of which 12 falls into an “alarming” category. Madhya Pradesh on the list falls into the “extremely alarming” category. This points out that there is no correlation between states with good economies and there is a possibility of widespread hunger. It also enforces the idea that at the state level policy creation and implementation are crucial.

In the book Poverty and Famines (1981), Nobel laureate Amartya Sen has pointed out “exchange entitlement decline” as a reason for widespread starvation. Despite it being a theory, it gives an answer to the question of how some Indians go hungry when there is twice the amount of food in the country. The marginal and small farmers on an individual level are not being able to produce food that can last adequately for the entire year.

As such the government should focus on helping the marginal farmers to grow more crops. An alternative source to gaining food should also be in place when faced with crop failure. Access to PDS needs to be a smooth and glitch-free process. The Anganwadi closed because of the pandemic, should start its operation again. Cheap canteens too should be provided where one can have access to cooked nutritious food at a subsidized price. An example of this model is the Jadavpur Jyotidevi Shramajeevi Canteen, which has been running successfully for more than 200 days.

The Child Rights and You (CRY) mentions one-fourth of the Indian population to be anemic and undernourished. 40 out of 1,000 infants will never reach age 2. This is in a country that is the world’s largest producer of milk and pulses and the second-largest producer of rice, wheat, vegetables, and fruits. India should make a considerable effort in reducing this gap as food is a basic human right.

MOXIE Generates Oxygen From Carbon Dioxide on the Red Planet