To retrieve its self-sufficiency, India must turn back to organic farming and maintain its diversified crop varieties and provide staple food to make agriculture sustainable. 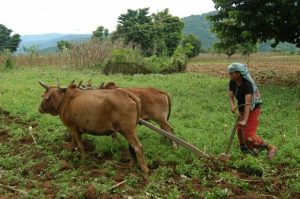 F armers have put forward their issues including the implementation of C2+50 against MSP – a recommendation by M S Swaminathan Commission – and have raised issues of crop insurance and loan waivers which shows the hard reality of farmers across the country. Reportedly, the 2015-16 Census notes that small land holdings make sustainability impossible.

Back in the year 2016, speaking about a similar Census of 2010-11, the Agriculture Minister Radha Mohan Singh at a National Convention on challenges in agriculture and future strategies for sustainability at Jabalpur said that 91 per cent of the holdings would be under small and marginal farmers by 2030 and that the country needs new methodologies to sustain farming. “The estimates indicate that small and marginal farmers may account for more than 91 per cent of farm holdings by 2030. The continuously declining farm size also gives rise to concerns on the very sustainability of the small farm,” Singh said.

“Such low holdings gain as they provide food security to the nation, even though they possess only 44 per cent of total land holdings. Besides, they beat large scale holdings in terms of productivity. However, they fail in marketable surplus and profit. Hence, the agrarian crisis is inevitable.”

Considerable number of large landlords who once ruled the farming landscape, before the green revolution, had influence in politics. Many of them switched over to other lucrative occupations as their generations got good education and jobs. Rural India also witnessed a change as pressure mounted on age-old feudalism and caste oppressions. Urbanisation provided opportunities but the farming community was under pressure.

“During the last fifty years, green revolution quickened land fragmentation and led to disowning and selling off land to others that included money lenders and corporate farm companies because of continuous loss in the profession.”

A survey reported that nearly 40 per cent of the farmer respondents were willing to quit farming due to various reasons.

According to the Agricultural Minister, Radha Mohan Singh, the small holdings would not be fit for innovation as they are needed in “genomics, quality seeds, rain-fed agriculture, farming systems, conservation agriculture, farm mechanisation, non-conventional energy sources, health foods, fodder and feed, along with enabling policies and effective delivery of services, supplies and markets.”

“The state care for the sector has, in fact, reduced as it had registered a decrease in sectoral contribution in GDP from 2004-05 to 2013-14 by 1.8 per cent under constant price, according to the Census.” 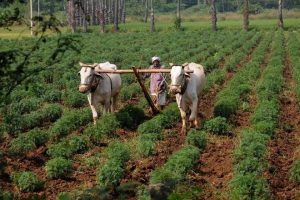 Therefore, the availability of land for cultivation has since been significantly reducing, hinting at a looming food security crisis. The land degradation is mainly because of soil erosion and water logging.

Several critics of green revolution indicate that the usage of chemical fertilisers and pesticides weakened the soil strength and caused soil erosion. Depletion of ground water is another issue which forces farmers to go off farming.

Which way will the state take?

The state already has several choices before itself. It need not search for anything new or ground breaking.

First, as it is widely agreed, it can revise the MSP to incur additional returns to farmers but with a bit of inflationary pressure. Since the GST regime has kept out most of the essential food items either at zero or at five per cent slab, inflationary pressure would not be really high.

“Secondly, it can radically and tactically withdraw the entire MSP regime and subsidise the farmer when surplus production causes price fall at markets based on recommendation received from an expert team.”

Farmers could be brought under information centres through the Digital India scheme to procure information about future market conditions which can help them while making crop decisions like which crop to sow etc.

“Lastly, the State can seriously pursue organic farming. India has already launched Paramparagat Krishi Vikas Yojana under which 10,000 organic clusters would be developed on five lakh hectares of land through providing chemical-free inputs.”

It has also decided to provide Rs 50,000 per hectare for three years towards conversion and adopting organic farming and towards market assistance for every farmer belonging to the respective cluster. Instead of such phased conversion, the state can launch a nation-wide programme by utilising bio-manures produced through solid wastes generated by urban centres in the country.

Four cities – Pune, Bangalore, Solapur and Chennai – have bio-methanation and manuring facilities and produce manure of about 100 tonnes per day.

Once the Central Government encourages all the urban regions which have more than five lakh population to segregate solid wastes, manure of million tonnes with natural and nutrient-rich solutions will enrich the soil.

As the average land holding by farmers in India is just 1.15 hectares, (remember that 86 per cent of the farmers hold less than two hectares of land) it will not be a herculean task to complete the process and make the entire agricultural holdings as organic within five years or a decade.

“But the pertinent question that stays is whether the state governments and local urban bodies are prepared to accomplish this?”

Another issue is the huge import of pulses and cereals and meagre production of millets (that forms the staple food for millions traditionally) which makes millions deprived of healthy food.

It is a known fact that most of the Indian farm fields are rain-fed and production of millet suits the region.

To retrieve its self-sufficiency, India must turn back to organic farming and maintain its diversified crop varieties and provide staple food to make agriculture sustainable.

The policy paralysis has created this unwarranted crisis raising questions on our food security. It is the right time to address them.

Ultrasound – a killing machine in India?