Politics is always being played in Assam over the NRC at the cost of peace and development, while internal security remains a national concern.

With the release of the final draft of National Register of Citizens (NRC) on 31 August, this year, uncertainty lurks over Assam. The tedious and long-drawn process of finding out who is a citizen of the country in Assam has wreaked havoc in the state with 1.9 million excluded from the Indian Citizenship list. This event has engendered strange events in the state leaving even the progenitors of NRC dissatisfied. Raking up the loosely knit fabric in Assam has evoked the politics of identity, which otherwise had existed but was dormant.

While calling the latest NRC faulty and the process farcical, one must remember that several factors have contributed to forming the citizenship list. The various governments from time immemorial till date have paved way for the status of the register today. The uncertainty that prevails over the fate of lakhs in Assam is contributed by the decisions of governments of yesteryears too, apart from the current government. But it is necessary to point out the confusion of government as to what could be rendered a solution to the lakhs who could be announced stateless.

The National Register of Citizens in Assam is the list of Indian citizens in the state. The register was set up in 1951, after the census of the year, to weed out illegal immigrants from the state amid an unabated influx of migrants, especially from Bangladesh.

Although there have been numerous incidents that have laid the path to the final draft of NRC published this year, a sequence of some of the historical events is influential.

After the inception of NRC in 1951, the state witnessed an anti-foreigners movement. This was followed by the submission of a memorandum by All Assam Students Union (AASU) demanding the updating of NRC.

As a result, the Assam Accord was signed in August of 1985, which put forth a set of resolutions to be followed to solve the immigration issues in Assam. But, many of the clauses within the accord are yet to be implemented.

Although the first decision by the centre to update NRC was taken up in 1999, later in 2005, under the then Prime Minister Manmohan Singh, the modalities were approved by the centre in consultation with Assam government.

In 2013, a petition filed by an NGO from Assam came up for hearing; as a result, the court directed that the process of updating NRC should start. But the actual updating started only by February 2015. In 2017 and 2018, two drafts were published where around 40 lakh people were excluded from the list.

In the final draft of NRC published in August this year, 19 lakh people are excluded out of the 3.29 applicants.

Is the Process Fair?

International media has already started the process of NRC draconian. It has paralleled this process with that of Mexican migrations to the US and migrations to the European continent. Comparisons are also drawn with that of Rohingya crisis in Myanmar. Both Assam and Myanmar accuse their lands being migrated by Bangladeshis, but in Assam with a bigger magnitude in numbers. Clarion calls for deportation, detention and disenfranchisement for those excluded from the list, and this reverberates the policies adopted by various other governments across the globe. 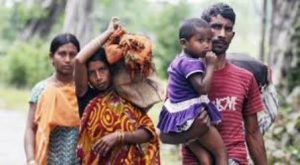 Reports also claim that the inconsistencies in NRC are a fault in the system. Proving citizenship is made a stringent process. It requires proving that the applicant or their ancestors lived in Assam before 1971. They are to produce a legacy data for this, proving the linkage with their ancestor who lived in the country before 1971. Mainstream media is also awash with the names of genuine citizens excluded from the list.

Results of this exercise (proving to be a citizen) has many times become beyond real. In a case, a father was declared a foreigner, whereas his son qualified to the list. In another case, a six-year-old girl qualified the list, whereas her twin was rejected. Even a mistake in the spelling of the name could render the applicant a foreigner.

Although the BJP government brought up the issue of NRC, it has not been their initiative originally. The BJP has raised clamourabout the illegal migrants with the current home minister calling them infiltrators and comments that not one of the illegal immigrants will be allowed to stay in the country.

But it should also be mentioned that Congress has raised a similar clamour too before.

The Congress revived the already existing debate of infiltrators in Assam when it was in power in 2005 and the state was going for polls the same year. The issue came up later before the 2011 elections too. Report of clashes broke out where a Muslim man was allegedly murdered.

Once again the issue of NRC was raised in Supreme Court in 2013 and elections were due the year after.

With the final release of the list, the government is blamed for a humanitarian crisis but the government itself has not welcomed the results well. They are seeking a review of the list and reports even say that they might discredit the whole exercise.

People excluded from NRC are given 120 days from the date of publication of the final NRC to challenge their case at a foreigner’s tribunal. But the government has not specified as to what will be done with those failing their case in foreigners’ tribunal.

Deportation and detention centres seem to be the choice left for the government. A detention centre, according to reports, can hold roughly up to 1,000 detainees. There is no clarity on what next if these numbers exceed. It is also not clear on how the government would deal if the applicants fail the test in court.

The court has ruled that a convicted foreigner be released from the detention centres after three years subject to certain conditions. A policy to deal with such a situation is yet to be formed. Thousands of migrants who are believed to have migrated from Assam to different parts of the country are untraceable.

Replicating NRC in different parts of the country as mentioned by the government amid such crisis seems possible but only with long bouts of hue and cry and probably may yield no result.

Although external affairs Minister S. Jaishankar has called the crisis internal, experts argue for a bilateral agreement between Bangladesh and India, while some argue for a law to safeguard the security of refugees demarcated from illegal migrants.

The writer is a freelance journalist based in Kochi. She can be reached on twitter
@rainapaul91