Gilgit-Baltistan is an occupied territory, held by Pakistan since 1947, which was a part of the erstwhile princely state of Jammu & Kashmir

Maharaja Hari Singh signed the ‘Instrument of Accession’, the legal document after which the erstwhile state of Jammu & Kashmir became a part of the Indian Union. Just after Independence, Pakistan captured a portion of Kashmir through military annexation and another portion of the state called Gilgit-Baltistan through the treachery of British officials.

Gilgit-Baltistan forms the northernmost part of the Indian Union, now under Pakistan’s occupation. The Shia majority region has strategic importance owing to its border with Afghanistan, China and Pakistan’s state of Khyber Pakhtunkhwa. To check on the communist USSR, the British got Gilgit Wazarat (district) from the Maharaja on a lease for 60 years. It had already stationed a British resident in the region. The region was under the Gilgit scouts.

With Indian independence, the region was restored with the Maharaja. But the earlier arrangement stayed until a new one was chalked out. And when the tribal Pathan infiltrators invaded and annexed a large portion of the state, the British resident at Gilgit, Major William Brown, who owed his allegiance to the British resident at Karachi and not to the Maharaja, revolted. Maharaja’s governor Brig. Ghansara Singh along with a number of Sikh and Gurkha soldiers were killed; which was a way to tell the rebel forces to come and capture the region. This is how Gilgit-Baltistan became an occupied territory under Pakistan’s control.

The Shift in Identity

After India abrogated Article 370 from its constitution and changed the status of the state, Pakistan on multiple platforms has expressed its opposition.

Also Read : Article 370 Has Its Pros And Cons Just Like Other Laws

This is despite the fact that it itself has carried out a slew of measures resulting in demographic, structural, legal and administrative changes in Gilgit-Baltistan.

In 1949, through Karachi Agreement, signed between the President of PoK, head of All Jammu & Kashmir Muslim Conference and a Minister without a portfolio of Pakistan, Gilgit-Baltistan was completely ceded to Pakistan, by the then government of the so-called ‘Azad’ Kashmir (PoK). This is how the region was stripped off of all its powers without even consulting the people of the region.

In 1963, common hostility with India brought Pakistan and China together. In settling their boundary differences, Pakistan ceded a 5.800 km of Hunza-Gilgit region known as Shaksgam Valley to China. Though Article states that ‘the two Parties have agreed that after the settlement of the Kashmir dispute between Pakistan and India, the sovereign authority concerned will reopen negotiations with the Government of the People’s Republic of China, on the boundary as described in Article Two of the present Agreement, so as to sign a formal Boundary Treaty to replace the present agreement’, but with Shaksgam Valley making major inroads in the valley, its restoration with Gilgit-Baltistan is not possible.

After the Indo-Pak war of 1971, Pakistan separated Gilgit-Baltistan region from larger Kashmir, renamed it as the ‘Northern Areas’ and placed it under the direct rule of the federal government. 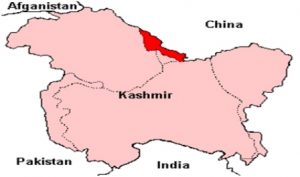 Article 370 of the Indian Constitution gave effect to the State Subject Law, enacted in Jammu & Kashmir in 1927 that refrained other Indians to buy property in the state. The act prevented demographic changes in the state. While India abrogated the provision in 2019; Pakistan, under Zulfikar Ali Bhutto had already abrogated the provision for Gilgit-Baltistan in 1974. This led to an influx of Sunni settlers, especially from the neighbouring Khyber Pakhtunkhwa province of Pakistan, leading to demographic changes and sectarian violence in the Shia majority region.

General Zia ulHuq’s ‘Islamization’ policy and subsequent religious developments in the country, where Sunnis are favoured and Shias persecuted have furthered the sectarian divide in the region.

Also Read : Special Status To States The Game Of Revenues

Though administered by Pakistan since Independence, the region finds no mention in its Constitution. Interestingly, though India claims its sovereignty over it, with 24 seats in Jammu & Kashmir’s Assembly reserved for PoK which included Gilgit-Baltistan; no seats have been reserved for the occupied region in the Indian Parliament.