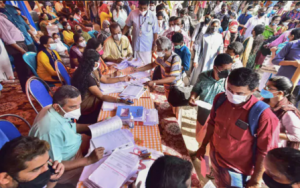 project a victory for incumbent governments of TMC, CPIM, and BJP in West Bengal, Kerala, and Assam respectively. The anti-incumbent DMK alliance is currently in the lead in Tamil Nadu, while All India NRC leads in Puducherry.

In West Bengal, Mamata Banerjee’s Trinamool Congress (TMC) has crossed the halfway mark required to form a majority government. As per the Election Commission of India, TMC leads in 198 seats. However, BJP’s Chief Minister Candidate Suvendhu Adhikari is currently in the lead in the Nandigram constituency. Ms. Banerjee, also contesting from Nandigram, is currently trailing behind. Trends indicate that BJP may win anywhere between 95-105 seats in the WB Assembly Elections.

In Kerala, the CPIM-led LDF is currently in the lead in 88 seats, and the Congress-led UDF is trailing with a lead in 48 seats. While BJP’s CM candidate E. Sreedharan is the leading candidate in the Palakkad constituency, the alliance only leads in 3 seats. The trends also predict a big setback for Congress in Kerala. The three fronts are contesting for a majority of 71 seats in the 140-member legislative assembly.

In the 234-member Tamil Nadu legislative assembly, the anti-incumbent DMK alliance is in the lead in 132 seats. The AIADMK and BJP alliance is leading in 101 seats. However, the BJP is set to retain its bastion in Assam and is currently leading in 60 seats. Paired with its allies, it leads in 83 of the 126 seats. The Congress alliance is trailing with a lead in 43 seats.

In Puducherry, trends showcase a loss for the Congress government and predict a victory for the AIADMK-BJP-NR Congress alliance, which is currently in the lead in 11 of the 30 seats.