There are more than 100 Buddhist sites in Odisha and hence excavations and explorations are far from getting over, and so are bright chances of formation of more such Buddhist circuits. 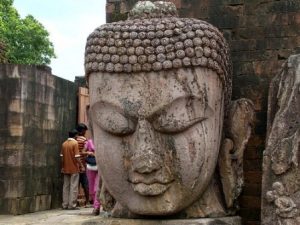 architectural fragments, inscriptions and sculptures signifying an epitome of the rich Buddhist heritage. One of the most promising destinations is the tourist circuit connecting three major Buddhist establishments of Lalitagiri, Udayagiri and Ratnagiri. The potentialities of these sites are adequately attested by unearthing architectural and sculptural antiquities through widespread exploration and excavation. Discovery of monastic sealing have helped identify the names of different monasteries, i.e., Ratnagiri Mahavihara (Ratnagiri) Madhavapura  Mahavihara and Simhaprastha Mahavihara (Udayagiri) and Sri Chandraditya Vihara (Lalitagiri).

Day-long itinerary is enough to cover all three sites, which are situated 85 km north-east of Bhubaneswar via Cuttack and Chandikhol. Although the nearest airport is Bhubaneswar and nearest major railway station is Cuttack, hiring a taxi would be convenient and carrying some food items is advisable. Since the sites are at a distance of 10-20 km from each other, the ideal routing would be Lalitagiri, Udaygiri and Ratnagiri, respectively. Ratnagiri refers to collection of the three hills of Assia range, i.e., Nandapahara, Parabhadi and Olasuni. While the first two hills consists of archaeological remnants, Olasuni is famous for Olasuni Cave Festival and the memorial of saint poet Arakhita Das.

The use of Khondalite in abundance in the architectural and sculptural details could be ascribed to the fact that the Parabhadi hill is composed of Khondalite rock boulders. The craft tradition is still alive at local villages and craftsmen practice stone and brick tradition of construction of religious and secular edifices. It is also said that one of the original manuscripts of Bhubana Pradipa, a canonical prescription of Kalinga temple architecture, was collected from Lalitapur.

Although Odisha marks a prominent place in the Buddhist circuit of India, there are no evidences yet to prove that Gautam Buddha ever visited the state.

The earliest reference is the commentary of the Anguttara –Nikaya mentioning that Buddha handed over the tufts of his hair to two merchants of Ukkala (Utkala, Odisha) named Trapusa and Bhallika who deposited the hair-relic in a chaitya built by them. However,Buddhism, expanded in Odisha with the outreach activities of Ashoka, soon after he fought the KalingaWar in 261 BC.

Buddhism grew to prominence as evident from the writings of Chinese pilgrim Hiuen Tsang who visited Odisha in 639 AD. He mentions “….the majority of the inhabitants of the country were Buddhists. There were nearly one hundred Buddhist monasteries and about ten thousand monks, all of whom were followers of the Mahayana…” It may be noted that in due course these sites became main cradle of Mahayanaform (followers who worshipped Buddha as God) of Buddhism and Ratnagiri became the main centre of Vajrayana, Kalacakrayana, and Sahajayana, offshoots of Mahayana.

Although the significance of archaeological remains of these sites were brought out by some administrative officials since 1869, it was only after the report of Shri MM Chakrabarty published in 1906 that highlighted the Buddhist character of these mounds. First site to be excavated was Ratnagiri in 1958. Full-fledged excavation was taken up in Lalitagiri from 1985 to 991. Excavation at Udayagiri was conducted in two phases, i.e, one from 1985 to 1989 and the other from 1997 to 2003. The excavations have revealed that the period from 7 to 10th century AD is marked with brisk architectural activities at the site under the patronage of the ruling Bhaumakara dynasty.

The most significant finding in the excavation was the relic casket and the apsidal Chaityagriha, first of its kind in Odisha. The base mouldings of the Chaityagriha are reminiscent of the typical early Odishan temple architecture. The Mahastupa at Lalitagiri is about 80 metres in height from the surrounding area and is the largest in dimension among other stupas. In addition to the Chiatyagriha and four monasteries around 80 architectural fragments with some life-size statues of Buddha have been excavated, though no full-fledged architectural part has been recovered. 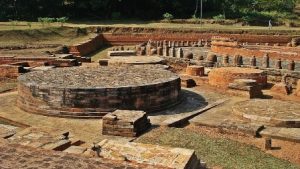 The three caskets found from Mahastupa at Lalitagiri indicate a unique technique of preservation of relics. The outer container is made up of Khondalite in the shape of a votive stupa with steatite, silver and gold boxes, respectively. While one casket has a tiny fragment of bone in gold foil, the other has charred bone without any foil and third is empty. None of these caskets have any inscriptions to indicate the details of the relic, but it is speculated that the relic in gold foil could belong to Lord Buddha. The Site Museum at Lalitagiri has been inaugurated to display, protect and preserve the retrieved antiquities in December 2018.

The highlight at Ratnagiri is the exquisitely carved doorjamb, made in blue-green chlorite schist, giving a colour contrast to the surrounding Khondolite.

The excavation of the monastery at the site could be summed up in the writings of Debala Mitra “..it is undoubtedly a singular monumental edifice”. The Site Museum at Ratnagiri was opened in 1998. At Udayagiri, the rock cut stepped well stands out along with other discoveries.

In terms of diversity of the Buddhist pantheon, Odisha stands unsurpassed in the history of Indian Buddhism. Fifteen forms of Avalokitesvara, 10 forms of Manjusri, 12 forms of Tara and numerous Panca dhyani Buddhas have been found from various sites of Odisha. With more than 700 stupas at Ratnagiri the site can compete with Bodhgaya.

There are more than 100 Buddhist sites in Odisha and hence excavations and explorations are far from getting over, and so are bright chances of formation of more such Buddhist circuits. Dr Jeeban Kumar Patnaik of Archaeological Survey of India, Bhubaneswar Circle, who has been intimately associated with the excavation of Lalitagiri suggests “with the discovery of Langudi site, the popular circuit of Diamond Triangle with Lalitagiri, Ratnagiri and Udayagiri is already changing.”

There are some interesting facts too. During conservation work at the Mahakal temple in Ratnagiri in 1997, it was found that the temple was built over the Buddhist remnants. Hence it was decided to transplant the temple to its current position.  At Udaygiri, Mandala of Buddha with eight Bodhisattvas are found. The Mandala Art emerged to accommodate the proliferation of Buddhist deities within a particular scheme. At Ratnagiri excavation in an area of 80.5 sq meters of the stupa area unearthed 535 complete stupas. Struck by the horrors of the Kalinga War, Ashoka the Ogre (Chandashoka) was converted into Ashoka the Pious (Dharmashoka) and dedicated his life afterwards the spread of Buddhism in and outside India. The total number of antiquities retrieved from excavation is 285 at Ratnagiri during 1985 to 1991. As per locally prevalent oral tradition the proper nouns like Lalita, Udaya and Ratna prefixed to the word giri (hill) refers to these places having palatial buildings for queens of the same name.