Chengdu: The Spicy Capital of China

Immediately after completing my General Fellow tenure in the HNB Garhwal University in March 2009, The 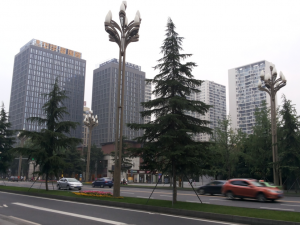 World Academy of Sciences (TWAS), Italy, awarded me a Visiting Scholar position. It was a three months fellowship and I had to work in the Institute of Mountain Hazards and Environment, Chinese Academy of Sciences, Chengdu, China. Chengdu is the capital city of Sichuan Province and is known as the ‘Spicy City of China.’ Because of some other academic assignments in my workplace – Government Post Graduate College, Shivpuri, Madhya Pradesh, I decided to join this fellowship in May 2010.

After getting a Chinese Visa and other travel documents, I left for Chengdu on 23 May 2010. Since there was no direct flight operating between Delhi (nearest airport) and Chengdu, I travelled through a connecting flight from Delhi to Chengdu via Beijing. It was about a five-hour flight from Delhi to Beijing and after four hours of transit at Beijing airport, it was another three hours flight from Beijing to Chengdu. The flight from Delhi to Beijing was available early at 4:00 am. My native place was Shivpuri from where I had to start my journey, first by Bus up to Gwalior and then by train, which reached Delhi by 11:00 pm. Since the flight was early in the morning, therefore, I could not sleep the whole night. Further, the food, which was served in the flight in both sectors, was non-vegetarian so, I could not eat food.

I reached Chengdu at 5:30 pm on the next day, that is, 24 May 2010. A PhD student from the Institute came to pick up me at the Chengdu airport. After travelling 30 minutes by car, we reached the Institute, close to which, a furnished room was booked for me in the International Guest House for three months. I was very hungry, could not eat lunch on the flight as non-vegetarian food was served. We went for dinner immediately after reaching the room. Chengdu food is quite different from other parts of China. It is very spicy and known as Sichuan food. The taste is good. However, the problem for me was non-vegetarian food. Every food was mixed with either pork or beef. I did not find any vegetarian restaurant. The language was another and biggest problem that I faced. The student helped me to communicate with the chefs. I ordered cooked green vegetable curry with rice. No sooner I started eating food, I found very small pieces of meat in the green vegetable curry. I did not understand what type of meat it was. The student informed me that it was pork pieces. So, I did not eat food, bought bananas and peach, and came back to my room.

The next morning, I joined the institute, met with Professor Song Cheng, who was my collaborator. I had to work on the reconstruction of Beichuan County of China after a huge earthquake in 2008. For about a week, it was a difficult time for me mainly for food and language. Being vegetarian, I could not eat sufficient food until I started self-cooking. China is the first largest country in producing fruits and vegetables in the world; therefore, varieties of fresh vegetables and fruits were available. During the early days, I could not speak even for a week because of the language problem. None in my home place and even in the institute was able to speak in English. After a few days, I bought a pressure cooker and other household articles and food items. Slowly, I enjoyed self-cooked food and felt quite comfortable. Later on, I found some Indian restaurants where I often took a meal.

Chengdu (500 m) is one of the beautiful cities of China—cold in winters and humid and hot in summers. It lies in 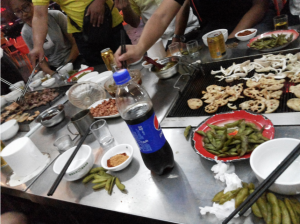 the Sichuan basin with a low altitude in the southwest part of China. A railway trek goes to Lhasa, a Forbidden City of Tibet, and now in China. People are very cordial, humble, and well-behaved. It has a total of 1.63 crore population. A world-famous giant Panda sanctuary is located on the outskirts of the city, which is a tourist hotspot. About a hundred km from Chengdu, a century-old dam project is situated in the Minjiang River basin. Chengdu is a smart city, quite livable, and neat and clean. Multi-storied buildings, parks, green belts, broad and clean roads, sports grounds, and suitable public transport along with others are the amenities, which make life comfortable. The Minjiang River flows through the Chengdu city and makes the cityscape beautiful. I enjoyed the city life, fresh fruits and vegetables. The people of Sichuan province are the follower of Buddhism. In Chengdu, Buddha Temples can be seen in their old part. The Tibetan minority people live in the countryside. The Tibetan has a Hindu connection (because of Lord Buddha), which can be seen in Sichuan spicy food and also their good behave with Hindus, whom they call ‘Indu’. I found the problem in China is from the government side not from its people.

During my stay in Chengdu, I visited Beichuan County for field study. It was affected the most by the 2008 earthquake, where more than 2 lakh people died. I noticed that within two years, China reconstructed the entire Beichuan County. China’s infrastructural facilities are number one in the world. After five days of the field visit, I came back to Chengdu. Other important tourist destinations nearby Chengdu are Maoshan County, Laughing Buddha and Snow Mountain.

It was a three months fellowship. I had a fixed routine work. Morning walk for two km along the road. At 9:00 am, I used to go to the office and then a lunch break for an hour. I worked in the office up to 5:00 pm and then I went for an evening walk. Except for few moments, when I thought of going back to India in mid of the fellowship, I enjoyed my visit to Chengdu. After spending three months in Chengdu, I came back to India. To conclude, my exposure to a different culture broadened my life’s perspective and enriched my overall learning.

(Images by the author)