India does not have a specific refugee or immigration law to deal with mass influx of population from other countries.

he Citizenship Amendment Bill, 2016 was proposed by the Government as a response to the influx of illegal immigrants from neighboring countries into India. The Amendment Bill proposes to provide citizenship based on the immigrant’s religion and the duration of their stay in the country. Since it was first introduced in 2016, the Amendment Bill has met with fierce opposition both from the people of Assam as well as civil society. This is not the first time the Assamese people are uniting against this issue. The Illegal Migrants (Determination by Tribunal) (IMDT) Act, 1983, enacted by the Indira Gandhi government had also faced a similar opposition, though of less intensity. IMDT was an Act, exclusively for Assam, that described the procedures to detect illegal immigrants from Bangladesh and expel them from the state. However, this was later struck down by the Supreme Court in 2005.

The Citizenship Act, 1955 provides for the grounds for granting Indian citizenship – both natural as well as acquired. India does not have a specific refugee or immigration law to deal with mass influx of population from other countries. Hence the Citizenship Act is used to adjudicate all requests for citizenship, including the refugees and immigrants fleeing from political crises in their home countries.

The most prominent influx of immigrants into Indian territory, has been into Assam from the neighbouring Bangladesh. There has been a steady flow of Bangladeshis entering and settling in Assam without proper documentation since the 1960s. This hit a peak during the 1971 crisis in East Pakistan. The local Assamese population protested the heavy presence of foreign nationals in the state and felt that it threatened their socio-cultural and economic security. In 1985, the Rajiv Gandhi government and the Assam movement signed the Assam Accord, as a Memorandum of Settlement (MoS). The accord segregated the migrants into three categories: all those foreigners who had entered Assam between 1951 and 1961 were to be given full citizenship, including the right to vote. Those who had come after 1971 were to be deported. The entrants between 1966 and 1971 were to be denied voting rights for ten years, but would enjoy all other rights of citizenship. In effect, March 1971 was recognised as a cut-off date for granting immigrants citizenship. These provisions were inserted as Section 6A in the Citizenship Act. Additionally, the Act made it a mandatory eligibility requirement for the applicant to have resided in India for the previous 12 months and for 11 of the 14 previous years.

“The Citizenship (Amendment) Bill, 2016 on one hand aims to divide the Assamese and Bengali speakers of Assam and on the other hand erode the secular ethos of India by initiating granting of citizenship on the basis of religion. This will further weaken the social fabric of Assamese society.” Pravin Sultana, Assistant Professor, P B College, Guwahati University

The proposed Amendment Bill has faced vehement opposition from the people of Assam mainly because they perceive it as a violation of the Assam Accord. The Amendment Bill seeks to reduce the minimum duration of stay to be eligible for the citizenship of  India from eleven years to six years for the people from six minority communities – Hindus, Sikhs, Buddhists, Jains, Parsis and Christians – from three countries – Pakistan, Bangladesh, and Afghanistan. In recent years, there has been a resurgence in an anti-immigrant sentiment in Assam, as the number of immigrants has been on the rise. The local Assamese population fears a cultural invasion and point to the increase in Muslim population as evidence. 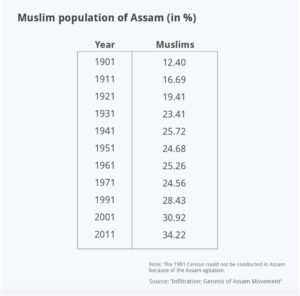 Apart from these concerns, civil societies too have voiced their concerns about the undemocratic nature of the Amendment Bill. To begin with, the Bill proposes to consider granting citizenship to religious minorities from the three Islamic countries in South Asia – Pakistan, Bangladesh, and Afghanistan. According to the Bill, religious minorities eligible for the Indian citizenship after staying for six years in India would include Hindus, Sikhs, Buddhists, Jains, Parsis and Christians. Notable is the absence of Muslims from this list. This violates the Article 14 of the Indian Constitution (Right to Equality) – which is applicable to all persons, citizens and foreigners.

A Joint Parliamentary Committee (JPC) on Citizenship Amendment Bill was on a tour in Assam. It had a dialogue with the various organisations that were against the Bill and will submit its report soon.

“The NRC (National Register of Citizens) process is on, final rolls will be released in a few weeks. This has been an extremely tedious, sensitive, difficult and challenging process, facing Assam, which is dividing it right down the middle. There should be efforts made to ensure that nothing causes greater anger, bitterness and harm to people. There is a need to stand by law, the treaties accepted in Parliament and, extremely importantly, to uphold the rights of people, and not violate them. I think that the JPC, should consider, in light of reactions within Assam, to make an exception to the Citizenship Amendment Bill for Assam state. That is not to allow the amendments of the Bill to be applicable here. The reverse of what happened with the Illegal Migrants (Determination by Tribunals) Act of 1983, which was applicable only to Assam, and no other part of the country.” Sanjoy Hazarika, Director, Commonwealth Human Rights Initiative

The Bill appears to be a strategic tool to maintain the Hindu voter base of Assam (and the country) for the BJP government. The BJP and its supporters attribute the rise of Muslim population (34.2 per cent of the population of Assam by the 2011 Census) to the influx of Bangladeshi immigrants into the state. To curb this and to increase their vote bank, the Modi government has been keen on passing the Citizenship Amendment Bill. This will increase the population of other religious communities in Assam and will act as their vote bank.The Assamese people fear that this will dilute the indigenous culture of Assam and will eventually lead to a loss of identity of the Assamese.

The writer is a masters student at Ambedkar University, Delhi. She can be reached on twitter
@Vasundhara3001

The Moment When It Came