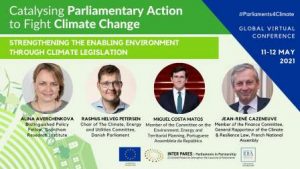 looking at legislatures with an environmental lens. In the last decade, especially after the signing of The Paris Agreement on Climate Change in 2015, environmental concerns have become a major sector of concern for the executive. However, as countries like the UK, Germany and Denmark have shown, it is also as important to include the conversation on climate crisis into our constitution, especially to sustain the focus on climate action.

A two-day webinar organised by the Brussels-based Inter Pares, European Union’s global project to strengthen the capacity of parliaments, discussed the correlation between parliamentary democracy and climate crisis, and how its coherence can be used to pave a path for climate action. Panelists, which featured experts and Members of Parliament from Germany, France, England, Denmark, among others, discussed the methods to strengthen parliaments in partner countries by enhancing their legislative oversight, representative and budgetary functions.

Battling the climate crisis is as essential for human survival as it is for the survival of parliamentary democracy. Climate change visibly affects governance through its impact on food security, migration flows, water scarcity, and the financial impact of extreme weather events. It also deepens inequalities, increases violence, and adds to economic debt. “Currently, democracies comprise over half the emissions of greenhouse gases globally. Fifteen democracies are among the top CO2 emitters. The ability of democracy to deal with climate change will become a test case for it to deal with catastrophic reasons of human decline,” Kevin Casas-Zamora, Secretary-General, International IDEA said.  He expressed concern over countries like China that are trying to shift the narrative by presenting a vertical, centralised system of governance as more adept at dealing with the climate crisis.

“Democracy, hence, has to prove itself as the best antidote to climate disruption, as it has done so in the past. It is no surprise that Greta Thunberg’s movement originated out of a country like Sweden,” he added.

However, democracies, on average, have performed better when it comes to honoring national agreements on the environment. The Climate Change Performance Index 2020, which measures climate protection performance by 57 countries in the EU accounting for over 90 per cent of global greenhouse gas emissions, lists 9 democracies in its top 10. China stands at 27.

Climate change can be presumed as a democracy’s biggest opportunity and its biggest challenge. Harnessing the power of democracy can permit a state to take the leap of transition required to maintain a sustainable world. In this effort, parliaments are crucial, seeing as they are the link between citizens and the state.

A key aspect discussed on the panel was the necessity of legislation for climate change. We cannot leave it to governments to sign international agreements and put policies in place to reduce carbon emissions, Alina Averchenkova of the Grantham Research Institute opined, and presented the UK Climate Change Act as a model. The Act was passed by the British Parliament in 2008, and, research shows, has reduced carbon emissions in the country by 40 per cent since 1990 while increasing the GDP by 80 per cent. “The Act allowed the separation of greenhouse gas emission from economic growth, and has influenced the politics of climate change in the country,” she said. Even with five elections and three political crises, the conversation on climate change in the UK has only strengthened, and Averchenkova gave the credit to the Act.

“Climate-change laws allow you to protect climate action against future political change and political backsliding. A well-framed climate law can be a good vehicle for raising the national ambition of climate change, delivering international commitments, and galvanising action. The role of parliament is crucial,” she added.

The panel also featured Baroness Hayman, a member of the House of Lords, British Parliament, who said that a strong climate act has helped the UK in building a system of accountability. “The Act sets up an independent climate change committee which reports regularly to the parliament. It advises the government, but cannot compel them to act,” she said. Hayman is the founded of Peers of the Planet, a cross-party group in HOL, which “is committed to the idea that the need for action on climate change is urgent, and realize that we need to speed up action to prevent biodiversity loss.”

The group has also helped increase environmental literacy among its peers in the House of Lords, which has led to a rise in environment-related questions in the British Parliament. “We look at acts with a climate lens now,” Hayman added.

A similar 2013 legislation in Denmark has helped the country to a point where it only contributes to 0.01 per cent of carbon emissions in Europe today.  “An upgraded version of the Act was passed last year, which sets medium-term target to reduce greenhouse gas emissions by 70 per cent, and aims for Denmark to become climate-neutral by 2050. The Danish Parliament has established legally binding targets to reduce the emissions,” Rasmus Helveg Petersen, Chair of the Climate, Energy and Utilities Committee, Danish Parliament said.  Helena Marshall of Fridays with Future said that protests outside the parliament in Germany are what led to a significant impact on their environmental legislation.

“Climate crisis can only be solved in the parliament,” she added.

While exploring the roles of Parliaments in developing approaches to environmental budgeting, panelists stressed on the importance of budgetary oversight over the climate change issue, which is also an economic and developmental issue.

Governance of climate related public finance does not happen in a vacuum, and such formal systems are most effective when embedded within robust accountability ecosystems in which state and non state actors, civil society, media, academia, and technical experts engage in public finance planning, policy making, execution, and oversight processes to ensure that public money budgeted for climate action is being spent effectively.

“In addition to having access to timely and comprehensive detail to climate related budget information at all points in the budget process, parliamentarians also need access about climate impacts and potential solutions and the contexts in which those policies and programs will be implemented. Internal research and analytical capacity through legislative offices/research that can provide expertise on policy options can be valuable resources for parliamentarians,” McCullough said.

“This becomes even more important where the parliament has to approve the budget and can eventually see weather climate change is included. Secondly, once the budget has been approved, then MPs can analyse the information being churned out of the climate budget, expenditure that is being done on climate change,” he added. UNDP’s work with parliaments in Sweden, Nepal and Pakistan has shown that speakers and presidents of the assembly have an important role to play, as do standing committees and special cohorts created to discuss environmental issues.

“Guidance notes and capacity development sessions should focus on targeted questions to the executive so that they exude a clear response. Researchers and think tanks must be contacted and their work must be used. It is also imperative that both majority and opposition parties work in coherence, because an issue like climate change needs consensus from both sides to drive a solution,” Maken added.

Swarms of Mosquitoes have been Released in Florida, the US and It is a Good Thing