COVID-19 and Blurred Boundaries of Women’s Work in Wuhan

The police in many parts of China have been reluctant to help the survivors, especially during the pandemic. Hence, how do the Chinese government make the policies gender-sensitive in nature will be something to be watched at in the immediate future.

The impact of coronavirus pandemic on women’s lives in Wuhan, China, is yet to be revealed in its substantial details. From the available news reportage, it emerges that 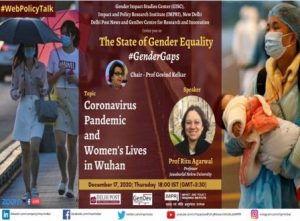 women have shouldered far greater professional responsibilities. However, at the same time they experienced severe vulnerabilities as well. In Wuhan, the epicentre of the outbreak, women were working in all conceivable frontlines of the battle against the contagion as doctors and nurses. With the surge in cases and increasing demand for healthcare, the nurses find themselves in a difficult situation as this was highly contagious and their working hours in the hospital increased daily as reported by Wang Lin, correspondent, China Youth Daily, on 26 February 2020. Their life was limited to the walls of hospitals with protective suits and masks on. Their clothing was complemented with adult diapers and protective googles which left the lingering imprints around their eyes. The twin burden of managing the households and in many cases caring for small children and elderly parents has blurred the boundaries of women’s work. It is evident that regardless of the nature of work, women contributed significantly with their labour, professional skills, voluntary actions, and selfless dedication. Still the caretakers were abused in the city.

Universally, care work is a feminine duty, and the case is same for China where great majority of medical staff in its hospitals are women. The demand for these women’s services increased with the outbreak of COVID-19and they were compelled to leave their families behind to be able to work long shifts in the hospitals. It has been reported that more than 200 central hospital employees were infected, including the vice presidents and the director of nursing. The heads of multiple departments were on life support. The entire orthopedics department had been wiped out and oncology had lost almost 20 doctors and nurses.

As reported in China Labour Bulletin on March 2020 Guo Qin and her colleagues were exposed to the virus through their work, while collecting blood and sputum samples. Even after recovery, they had to return to the hospital due to the shortage of nursing staff. Nursing assistants, many of whom are middle-aged rural migrants, are even more at risk than doctors and registered nurses. Another nursing assistant, Chen Cuilan who had been employed at Wuhan Central Hospital for many years, told Caixin, the Chinese newspaper correspondent, that as soon as she was confirmed with COVID-19 she was forced to leave the ward. Initially, they were almost on the streets as Wuhan did not have much quarantine facilities and had to wait for their turn in quarantine centres. But they feared their safety after recovery as they have duty to attend in hospitals again exposing them to virus. Another nurse, Liu Lu, was part of the female medical workers who were dispatched to Hubei narrates that the nurses decided to cut their hair short to join duty in the airtight protective gowns as narrated by Xinhua News Agency, China. A journalist from Wuhan, Liu Lutian, narrates, 24 old nurse Ye Qi who worked more than a month without resting.

As community workers, women voluntary took charge of daily check -ups of the temperature of the residents, taking care of old age parents staying alone, delivering groceries and vegetables to the households and regular monitoring.

When under strict lockdown, people of Wuhan convulsed into a collective despair as growing number of people needed immediate daily life support, women provided valuable help to the needy.

Also Read : COVID-19 and Toilet-use in India: Why Continued Attention is Needed?

Xujia- Caiguan Jia is illustrative of women’s involvement in community work. In Xujia Peng street, Wuchang District, Wuhan, lived more than 4000 elderly residents who were technologically unaware of using mobile apps. They were supported by women workers who came forward to help these elderly residents. One of the women volunteers Xujia had emerged as Caiguan jia who made available all essential commodities and vegetables at much cheaper prices than the market and also ensured the food safety standards. 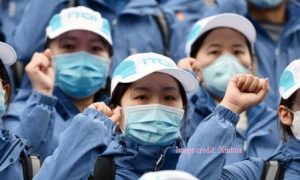 Another women volunteer was Huang Ping, a teacher lived in a community close to Tongji hospital, through the school work certificate, found supermarkets group purchase, contact them for the community distributionin that area. Some of the women voluntary activism focused on awareness campaigns. Ding Cao Li came to the limelight for her committed activism in the field epidemic prevention. Ding was the secretary of Xinwuli community. Hanyang District- level Women’s Federation office printed a story about Ding Liwho carried out a tireless campaign against epidemic by focusing on how to prevent its spread in the local community. Ding used a variety of methods of epidemic prevention which includes “strict quarantine”, “strong protection”, “publicity”, “livelihood protection”, “detailed investigation”, “strict isolation” and “solid support” to make people more aware as well as be vigilant about the contagion.

Wuhan’s women sanitation workers also struggled to keep the city’s streets clean with increased workloads. In addition to their usual cleaning services, sanitation workers have to empty mask recycling bins, sterilise their vehicles three times a day and spray disinfectant onto the streets. Ms Lian, who is in her mid-60s, is paid 70 yuan a day, but explained that she will be fined double of the amount if she is absent even for a single day as told to correspondent of China Labour Bulletin. In addition, the lack of public transportation madethese workers to reach their workplace in time more difficult. Another sanitation worker, Ms Wu, said she had to walk for more than an hour to reach her cleaning station.

Women as Caterers and Taxi Drivers

A group of dedicated caterers and delivery drivers like 32-year-old Chen Jinghad worked round the clock to provide free meals to medical staff in Wuhan. They had to make extra shifts to cook almost thousand meals a day and deliver to the medical staff in five city hospitals in Wuhan by putting themselves at risk of contracting the disease in the process.

Chen had planned to return to her hometown in Shaanxi for the Lunar New Year holiday, but like millions of others, she was trapped when the city was quarantined on 23 January.She said “I cannot return home as I have to prepare meals for Wuhan doctors”.She worked for food delivery company Meituanand organised an efficient and hygienic delivery system that was able to provide medical workers with much needed meals.

The efforts of Chen and her colleagues are testimonies to the fact that the coronavirus outbreak has not only affected the city’s frontline medical staff, but has also placed extraordinary demands on Wuhan’s delivery workers, taxi drivers, sanitation and community workers.

Industries dominated by women have been hit hard by the outbreak. According to statistics, the employment rate of Chinese women was nearly 70 percent, mainly in agriculture, hotel and catering, as well as wholesale and retail industries. Unfortunately, hotel and catering, farming and livestock and other women employment industries have been severely affected by the epidemic. The Ministry of Human Resources and Social Security has released a list of the 100 “most underemployed” jobs in China in the third quarter of 2020. Among them, sales staff, cleaners, restaurant waiters, security guards, merchandise workers, housekeeping attendants, customer service personnel, real estate brokers, delivery workers, car workers and other occupations are in the top 10 “most underemployed” occupations. Needless to say,in majority of these occupations, women are employed in large number.

COVID-19 and Cases of Domestic Violence

There has been increased domestic violence in China pertaining to the lockdown amid COVID-19.There were instances of physical abuse by their husbands and women were almost kicked out of their house. The police station in Jianli County, Jingzhou City in Hubei Province had received 162 reports of domestic violence in February this year — three times more than the 47 reported during the same month the previous year. The number of cases reported in January 2020 had also doubled compared with the same period last year. In some cases, the economic conditions of the households seem to put a strain and causing violence against women. Most often women find themselves completely at the receiving end of their husbands who hold better employment thus forcing women not reporting the case at all to the authorities. The police in many parts of China have been reluctant to help the survivors, especially during the pandemic. Hence, how do the Chinese government make the policies gender-sensitive in nature will be something to be watched at in the immediate future?

(Note: This article is based on excerpts from the webinar on “Coronavirus Pandemic and Women’s Lives in Wuhan”organised by Gender Impact Studies Center at Impact and Policy Research Institute (IMPRI) and the Delhi Post.)

ASHA Workers and Their Unrecognised Service during the Pandemic