ASHA Workers and Their Unrecognised Service during the Pandemic

In the times of the pandemic, where the ASHA workers are spending hours of physical labour, while being at risk of contracting the virus, they are paid nominal wages in the name of honorarium, inequivalent to the work done by them.

ASHA, the acronym for Accredited Social Health Activists, is a cluster of village-level community health workers, who are primarily employed under the National Rural Health Mission, 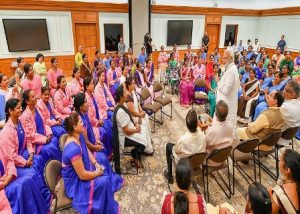 which is an initiative of the Government of India. The day to day activities of the ASHA workers consist of treating patients with preliminary illness, facilitating patients to healthcare centres, acting as midwives for institutional delivery, providing counselling services, and creating awareness about the health services. The COVID-19 pandemic has rendered the ASHA workers at the forefront of the crisis due to the various tasks, such as door-to-door examination of COVID patients and monitoring those placed under quarantine, screening patients at isolation centres and documentation of information of patients.

Wage Disparity in the Services Rendered

Despite carrying out such important functions, the amount of wage provided to the ASHA workers is based on a “performance-based incentive model” for their routine activities, ranging from Rs 1000 to Rs 2000 per month, with an additional sum of Rs. 1000 being paid to them for the services carried out during the pandemic. However, this sum is not uniform across the country, as it purely depends on the discretion of the state governments to grant the stipulated amount of money. For instance, in Delhi, the average wage payment to an ASHA worker during the pandemic is around Rs 4000, while this amount is considerably lesser in other metropolitan cities and rural areas. The demands of the association of ASHA workers in Delhi for payment of a minimum of Rs 10,000 for the services rendered have been unheard. In addition to the nominal amount granted to these workers, the sanctioned amounts often fail to reach these workers due to logistical failure on the part of the government, including the lack of allocation of funds in their names.

According to a survey undertaken by Oxfam India, approximately 64 per centof the ASHA workers have not received the incentive promised by the government.

Lack of Adequate Safeguards to the Frontline Workers

The ASHA workers have been classified as ‘low-risk’ for the use of Personal Protective Equipment (PPE kits) by the Ministry of Health and Family Welfare, and are provided only with triple layer masks and gloves. This has forced most of the ASHA workers to depend on saree’s and veils as masks due to lack of equipment. Although the central government has announced an insurance scheme of Rs. 50 Lakh for health workers in cases of death due to coronavirus, it fails to cover the hospital treatment charges and use of quarantine facilities, which are generally expensive to afford. The central government announced the Pradhan Mantri Garib Kalyan Package Insurance scheme for the health workers fighting COVID-19, most of the direct beneficiaries, i.e., the ASHA workers are not aware of the same and only a handful of them have availed the benefits under the scheme. Furthermore, the absence of precise data on the number of deaths of the healthcare workers, including the ASHA’s, highlights the precarious situation of such workers and the position of their families. The central government has given a hazy account of the workers’ death toll by shifting the responsibility on the state governments to maintain data of such deaths by virtue of health being a subject on the state list.

Other Challenges and Issues

ASHA workers who have been quarantined while on duty are often met with hostile attitudes upon returning to their homes. The stigma that is attached to those who recover or have spent time in a quarantine facility after being infected by the virus hinders them from leading a normal life and accessing their day-to-day needs. The absence of fixed hours of work due to the serious and immediate nature of services rendered has compelled them to work for 12 hours per day, with the governments refusing to take such factors into account while determining their wages. The problems faced by health workers do not end here as the women’s workforce is subject to sexual harassment and assaults while providing service, which often goes unheard despite the Vishaka guidelines and the enactment of the Prevention of Sexual Harassment Act, 2011.

ASHA Workers under the Labour Laws

The directive principles enshrined in the constitution, under Article 39(a), provide that the state shall make policies for adequate means of livelihood to men and women and obligates the state to ensure health and strength of workers, and prevent their abuse. Furthermore, Article 42 makes provision for securing just and humane conditions of work and maternity relief for women. The approach of the higher judiciary has often been unfavourable to the cause of voluntary workers. In the case of State of Karnataka & Ors vs Ameerbi & Ors, the Supreme Court held that Anganwadi workers (similar to the ASHA workers) employed under the Integrated Child Development Scheme (ICDS) would not be considered ‘workmen’ as the ‘scheme’ cannot be considered as an ‘industry’ to entail the benefits of minimum wages under the Minimum Wages Act, 1948.

The 46th Indian Labour Conference discussed the status of ASHA’s and recommended that the Unorganised Workers Social Security Act, 2008, should be applicable to them.

However, the definition of ‘unorganised sector’ under the 2008 Act is limited to enterprises owned by individuals or self-employed workers engaged in the production or sale of goods and services, where the number of such workers is less than ten. This definition proscribes the inclusion of ASHA workers within its purview. The extent of application of the Maternity Benefits Act, 1961, is limited to workers in factories, mines, plantations and other government establishments. ASHA workers do not fall into the scope of such establishments as they are chosen by the government, which renders them ineligible to avail the benefits under this act.The Code On Wages 2019, which is the most recent labour legislation introduced by the parliament of India that replaces four major wage legislations, including the Minimum Wages Act,1948, has failed to consider the voluntary nature of employment, thereby refusing minimum wages to them. The wages provided to the ASHA workers are lower than the minimum wages paid to unskilled labourers under the Act.

The appalling conditions of work of the ASHA workers often go unnoticed despite constant demands by ASHA workers’ trade unions. In the times of the pandemic, where the ASHA workers are spending hours of physical labour, while being at risk of contracting the virus, they are paid nominal wages in the name of honorarium, in equivalent to the work done by them. Moreover, they are denied from availing minimum social security benefits under the various labour legislations in India.

The writer, a public policy researcher, is pursuing law at School of Law, Christ University, Bengaluru.

COVID-19 and Blurred Boundaries of Women’s Work in Wuhan