The plights of migrant workers have not been heard in the South American regions when the COVID-19 crisis loomed in the horizon. While for the West Africa, the Ebola 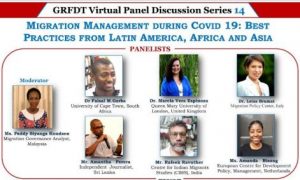 epidemic was just ending and people were back to normal. A crisis within the crisis is the phrase that most suitably described the regional discourse amidst the pandemic. A strategic regional cooperation to combat the pandemic to deal with the socio-economic aspect of migration for the survival has been in consideration. Experts at the 14th GRFDT Virtual Panel on “Migration Management during COVID-19: Best Practices from Latin America, Africa and Asia” vetted the issue of migration management.

The panel discussion was moderated by Ms. Paddy Siyanga Kaudsen, who pointed out the fact of isolation of the events happening in South America and Africa region. The panellists broadly discussed and elaborated the events that had already taken place and the responses that are seen. Dr Marcia Vera Espinoza, Professor in Human Geography, Queen Mary University in London, gave the insightful note on the ongoing research project on the COVID-19 effect. A comparative analysis was being put forward by the professor that is being carried out in Colombia, Peru, Brazil, Ecuador, Chile, Mexico and Uruguay. While Dr Leza Brumat, an international relations analyst and research fellow at the migration policies centre, European University Institute of the Florence, Italy, explicitly dealt with the South American crisis, where the intra-regional migration is more prominent.

The complexities of the crisis already felt by people in the South American region due to socio-economic aspect created an urgency resulting in forced migration. The phenomenon of returnee migration was seen characterised by mass returns on foot. Already vulnerable migrants have to take these drastic measures for survival. As the panellist highlighted, the migration was characterised by the bottom up action. In addition to this, the Latin America regions also witnessed the involuntary and forced migration due to measures taken at the border point. Bolivians and Peruvians in Chile were the first groups of nationalities that stated moving back to the country, but were unable to reach home after strong border measures. This resulted in the new risk as most people congregated to the same place and fear of spreading the virus engulfs the communities. Similarly, some migrant’s protection protocol like “Remaining Mexico Program” that enables the US to send non-Mexican people seeking asylum back to Mexico did not fare well. The people have to wait for immigration procedure and were trapped in the border cities in Mexico. A new form of measure was taken in countries like Chile, Peru and Uruguay in the form of digitalisation of migration procedure. As highlighted by the Dr Marcia, the digitalisation did not decrease the waiting time for the people awaiting the documentation.

Furthermore, the lack of digital literacy and people not having accessed the internet data created a digital divide and did not accomplished the needed change as thought by the government agencies.

While as the initial field report from Dr Marcia suggests, the situation worsen in terms of asylum workers as Latin American policy required a face to face meeting. As a result of the pandemic, the processes of the visa were not carried out and the migrants were left in a limbo. One of the findings that the Prof Marcia rightly pointed out is the fact that more borders restriction doesn’t stop migration, but increases migrant irregularities.

The phenomenon of influx and out flux in huge numbers was tackled on policy levels which were devised to suit the gravity of the situations as highlighted by Dr Leza Brumat. Her intake into the three levels of policy making bodies provides the pathway on the functionality of the administrative bodies. On the regional level, South American countries are creating a common fund for research. The daily exchanges of information between health ministries were cited by the her. In addition, custom tariffs were reduced on the equipment that correlates with health sector and measures were implemented to guarantee free movement of goods and services. The bilateral coordination in the region are of utmost importance in the face of pandemic. In the national front different measures were taken to tackle the situation. As stated in the presentation, Argentina and Uruguay have adopted ‘Privilege the society’, i.e., national policies focused on the survival of the society rather than economy. The countries such as Peru, Paraguay and Ecuador have adopted the concept of society as well.  In a contrasting way, Brazil opted for ‘Privilege the economy’ policies. As Dr Leza pointed out, some mixed module also has been seen in countries such as Chile and Columbia while some accounts of militarisation of immobility has been witnessed in Bolivia, Ecuador and Peru. Some state mechanisms were more in control in the local level, as Colombian municipalities enforced the local lockdown that featured the notion of ‘Stay in your neighbourhood’ as ‘Staying in your home’ is not possible.

Nationalism, Refugees and Practices: A Case of Africa

In the African context, Dr Faisal M. Garba, Lecturer, Department of Sociology, University of Cape Town, South Arica, shared about the differential methods of restrictions followed among states. However, he also pointed out the fearful account of Ghana that initially advocated adopting a nationalistic posture in dealing with the COVId-19. He raised a fundamental question: Who belongs? As his observational accounts that he laid in the discussion one of the features of Africa is its aspect of migration as a way of living. People identities are tied with it. Some demarcation has been drawn. However, Dr Garba also rightly pointed to the positive notion of solidarity that has been practiced in the different facets of society in the grassroots level. This has led to the nationalistic behaviour from the state to not foster in the society.

In terms of refugee camps, the Kenya government and UNHCR are collaborating to setup facilities. The refugee-led working group had produced close to 20000 face masks. As observed by the Dr Garba, the active involvement of the refugees shows the heterogeneous nature of society. While in the case of Morocco, UNHCR local agencies and state administration focused and facilitated for the online education to be provided to the refugee children.

The practices from the local administration in dealing with the pandemic have been good as per the assessment from Ms Amanda Bisong, Policy Officer, European Center for Development Policy Management (ECDPM), the Netherlands. West African region’s experiences with the Ebola epidemic have prepared the countries in the region for coordinated response and setup health organisation. As stated by the Amanda, guidelines were able to be adopted in quick time. The organisations were also able to get the services from one state to another in quick time. For a country like Liberia and Sierra Lione that have lost much of the workforce due to Ebola were also able to move essential health workers during the pandemic. The combine feature of public health approach to the economic approach is being seen in the West Africa region. A phrase that have characterised most of West Africa while handling pandemic was cited by Saliou Dione, an expertise in the discussion, i.e., ‘self-down’ but not ‘lock down’.

A parallel was drawn on the impact of COVID-19 in the regional behaviour and how media played the role in handling the crisis.

A major role of media in dissemination of information to the general public shapes the mindset of the population as highlighted by Amantha Perara.

A journalist by profession and researcher in the online trauma threat faced by journalist, he cited the events circulating the national election in Sri Lanka. During the election period, the migrant workers were perceived as heroes that have come back to that country, while in the situation of pandemic the media are portraying as if they are not welcomed. Amantha also rightly points out that the important issue in relation to migrant workers are missing out such as the remittance flow, vulnerability of returning migrants, especially women, from the media coverage. Further, media are targeting sub-story with no substance and are distracting people to take over discussion over major issues. This has led to the wrong perception of the impact of the returning migrants that will have affect in the overall country development.

Migration, as a basic necessity for the subsistence of life in the region, has called for strategic policy that looks after the mobility. COVID-19 has functioned as an equaliser in society. The nationalistic and nation-state phenomenon can be witnessed at the state level, but the solidarity in the grassroots level as well as the initiation from the migrant-led organisation has called for peace and unity. Media literacy as well as digital literacy is of utmost importance to fight the pandemic and change the perception on returning migrants. Many NGOs and migrant-related international organisations have to quickly readapt and redraw the plans to confront the crisis. However, the panellists have pondered over the role of international organisation and called for a sense of emergency response to tackle the ongoing problem. Irregular migration has worsened after the pandemic and this is the fear in the coming months as pointed out in the discussion. The challenges to the states are over the high rate of job insecurity over the crowded population in the face of limited access to health facility. A gap has been evident in between the migrants and national population. Similar events have drawn parallels to South Asian region, most notably India, where the question over the federal structure has been raised. However, a noteworthy initiation has been taken by the European Union that has called for migrants in the migration committee to better assess the situation at hand. Cooperation, solidarity and inclusive migration policies are required for managing migration.

The writer is currently pursuing Master’s Programme in Conflict, Peace and Development Studies, Tribhuvan University, Nepal. He can be reached on twitter @pratik_satyal.