If COVID-19 has taught us anything, there are two important lessons; quick and decisive action saves lives, and international cooperation is the key.

COVID-19 has created an unprecedented situation across the globe. As the number of cases continues 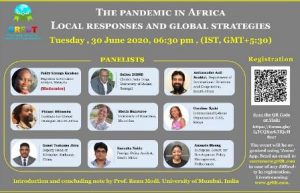 In a recent webinar organised by the Global Research Forum on Diaspora and Transnationalism (GRFDT) titled “The Pandemic in Africa: Local and Global Strategies” on 30 June 2020, the galaxy of international panellists examined the responses of the African countries and the effects the virus has had on the continent, especially in the context of migrants. Out of all the regions in the world, Africa has been the least affected by the pandemic. As of 2 July, there were 418,211 positive cases of COVID-19 and 10,406 had succumbed to the virus. Out of the 54 countries in the African Continent, five account for 64 percent of the total cases, which include South Africa (159,333), Egypt (69,814), Ghana (18,134), Cameroon (12,592) and Morocco (12,636) (Africa News, 2020). These numbers are significantly lower than their European and American counterparts.

For a continent that has been ravished by famine, plague, and violence, Africa has managed to flatten the curve of COVID-19. While there are multiple factors that can help explain the relatively slow transmission of the disease in Africa, the major factor was the quick, decisive, and strict responses to the virus. Due to their experience with plagues, Africa has experience handling these pandemics. Multiple countries, including Ethiopia, implemented strict lockdowns before a case was even confirmed in their countries. Ethiopia, as well as other countries, made preventive measures, performed surveillance, and conducted health monitoring on those arriving in their countries. While it is inevitable that the virus will continue to spread due to being highly contagious, the responses and quick action of multiple African governments have slowed the transmission of the virus.

The United States and European countries have felt the effect of the virus both economically and health wise. Whole economies were brought to a screeching halt, as societies sheltered in place to slow the progression of the virus. Hospitals became overwhelmed with the virus, as it is highly contagious and caused thousands of people to require medical attention at the same time. However, as mentioned previously with the relatively low number of cases, Africa has managed to soften the effects of the virus.

COVID-19 has not led to a health crisis in Africa, but they have still felt the economic effects of the virus.

The economic effects of the virus in Africa were significant. When lockdowns were implemented, economies 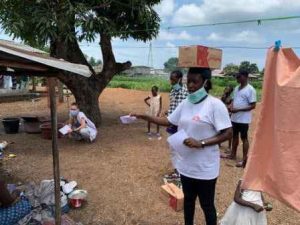 stopped as only essential businesses were open. This posed a problem for multiple countries in Africa, as a large majority of the workforce, including migrants, in Africa is employed through the informal sector. While a large part of the formal sector remained open during the virus, the informal sector stopped affecting the livelihoods of millions of people. However, thanks to the virus, multiple African countries have taken the steps towards formalising the informal economy, in an effort to protect from further economic crises.

While economically Africa has suffered the effects of COVID, they have yet to feel the health effects. Africa has a rather young population, average age of 19, which has kept the death toll significantly lower than their American and European counterparts. However, while they have not faced a major health crisis yet, thanks in large part to their quick response, Africa would have a hard time handling the health crisis, if it were to occur. Africa does not have the healthcare capacity to deal with the pandemic. The large majority of the healthcare sector is located in urban areas, with limited resources and personnel in rural areas. The African healthcare system has seen major cuts in funding over the past few decades. Multiple countries are facing a shortage of ventilators, often having only a handful (3 or 5) for a whole population. With limited supplies, personnel, and funding, Africa would not be able to withstand a major health crisis without the help of the international community.

COVID-19 affected millions of people, including migrants, whose vulnerability increased drastically. Unlike citizens, migrants often do not enjoy the same benefits or protections offered by host governments. As the pandemic ravished economies worldwide, migrants were left stranded and without jobs in foreign countries. A large majority of African countries depend on the remittances of migrants and diaspora, but with COVID the ability for migrants to send remittances home drastically decreased.

The migrants were left with the choice to stay in the host country without work or return home.

A lot of migrants returned to their home countries, but some migrants were stranded in foreign countries or unwilling to return. As countries responded to the economic crisis caused by the virus, most countries focused on their own citizenry before foreigners. However, many African countries, such as South Africa, looked to add migrants as beneficiaries for the economic relief packages. Countries, such as Ethiopia and Senegal, engaged and supported their diaspora abroad, in an effort to protect the vulnerable populations. However, some migrants were stranded in their host countries, as they were unable to return home. This led to countries and host embassies working together to bring stranded migrants’ home. In the case of Ethiopia, the government worked with the Lebanese government, NGOs, and various other partners to bring over 15,300 people back to Ethiopia.

If COVID-19 has taught us anything, there are two important lessons; quick and decisive action saves lives and international cooperation is the key. COVID-19 has brought life as we know it to a halt. However, through quick and decisive action, Africa has managed to lessen the impact of the virus on the continent. Africa has led by example, both in terms of the actions taken and the inclusivity of their economic relief/rebuilding plans, ultimately softening the blow of COVID-19.

The writer, a policy researcher, is a recent graduate in International Migration with Human Rights Law from the Brussels School of International Studies. She can be reached @paigefabry44

Religion is Not Found in Crowd