Immediate steps are needed to ensure that pandemic does not reverse the gender equality progress achieved by India over several decades in many fronts, particularly to reduce the unpaid domestic and care work.

Over the years, the status of Indian women has been subjected to many changes. In Vedic times women enjoyed a fair amount of personal freedom. Each family was a single economic unit 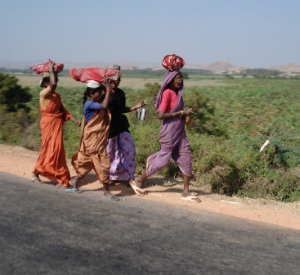 without any specialization or gender based division of labour. Both men and women could participate equally in all the political, economic and religious affairs, which were very simple in terms of organization and functioning.  This perhaps explains the comparatively better situation of women in the vedic period in terms of access to education, religious rights, freedom of movements etc.However women’s status had worsened in medieval period and they were politically, socially, and economically inactive except for those engaged in farming and weaving. The social movement of women was restricted and most of them were made to believe that their ideal place was at home. Men being providers, women became dependent on them economically for their subsistence except for the poor and social deprived classes, where both men and women participated in subsistence farming and other occupations.

Betweenmid-19th and mid-20th century women played a significant role in the freedom movement. Several reforms such asabolition of sati by law, child marriage, widow re-marriage and alsochallenged the kinship structures of women subordination, sexual division of labour, and caste hierarchies. After mid-20th century, the post-independence period, the constitution of India empowers the government to make special provisions for gender equality. Under article 15 of the Indian Constitution women are free to participate in all the economic, education, political, cultural and religious activities. In addition, several other provisions and social protection measures have been taken by Indian government to encourage gender equality in all spheres.

However, the results are not encouraging in the economic front as women’s participation in labour force is still very low and shown a consistent decline over the last seven decades period.

As per the national sample survey office estimated, the women in labour force was peaked at 33 per cent in 1972-73 and declined at 26 per cent in 1999-00 and further reduced to 18 per cent in 2018-19.  As per the Periodic Labour Force Survey (PLFS), 2018-19, women’s participation in employment in is significantly less than their male counterparts, as a little less than one-fifth of women compared to 52 per cent of men were engaged in economic activities before the COVID-19 pandemic.The pandemic has further accentuated women’s participation in workforce as McKinsey report highlighted that they account for 23 per cent of overall job losses recorded after pandemic in India. The high participation of unpaid domestic work is attributed one of prime reasons for the low participation rate for women in the labour force. Since the beginnings of the pandemic women are spending more hours on the unpaid domestic work such as cooking, cleaning and child care. In addition to economically valuable work outside home women seem to be bearing the extra burden of unpaid work at home. The paid work of women is suffering, as they are compelled to replace paid work with unpaid work.

Women do an average of 75 per cent of the world’s total unpaid care work include child care, caring for the elderly, disables, and domestic work such as cooking, cleaning, washing clothes and utensils, etc. Women’s unpaid care and domestic work is often invisible but has value. International Labour Organization (ILO) estimated about 16.4 billion hours are spent by women on unpaid care work every day – the equivalent of 2 billion people working 8 hours per day without payment. The actual value of this work amounts to 9 per cent of global GDP – equivalent to USD 11 trillion, while women’s unpaid work is estimated to be valued at almost 40 percent of India’s GDP.

But globally, more people are now at home than ever, due to pandemic-related measures, as a result the emerging new norms of work from home, online education, the lack of services of domestic workers particularly in urban areas, the need to perform unpaid domestic work has intensified exponentiallysince the pandemic.  In India also owing to existing gender division of labour and social norms time for both working and non-working women on unpaid activities since the pandemic has increased disproportionately. These unpaid activities are time-consuming and physically tiring, and leave little or no time in the day to undertake all the activities one is required to perform or desires to undertake like education or employment, or leisure. This growing demand of unpaid work increasingly reduces women’s opportunities to participate in productive economic activities. Therefore, the implications of pandemic on women, in particular, are immense, because they are associated with the ‘double burden’ of paid and unpaid work.

This problem is even starker in India due to many unpaid activities that simply cannot be outsourced because market substitutes or State provisions do not exist.

As per the UN Women Global survey, since the spread of COVID-19 pandemic around 28 per cent of women and 16 per cent of men said that the intensity of their unpaid domestic work has increased. This global crisis has exposed the fact that the world’s economies and our daily lives are made possible by the unpaid care work of women, which is often invisible and under-valued. The survey conducted also reveals that before pandemic, the average time spent on childcare by women was approximately 223 minutes per day; but since the pandemic began, they spend approximately 266 minutes per day, which is even higher at 266 minutes per day in case of India. Similarly, several other estimates show that the pandemic has disproportionately increased the women’s time upto 30 percent more on family responsibilities in the country. In particular, the women work in informal sector and those from poor families are most affected by pandemic as they work for their survival but now have much less time for the paid work due to increasing burden of unpaid domestic work.  It is very much clear that the pandemic has increased the demand of unpaid domestic and care work is deepening the existing gender inequality in the labour market. The pandemic has provided an opportunity to be transformative, and to recognise, reduce and redistribute unpaid domestic and care work. Immediate steps are needed to ensure that pandemic does not reverse the gender equality progress achieved by India over several decades in many fronts, particularly to reduce the unpaid domestic and care work.

Nidhi Mehta is Director at The Vision. Balwant Singh Mehta is ‘Senior Faculty’ at Institute for Human Development (IHD), New Delhi. He can be reached on twitter @DrBalwantsing19