Multilateral dialogue at the regional and global levels that engages all relevant stakeholders are critical in migration governance. 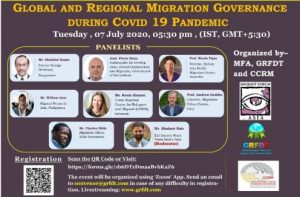 As states grapple with the twin crises of COVID-19 and a migration, the need to understand global and regional frameworks governing migration has increased. Tracing the beginnings of migration as a global issue to the UN International Conference on Population and Development (ICPD) held in Cairo in 1994, Shabari Nair, Labour Migration Specialist for South Asia, based in the ILO Decent Work Technical Support Team (DWT) in New Delhi, shared the notable milestones since then. Shabari was speaking at the joint webinar organised by the Migrant Forum in Asia (MFA) Global Research Forum on Diaspora and Transnationalism (GRFDT), and the Cross Regional Center for Refugees and Migrants (CCRM) on “Global and Regional Migration Governance during COVID-19 Pandemic.” He added at the establishment of the Global Commission on International Migration (GCIM), hosting of the first UN High Level Dialogue on Migration; adoption of the Sustainable Development Goals (SDGs), and more recently the Global Compact for Migration (GCM) in 2018, as some of the major milestones. Further Shabari shared that at the regional level intergovernmental organisations such as SAARC and ASEAN and Regional Consultative Processes such as Abu Dialogue, Colombo Process, and Bali Process are all engaged on migration issues.

Global Migration Governance and Rights
Since the 1990s migration governance has been governed mainly by non-binding instruments and the migrant worker conventions remain under-ratified, especially by destination countries. Even among those states that have ratified the instruments, implementation remains lax. Migration management has hitherto been rooted in an economic and securitisation approach. This prioritisation of migration management over rights-based approach is reflected in the priority accorded to regulation, port of control and return of migrants to the detriment of paying more attention to the governance of the workplace. William Gois of the Philippines linked the deficit of human rights in the migration discourse to the politicisation of the issue. Migration is not a popular topic for political leaders.

Any politician who takes on the issue of migration from a rights-based perspective is not going to curry favour with a domestic audience.

States are the key constituents of global migration governance, designing and funding the many relevant international institutions such as ILO and IOM. States have been diverting funding to border management rather than in the workplace which contributes to the overlooking of migrant rights. Even though rights exist on paper, a huge gap remains in terms of translating them into practice and Prof. Piper claimed this discrepancy is highly relevant to the ongoing pandemic. Many undocumented workers have been key essential workers during this pandemic, but COVID-19 has seen many employers withholding wages. Prof. Nicola Piper highlighted that enormous barriers had been put in place to prevent migrants from seeking justice and organising politically. Moreover, great resistance exists to extending protections to undocumented migrants despite the non-discriminatory nature of COVID-19.

Pandemic Reshaping Migration
According to Shahidul Haque, former Foreign Secretary, Bangladesh, the world order is in flux. Geopolitical tensions, new economic landscape comprising of gig workers, and the collapse of post-World War II liberal order are some of the ongoing changes. The pandemic has accelerated some of these changes to affect migration and mobility. The politicisation of migration has heightened and COVID-19 is being wielded as a weapon to restrict mobility. An unexpected consequence of the pandemic has been a large-scale migration crisis which Haque claimed was the first of its kind in that it was not born out of migrants themselves. 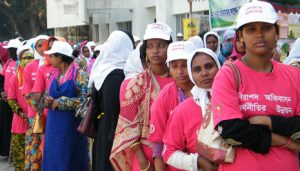 The pandemic has necessitated a fundamental rethinking of migration. Even though migration finds itself at a crossroads at present, Haque argued that migration will not stop. The GCM, the only comprehensive global framework for governing migration, will continue to operate. However, he emphasised the need for a global dialogue on migration governance that is reflective of changing realities and circumstances. In the absence of such a dialogue, the future of migration will remain ad-hoc and make victims of migrants everywhere. Echoing a similar sentiment, Ambassador Pietro Mona of Switzerland also called on governments to resist the retreat to nationalism and embrace multilateralism to address migration challenges.

The challenges facing migrants in the midst of COVID-19 have been touched upon in the past in the UN during negotiations of the GCM as well as at the regional level. The pandemic has not only exacerbated these vulnerabilities, but also shown a light on the weakness of the current system at all levels. According to Ambassador Mona, many of the ongoing challenges such as labour rights, protective measures for domestic workers, remittances, mobility, return and reintegration, etc. have been deliberated upon before and solutions have been devised. However, he also contends that implementation has suffered due to an absence of political will.

Despite the lack of concrete action on the ground, Hamati argued that the value of these global frameworks was in norms and standard setting. Since countries are invested in belonging to the global community, there is an incentive for them to undertake reforms to meet certain standards. The GCC countries have made numerous policy reforms over the past few years on labour governance, human trafficking, and irregular migration. In order to make such reforms a more comprehensive process, it is important to move beyond the low-hanging fruit approach. The pandemic has impacted migration by heralding a resurgence of states as primary actors in migration governance.

In the Horn of Africa, Charles Obila pointed out that a recent political decision had been taken by the heads of states coming together to develop a regional response strategy which specifically mentioned migrants and refugees. Even though discussions have been initiated with the GCC countries and Southern Africa on involuntary return and deportations of migrants, a huge pile up of migrants in urban areas in the Horn of Africa countries persists. The region had also seen support from the EU, Sweden and Switzerland for such initiatives that ensured no one is left behind in the fight against COVID-19.

Migration has been a key component of EU–African relations. The previous migration crisis in 2015 spurred a political crisis in Europe and drove numerous global developments including the creation of the Global Compact on Migration.

However, Prof. Andrew Geddes argued that neither the 2015 crisis nor the 2008 financial crisis resulted in significant institutional and policy changes in the EU. Therefore, he expects that COVID-19 is also unlikely to result in fundamental alterations to existing EU migration and asylum policies. Similar to global dynamics, immigration has become politicized in the EU as well. However, Prof. Geddes highlighted that it was a misunderstanding that attitudes toward migration had become more negative in the region. On the contrary, he claimed that what had happened was the increasing salience of migration as an issue. Immigration has now become a new dividing line in the EU and regional integration has become associated with this new dividing line.

Future of Migration Governance
Ambassador Mona proposed a two-prong approach to devising the future of migration governance: horizontal adaptation and vertical expansion. A horizontal expansion of existing governance structure that includes all partners including private sector, civil society organisations (CSOs), trade unions, and local authorities is extremely important. Simultaneously, it is also important to make connections between migration issues and overarching themes that governments are addressing. Such a vertical expansion would take the form of addressing challenges of domestic workers by tying it in a broader gender policy; ensuring access of migrants to healthcare ties in to a broader debate on public healthcare.

In line with Ambassador Mona’s horizontal adaptation, Gois also said it is important to note who is seated at the negotiating table and also in what capacity are they involved in the negotiations. Are the non-state actors there to contribute, participate, and design? Multilateral negotiations need to also diverge from current practice of going for the lowest-hanging fruit and seek more ambitious solutions. COVID-19 has necessitated the need to look at migrants as neither different nor alien, but as those who live within the jurisdiction of our state. Therefore, it becomes the obligation of the state to protect them with rights and duties without discrimination. This will only be possible once an honest assessment has been made of what has happened to migrants during these times. According to Gois, the pandemic has made us lose our sense of what human dignity is all about.

Any attainment of global objectives is contingent on the region and its adoption of regional standards. The European Commission is currently developing a new compact on migration. According to Prof. Andrew Geddes the response in Europe to this new compact will be extremely important. The survival of the EU may not hinge on the adoption of this Compact, but the rejection of the Compact by a number of member states will expose the potential limits of regionalism. Prof. Geddes contended that if we were to see limits to regionalism, we would then see limits to globalisation. Similarly, in the Asian context, Gois called on Asia to identify its shared reality by putting aside politics and see each other not as independent states, but as neighbours coming together.

The SDGs talk about “leaving no one behind”, but as the panellists pointed out COVID-19 has left most migrants behind. The narrative surrounding migrants has shifted from one of promise to dread – from economic heroes to disease carriers. Multilateral dialogue at the regional and global levels that engages all relevant stakeholders are thus critical in migration governance. A burning house needs to rebuilt, for which ideas are key and only dialogue can contribute to the flourishing of such ideas.