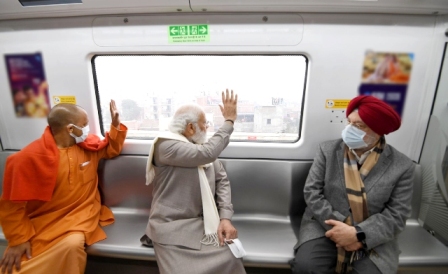 Kanpur Metro Rail Project and undertook a metro ride from the IIT metro station to Geeta Nagar. He also inaugurated the Bina-Panki Multiproduct Pipeline Project. The pipeline extends from the Bina refinery in Madhya Pradesh to Panki in Kanpur and will help the region access petroleum products from the Bina refinery. Chief Minister of Uttar Pradesh, Shri Yogi Adityanath, Union Minister Shri Hardeep Puri were among those present on the occasion.

The Prime Minister congratulated the people of Kanpur for the metro connectivity and for the inauguration of the pipeline project. Recalling his long association with the city, he started his speech with many local references and a light-hearted comment on the carefree and fun-loving nature of the people of Kanpur. He also mentioned the city’s role in shaping the stalwarts like Deen Dayal Upadhyaya, Atal Bihari Vajpayee and Sundar Singh Bhandari. He also noted today’s day i.e Tuesday and invoked the blessings of Panki Wale Hanuman ji for another golden chapter being added in the development of Uttar Pradesh. “The double engine government of Uttar Pradesh today is trying to make up for the loss of time in the past. We are working at double speed”, he said.

The Prime Minister noted the change of the image for the state of Uttar Pradesh. A state, he said, that was known for illegal arms is now the hub of the Defence Corridor, contributing to the safety and security of the country. Commenting on the work culture of adhering to deadlines, the Prime Minister said that double engine governments work day and night to complete the work for which the foundation stones have been laid. “Our government laid the foundation stone of Kanpur Metro, our government is also dedicating it. Our government laid the foundation stone of Purvanchal Expressway, our own government completed its work”, Shri Modi clarified. He listed major achievements like upcoming largest international airport in Uttar Pradesh, longest expressway of the country is also getting built in the state and Dedicated Freight Corridor hub coming up in Uttar Pradesh.

Noting the uneven development of the past, the Prime Minister said for decades, if one part was developed, the other was left behind. “At the level of the states, it is equally important to remove this inequality in society. That is why our government is working on the mantra of Sabka Saath Sabka Vikas”, he emphasized.  The Prime Minister said that understanding the needs of the state, the double engine government is doing a solid job. Earlier, piped water was not reaching crores of households in Uttar Pradesh. Today we are engaged in providing clean water to every household of UP through the Har Ghar Jal Mission’ The Prime Minister pointed out.

The Double Engine Government is working sincerely and with accountability to take Uttar Pradesh to new heights of development. The double engine government knows how to set big goals and how to achieve them. He gave examples of improvement in transmission, electricity situation, cleanliness of cities and rivers. He informed, compared to the mere 2.5 lakh houses for urban poor of the state by 2014, 17 lakh houses have been approved in the last four and half years. Similarly street vendors got Government attention for the first time and through PM Svanidhi Yojna, more than 7 lakh people got more than 700 crore rupees in the state. During the pandemic the government arranged for free ration for more than 15 crore citizens in the state. In 2014 there were just 14 crore LPG connections in the country. Now there are more than 30 crore. In Uttar Pradesh only, 1.60 crore families got new LPG connections.

Referring to the improved law and order situation, the Prime Minister mentioned the elimination of the mafia culture by the Yogi Government leading to an increase in investment in UP. In order to promote the culture of business and industry, the government has approved a Mega Leather Cluster in Kanpur and a Fazalganj. Defence Corridor and schemes like One District One Product will benefit entrepreneurs and businessmen of Kanpur, he said. He also said criminals are on a backfoot due to the fear of law. He also referred to recent unearthing of illegal money through official raids and said that people are seeing the work culture of such people.

Centre Released the Atal Ranking of Institutions on Innovation Achievements