A team of scientists at Council of Scientific and Industrial Research’s Central Electrochemical Research Institute (CSIR-CECRI), Karaikudi, Tamil Nadu, has developed a flexible low cost, wearable sensor that can 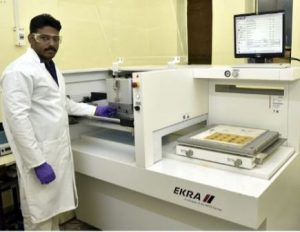 monitor the health and physiological status of the human body on the go by just analysing the sweat.

The microfluidic sensor can be used for on the spot monitoring of several biomarkers such as lactate, Sodium, and Potassium simultaneously from sweat samples. It analyses the biomarkers without any transfer of signals. The high-throughput sweat sampling ability of the sensor facilitates continuous capture and transport of the sweat over the surface of the device resulting in real-time analysis.

A fluidic channel in the sensor captures real-time sweat and directs it through the active sensing electrodes for subsequent interference-free analyses. A miniaturized printed circuit board collects cross-talk-free sensor responses without the need for wires.

The team led by Dr. Vinu, who is a recipient of the INSPIRE Faculty Fellowship instituted by the Department of Science & Technology, Government of India, has published a report on their work in the journal ‘ACS Sensor’.

They are also exploring other biofluids such as saliva and fluid in tissues for such monitors as they contain abundant chemical markers that could reflect the underlying physiology of the human body. Besides, they are working on developing wearable energy storage devices for powering wearable electrochemical sensors.

The team, among other things, has developed a solid-state flexible and stretchable supercapacitor as an energy buffering element for powering a wearable pulse rate sensor. A report on the work was published in NanoEnergy journal.