The Rajya Sabha on Thursday cleared The Insurance (Amendment) Bill, 2021, raising the limit of foreign direct investment in Indian insurance companies from 49 per cent to 74 per cent. The bill was cleared among 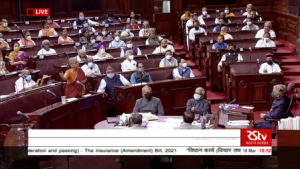 The bill was introduced by Finance Minister Nirmala Sitharaman in the RS on March 15, 2021, and seeks to amend The Insurance Act, 1938. As per the statement of purpose of the Insurance bill 2021, it seeks substitution of sub-clause (b) in the definition of “Indian insurance company” in clause (7A) of section 2 of the Insurance Act, 1938, so as to raise the limit of foreign investment in an Indian insurance company from the existing 49 percent. to 74 percent. and to allow foreign ownership and control with safeguards.

The Insurance Act was first amended in 2000 to allow foreign direct investment of 26%. The cap was later raised in 2015 to 49%. Several members in the opposition questioned the need for this bill, stating that increased foreign investment was not required in the insurance sector. While stating that several private players in the sector had reached the 49% limit, Mrs. Sitharaman said, “Since the FDI was raised in 2015, over Rs 26,000 crores have come in as foreign equity, which is a lot of money for the country. IRDAI, the main insurance regulator in the country, also consulted several stakeholders and showed support for increasing FDI.”

There was a war of words between majority and opposition members as the latter raised slogans against the privatization of public assets.

Transport Minister Nitin Gadkari took to both houses of the parliament to announce the new vehicle scrapping policy that mandates scrapping of 15-year-old commercial vehicles and 20-year-old personal vehicles. In his speech, the minister said that upon reaching the end of the above-mentioned timelines, vehicles would undergo a fitness test at a center near them.

He said that the new policy is bound to result in cheaper vehicles as manufacturing costs would reduce due to the decreased price of copper, aluminium, steel, rubber, and plastic. “People who buy new vehicles with a scrapping certificate will also get a 5% discount on the purchase, along with road tax and registration fee being waived off,” he said.

He further added that pieces of scrap would also improve research in the sector of electric vehicles. “We are also planning to bring scrap from neighbouring countries after setting up an Integrated Vehicle Scrapping Facility in Gujarat. “This policy will also help increase the might of the automobile sector from the current turnover of Rs 7 lakh crore to Rs 10 lakh crore in another 5 years. It will also increase employment in the sector, and of course the country’s fuel efficiency,” he added.