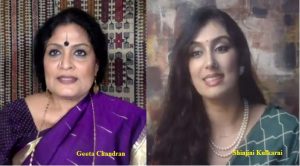 If we had invested more in arts and education there wouldn’t have been so much violence and stress around us. The arts do make you more sensitive.” The versatile dance teacher, activist and founder-president of Natya Vriksha dance school engaged in an hour-long session of Ek Mulakat Visesh organized by Prabha Khaitan Foundation and presented by Shree Cement.

Geeta Chandran, who has worked in television, video, film, theatre, shared her views and life’s experience in a freewheeling online session with danseuse Shinjini Kulkarni of Ehsaas, Women of Noida, and was joined in by attendees from across India. Geeta Chandran has been experimenting by collaborating with cross arts like puppetry and martial arts and also within Bharatanatyam, drawing the ire of many from the traditional schools of Bharatayam.

“Earlier, all the audience were for kathak. Bharatanatyam used to be given a time slot like1 o’clock or 2 o’clock at night after all other artists had performed. It used to be like that in those days. I had fast paced my dance and it paid off. Getting non-dancers as an audience was a trade off,” Geeta said.

I think people have really slogged to work for an audience in Bharatanatyam. My humble pranams to those who paved the way for us to come in so easily and have an audience. Bharatnatyam is deeply enmeshed in the culture of Tamil Nadu and completely rooted in the tradition in it’s not so structured form because after that it got very structured and institutionalized teaching happened,” Geeta Chandran said.

“I started teaching in the 90s by Guru Dakshina Murthy sir. Initially I was just helping him in his Academy and he used to make me sit and watch me teach his students and he used to correct me as you get along so I was very blessed to be taught to teach,” Geeta said.

Referring to the style of teaching Bharatanatyam and her school Natya Vriksha, Geeta said, “I realised that children in metropolises were chasing a dream to become International citizens yet grounded in their own tradition. So I had to think of a pedagogy that clicked with the new generation and overcome the disconnects at many levels. So we created space using a lot of colours, texture, myths, music and form, because I feel the aesthetic qualities cannot be taught. It has to be experienced. All these things have been built into the pedagogy which triggers curiosity.

“We must give our young generation dancers a lot of freedom as they are under a lot of pressure and go about like robots. Teacher-student dialogue is very important and my teacher had never had a dialogue. It was a one way very strict kind of thing. I didn’t want that, I wanted to be a friend to my students.”

Responding to a question if it was necessary to be spiritual to learn dance, Geeta said, “I don’t think so. I think every soul is different, every person is different; everybody is different; and everybody is equally valid. They bring to the dance what they think is their own. I have had students who are non-believers and I think they danced beautifully bringing in an intensity which is different.”

Performing Seva at Vrindavan’s Radha Raman Ji temple was a life-altering experience for Geeta, “I was part of the Seva, I was not dancing. I just want to be a part of the Seva at Radha Raman ji and he just took over my whole being and he has that power there and after that there was no looking back I used to go almost every year for Seva that is a completely new experience for me I had read so much of dancers doing Seva in the south because Bharatanatyam was very much a part of the ritualistic tradition in the South Indian temples. Every piece, particularly from a Bharatanatyam tradition, addressed one temple deity or the other. It almost came alive when you were actually doing Seva in the temple. You are not bothered about your audience. It was like one to one with your ishta devta. You are offering your entire being through your art to the divine. So. Yes! It was a completely different feeling.”