Modernisation, industrialisation and urbanisation in India have been literally burning the farmers for a very long time. As per NSSO 70th Round data only around 36 per cent of produce 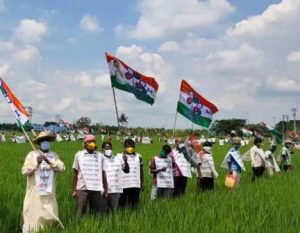 and around 11.5 per cent farmers seemed to be interfacing with the Agricultural Produce Market Committee (APMC) mandi system, except for the sugarcane farming, which is essentially contractual farming. That’s where the farm policies have been post-Independence, and the Farm Acts 2020 is just one another nail on the coffins of the agriculture sector. Hence, we need to place the entire Farm Acts 2020 in the larger context of what the country has been doing to the agriculture sector since Independence and understand them from that larger broader context of “rural appropriation” as suggested by B.D. Sharma.

With this aim Praxis along with Partners in Change organised a webinar where they brought on board farmers from across the country and also organisations supporting the cause of farmers. Opening the discussion was Ravdeep, a farmer from Punjab, who has resorted to organic farming since 2012. He shared that the old system of agriculture was self-sustaining and the market depended on the farmers and not the other way round. However, after the Green Revolution the natural resource and the traditional systems of agriculture faced a lot of damage. “Previously there was a system in the Basmati farming where all the buyers together decidedon the rate of the produce. If the quality if the produce was in abundance the price used to be less, but after the Green Revolution everything started coming from the market. It has ruined our diversity, health as well as our economy”, he said. He also cited an example of poultry farming where more than 90 per cent of the farming was controlled by the private companies. Initially the farmers were given a lot of privileges, but after a few years with the contract and rules, theywere bounded to such an extent that they could neither leave nor make any profits. “There should have been discussion with the farmers while devising the policies. Personally, I don’t see that these Farm Acts will do any good to the farmers”, Ravdeep shared.

Other challenges that cropped up with the new Farm Acts were lack of Minimum Support Price (MSP) and introduction of online system for procurement. Balindra Saikia, Convenor, Krisak Mahasabha and State Convenor Assam, AIKSCC, shared that more than 1200 tea gardens in Assam were all taken over by multinational companies accounting for 17 per cent of the total production. With no MSP and companies fixing the price, the farmers’ suicide was bound to increase. Jeevan Dasu Ade a small-scale farmer of cotton and soya beanalso shared his struggle with the online system of procurement and the inclination of the new policy towards the benefit of the large-scale farmers. Bhairab Saini, another organic farmer from West Bengal, shared that at present the price at which they were selling rice in open markets was Rs900-1000 per quintal while during July-August the price was Rs 1800–1900 per quintal in the retail mandi. He feared that if MSP is not there, the corporates will completely take over the market.

Taking the discussion further was Thungdemo Ovung, a Bio-Entrepreneur, a scientist by profession and an organic farmer by occupation in Nagaland. According to him the people in Nagaland do not have any issue with their current marketing system and they feared that with the new contract system the farmers will not have any control over price the price of their produce. “They (big corporates) will absolutely bully us and small marginal farmers don’t have the voice to debate or voice these issues. Such incident had happened in the past with the ginger farmers which had created distrust among them towards the large companies. It is possible that after the Farms Act2020, this will be the fate that most of the farmers in Nagaland will face as this bill will encourage such kind of buyers to come in,and hence we have mistrust in this kind of bill too”, he said.

Another issue that he voiced was that of unemployment of small retailers and vegetable vendors who sell it in the roadside or market place.

“When the corporates will buy directly from the farmers,it will create a lot of unemployment and loss of jobs for small scale retailers who are mostly women”, he added.Thungdemo feared that the contract system will affect their local ecosystem and will cause an imbalance in their agricultural and marketing system.

Kavitha is a social activist known for her work related to sustainable farm livelihoods and farmers’ rights gave a presentation which decoded the Farm Acts 2020 to a great extent. According to her the government had incorrect assumptions while creating the new Acts. The government believed that farmers were not free to sell anywhere they like in the existing states under APMC Act which was not true.The freedom always existed for farmers,but it was the buyers who had placed restrictions on them. Other misconceptions were that farmers were all trading under oppressive, exploitative APMC regimes,that more marketing channels will give better price discovery for farmers and that many fair-playing, non-cartelizing buyers would line up and buy from farmers directly without any intermediaries and aggregators and the freed up middleperson margins will accrue to farmers. The government was also wrong when it assumed that de-regulation through the APMC Bypass Bill and the Essential Commodities Amendment Act will bring in private investment into market infrastructure and the dispute resolution mechanisms being proposed will deliver justice against exploitation of farmers.

Talking about the major anomalies in the APMC Bypass Act Kavitha highlighted that in the Act a consumer has been equated with a trader. This means that any consumer buying farmer’s produce without a PAN card or other document notified by Central Government will be committing an offence. Apart from that as per the Act the 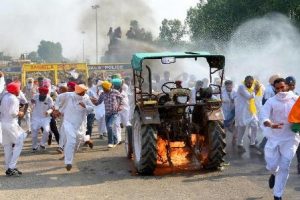 government is also over-regulating FPOs which are supposed to be autonomous farmers’ institutions. Also, while the government can’t collect taxes, fees can be charged through electronic trading and transaction platform! Coming to the Essential Commodities Amendment (ECA) Act 2020, even under extra-ordinary circumstances like war and famine, stock limits cannot be imposed on certain processors and value chain participants. Whereas in the Contract Farming Act, where everything else has been kept voluntary, the statute now puts a bar of jurisdiction of civil courts on disputes arising out of contract farming arrangements. While there is no compensation provision for farmers who could make losses in contract farming arrangement, there is a provision for the amount to be payable by the farmer in case if financial losses in the contract, “to be recovered as arrears of land revenue” – this then is a route to land alienation!

Its implications can be that the combination of APMC Bypass Act and Essential Commodities Amendment Act can be used by very big players to wipe out competition from the market after initially presenting some options to farmers and later on depressing their prices.

Also Read : Reforms for Productive Agriculture: Need of the Hour

Since dispute resolution mechanisms in APMC Bypass Act and Contract Farming Act are ineffective and inaccessible to farmers, it would become new channels of corruption/rent-seeking behaviour. With state governments weakened in terms of their regulatory powers, marginalised farmers will be further weakened and made insecure.

Supporting her views, Jayesh Joshi, a development analyst and practitioner, with more than 20 years of working experience in the development sector shared that the three bills were not for farmers or farmer security. Rather, itwas for everyone other than the farmer like the middlemen and the companies. “The mandi system has always been criticised and people have spoken of an alternate system. The notion of the farm bill gives an illusion of independence for the farmers. When big companies come,they will do farming for business and not for food. This will lead to exploitation of farmers as well as the land and environment”, he said.“In all these years, amendments in Bills (corporate bills as well) have been done without any thought for those at the margins. There needs to be a revision of this Bill. The government should think about Farmer Freedom and the security of this freedom”, he concluded.