6 hospitals have exhausted their oxygen supply for Covid affected patients, while several are a few hours away from running out. 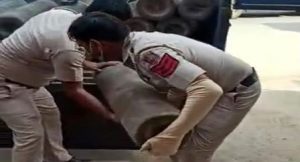 would only last a few hours. These included the GTB Hospital, the Babasaheb Ambedkar Hospital, the Rajiv Gandhi Super Specialty Hospital, the St. Stephens Hospital, and Max Super Specialty Hospital (Shalimar Bagh), among others. In private hospitals such as the Holy Family (Okhla), and the Max Super Specialty Hospital (Patparganj), the supply was said to last only 2.5 and 4 hours respectively. Many small hospitals also said that they were unable to contact their oxygen supplier. Chief operating officers at the Delhi Heart and Lung Institute said that their stocks would only last till 4 pm today. The 210-bed Mata Chanan Devi Hospital also sent an emergency alert and said that their supplier had not fulfilled the required quota of oxygen at the hospital. Officials at the Ganga Ram and LNJP Hospitals also said that their stocks were low, but were expecting them to be supplied soon.

The GTB Hospital, which also faced a horror in the late hours of April 21, again sent out an emergency alert. Officials in the Delhi government, including Health Minister Satyender Jain and the Chief Minister Arvind Kejriwal had tweeted that oxygen in the COVID hospital would run out by 2 AM. However, half an hour before the deadline, oxygen was restocked, which saved the lives of over 500 COVID affected patients. Only 10 hours later, though, the hospital sent out another alert stating that only 8 hours’ worth of oxygen was left.

As per a letter written by Deputy CM Manish Sisodia to Union Health Minister Mr. Harsh Vardhan on Thursday, 6 Delhi hospitals also ran out of oxygen supply completely. These include the Rathi Hospital, the Santom Hospital, the Saroj Super Speciality Hospital, the Shanti Mukund Hospital, the Tirath Ram Shah Hospital, and the UK Nursing Home.

In the letter, he expressed that the issue of oxygen shortage in Delhi is serious and “it will be tough to save lives after a point.” He also requested the centre to take the help of paramilitary forces in Delhi and ensure supply to severely affected COVID-19 patients in the capital.

Members of the Saroj Super Speciality Hospital also approached the Delhi High Court on Thursday morning and appealed to restock the oxygen supply. At 10 am, they informed the court that only 60 minutes’ worth of oxygen was left, and a few arrangements were being made to extend the supply for a few more hours. News agency ANI also released a video of Sunil Saggar, CEO, Shanti Mukand Hospital, who broke down in front of the camera as he spoke of diminishing oxygen supply. “We’re left with barely two hours of oxygen. We have requested doctors to discharge patients wherever possible,” he said.

The Shanti Mukund Hospital currently has 110 COVID patients. They also put up a board outside the hospital gate on Thursday, which read, “We regret that we are stopping admission in the hospital because oxygen supply is not coming.” However, late in the evening Delhi Police arrived at the spot and instructed the formation of a green corridor to supply oxygen to the hospital.

On Wednesday night, the Delhi High court had ordered the central government to provide oxygen by any means necessary to the hospitals that were running short. Representing the central government, the SG Tushar Mehta assured the court that 480 metric tons of oxygen will be provided to the national capital.

Delhi witnessed 24,638 fresh cases of the virus on Wednesday, and logged 249 deaths. The positivity rate amounted to 31.4%, meaning that one in three samples was positive. As per the official Delhi government app, only 18 Covid-ICU beds and 2166 Covid beds were available in the capital on Thursday evening.

Despite Sectorial Growth, Rural Wages Have Dwindled in the Last Six Years