Despite Sectorial Growth, Rural Wages Have Dwindled in the Last Six Years

Real wage growth in both agriculture and non-agriculture occupations has dwindled after 2014 and even went negative in 2019 for some categories.

Even with growth trends in our rural economy, rural wages in India for both men and women have declined in the last 6 years, reveals a new study by the Social & Political Research Foundation (SPRF). Published this 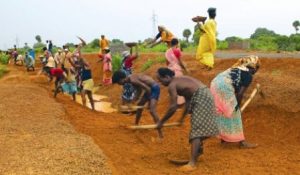 week, the paper analyses the trends and drivers behind rural India’s dismal wages. It also assesses the Union Budget 2021-22 to find distresses in the field. The study, conducted by Somiha Chatterjee and Akshita Sharma, essentially states that while there has been steady growth in India’s rural economy, the rural wages for both male and female laborers have either dipped or have remained stagnant. During the COVID-19 pandemic last year, agriculture was the only sector that recorded a 3.4% growth. Researchers point this to good monsoon, increase in cultivable land, and presence of plentiful water in irrigation reservoirs. It also states that the government’s interventions to alleviate the pandemic led to the rural economy remaining afloat.

Rural households in India primarily earn income from agriculture and allied activities or non-agricultural activities. “Real wage growth in both fields has dwindled after 2014 and even went negative in 2019 for some categories,” the study reads. 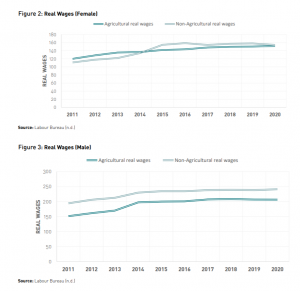 The study also evaluates the impact of inflation, which is essentially the general price rise in an economy. The general wage-price relationship in an economy means that wages must be increased during times of high inflation so that the real wages do not fall. “However, in India, while inflation rates have been in the range of 2-6% between 2014 & 2020 (falling until 2018 and rising thereafter), the real wages did not fall and rise accordingly,” it points.

Due to the absence of a nominal rise in wages, real wages fell at the time of inflation. Inflation also took over the nominal rural wages during certain periods and led to a negative real wage for rural workers.

The paper also analyses the Mahatma Gandhi National Rural Employment Generation Scheme (MNREGA) and stresses the policy’s importance in evaluating rural wages and impacting rural labour markets. It states that daily wages of agricultural and non-farm laborers rise after the introduction of the policy, and points to a 5.3% rise in real agricultural wage due to employment under MNREGA.

Also Read : Mandela (2021): A Political Satire, But a Product of the Current Times!

“The shift in labour towards work created by the scheme led to a labour shortage in agriculture, thereby driving up the wages in the sector,” it reads.

Employment under MNREGA has also slumped after 2014, which has contributed to rural wage stagnation. A shortfall in budgetary allocation is presumed as the reason behind this slump, especially because the 2021-22 MNREGA budget has been slashed by over 34%. This may have a severe impact on rural wages in the coming year. The MNREGA budget makes for 2.09% of the total Union budget, which is the lowest since 2014. 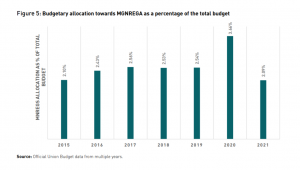 The study further reveals that both agricultural and non-agricultural wages have risen in areas with a climate that is favourable to agricultural growth.  However, the rise in petroleum and fertilizer prices has increased the farmer’s vulnerability to international price fluctuations. Budget cuts in agricultural policies have also deepened the wage crisis.

The 2019-20 Economic Survey noted that average annual growth in agriculture remained stagnant in the last six years, which has affected the farmer’s income.

The study proposed to provide training for highly demanded skills in the rural economy to boost employment and real wages. It also encouraged to increase the MNREGA budget, which may lead to drastic wage improvements for both agricultural and non-agricultural workers. “Public expenditure on rural infrastructure and rural employment programs should also be increased,” it read.

(The full study can be found here)