Delhi is on the verge of facing ‘Day Zero’, a term which gained popularity after a major water crisis in Cape Town in South Africa. Delhi’s crisis could be more severe in nature than that of Cape Town, as the problem has never been discussed in the public domain and no alternatives have been explored to fix it.

South Africa’s capital Cape Town is believed to be the first big city to face water crisis at such a large scale, and it already faced Cape Town ‘Day Zero’ last year. India could be facing a similar crisis in the coming decades despite being surrounded by water bodies on all the three sides. Does that mean, we don’t have enough resources, or we are not able to use technology judiciously?

In India, most of the water is supplied through reservoirs created by dams, which are depleting fast. India is also the world’s largest user of groundwater accounting for 25 per cent of the world’s extracted groundwater.

One of the major causes of water shortage in India is depleting water resources.

According to NITI Aayog’s report on Composite Water Management Index (CWMI), 2018, India is currently suffering from the worst water crisis in its history. Six hundred million people are facing high to extreme water stress. Seventy five per cent of households do not have drinking water on their premises and eighty four per cent rural households do not have piped water access. Shockingly, 70 per cent of our water is contaminated, ranking India at 120 among 122 countries by way of water quality index. Thus, data-based decision-making will be a critical yardstick for effective water management in India.

“The CWMI is the country’s first comprehensive database for water at a national level. The Water Index seeks to promote the principle of “competitive and cooperative federalism” and support innovation in the water ecosystem in India.”

The index’s analysis looks at various states’ performances based upon series of key water indicators which focus on overall national and sectoral analysis.

NITI Aayog in its report has stated that Delhi, believed to be one of the most developed places in India, along with several other major cities of will run out of water by the year 2020. Also, 40 per cent of the country will have no access to water by the year 2030.

Even though water crisis has remained one of the major challenges for the capital’s growing population since decades, surprisingly, experts opine the city is actually blessed with abundant water resources. However, poor planning, corruption and faulty distribution are the main causes for the water shortage.

On whom should the blame fall upon?

The centre, the state govt, or the citizens of Delhi?

Delhi is on the verge of facing ‘Day Zero’, a term which gained popularity after the major water crisis in Cape Town in South Africa. Delhi’s crisis could be more severe in nature than that of Cape Town, as the problem has never been discussed in the public domain and no alternatives have been explored to fix it. There is no media coverage or any political party is concerned enough to solve this menace. None of the election manifestos of the political parties find any reflections about the acute water crisis and solutions.

Delhi is already making headlines for increase in crime rates, for one of the worst air indexes and for depletion of its green belt in the name of development. The water crisis or shortage of water will take a heavy toll on the city. According to a report by Quartz, Delhi is running out of water at the rate of over three centimetres of reserves from the earth’s surface and underground, every year. In the past decade, Delhi has lost over a metre of groundwater.

As a result, residents in Delhi are forced to use borewells which has already pushed the groundwater levels to a higher risk than before. Delhi has around four to five lakh borewells, mostly run by illegal sources under the name of ‘water mafia’. Despite repeated warnings from the National Green Tribunal (NGT), the concerned authorities have failed to work upon the matter. Thus, people belonging to the lower income strata are forced to buy water from these tankers which puts them at a greater health risk.

“Not only water crisis, Delhi is crippled due to air pollution and development at the cost of environment.”

Recently, residents of south Delhi witnessed ‘Chipko-like’ movement. Hundreds of people from south Delhi and other parts of Delhi protested against the felling of nearly 20,000 trees in the name of various developmental projects in South Delhi.

Various petitions filed in NGT have yielded no replies nor have any concrete steps been taken by the concerned authorities. The Aam Aadmi Party also took part in it, alleging that the project is being executed under the supervision of Lieutenant Governor and Central Government.

Residents of South Delhi localities like Sarojini Nagar, Netaji Nagar and Vasant Kunj, complain that the trees are the only source of fresh air in the city and home to various species of birds. The removal of the greenbelt will have a serious impact on the air quality and environment. Until now the residents of Delhi are clueless whether the ‘contemporary afforestation’ was ensured with respect to the trees.

According to the System of Air Quality and Weather Forecasting and Research Institute (SAFAR), Delhi’s air quality falls in the ‘very poor’ category. India is among the top countries with ‘hazardous’ pollution having an AQI (Air Quality Index) of 300+ signifying ‘health alert’ in the country. It is high time that India, particularly Delhi, starts adopting environment-friendly techniques to rectify its water crisis and air quality index towards a sustainable future.

“What’s done is done. What’s gone is gone.” We must focus upon other alternatives and policies to improve the current scenario.

What can be done?

To meet the shortage of groundwater in Delhi, the best solution is to regenerate groundwater. We also need ‘rainwater harvesting techniques’ to be installed in our homes, schools, public and private buildings. Nearly 60 to 80 per cent rainwater gets wasted and goes into sewers. During monsoon season, this technique will serve as a rescue operation for water crisis in India.

We can also reinvent our dry lakes and dry ponds like in Hauz Khaz Lake. These lakes and ponds serve as a habitat to aquatic life and help in maintaining the ecosystem. 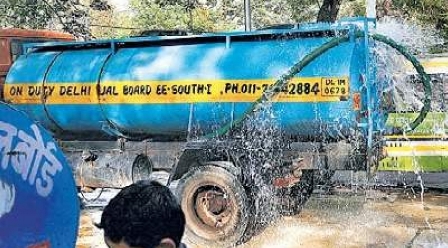 The government’s stand on Delhi’s water crisis is for the citizens to make extra efforts to conserve water at homes. Small steps on a day to day basis by everyone will be a major boost. For instance, over-flowing tanks, running water while brushing teeth, flushing in the toilets, watering plants or washing cars can be replaced by using water conservatively by using mugs. Let us practice some water literacy!

Resident Welfare Associations (RWA) and Delhi Development Authority (DDA) must have a proper system of rainwater harvesting. Also, we need to divert our sewage water to water treatment plants. Delhi can reverse and beat the water crisis within a span of five years if urban planning is done properly and judicious use of the available resources is ensured by adopting techniques which the other countries are following.

“By focusing on such methods, Delhi can also tackle the increasing pollution levels in river Yamuna. Delhi, by soliciting the support of Haryana should evolve a policy of conserving water and saving our rivers, rather than fighting over water politics.”

India must learn from the Singapore, which has no freshwater lakes or aquifers. They don’t have any natural water supply, but are tackling the water crisis efficiently. In Singapore, 30 per cent of the water comes from recycled water, 20 per cent from various high-tech rainwater systems and 10 per cent is met by desalination.

Various other countries with scarce water resources are also incorporating innovative solutions for diversifying water sources. Countries like Saudi Arabia and Israel are producing water through desalination. In fact, Saudi Arabia is the largest producer of desalinated water in the world. It’s also planning to power all the desalination plants through solar technology. On the other hand, countries like Greece and United Kingdom are foraying into innovative techniques of water management. Greece’s geothermal renewable energy is plentiful to run geothermal desalination project. The project provides desalinated water at low costs to the citizens. United Kingdom through its Smart Water Metering Technology is able to monitor water usage online.

Therefore, India should also adopt similar policies. Tamil Nadu government has made it mandatory for all the buildings to be equipped with rainwater harvesting structures, based on the ‘UN system’ making it the first state to do so in India.

Keeping in mind SDG 11 for ‘Sustainable Cities and Communities’, we must resolve these urgent issues.

The writer, a public policy researcher, is a Masters Student at School of Law, Governance and Citzenship, Ambedkar University Delhi. She can be reached on twitter @SharmaParni

Half of glaciers in Satluj basin may disappear by 2050: study

World Happiness Report: Why wellness is interlinked with employment