While the current East Delhi MP Gautam Gambhir prides on reducing the height of the Ghazipur landfill, locals are still struggling to breathe in the shadow of Asia’s largest garbage mountain.

For 36 years now, the residents of East Delhi’s Ghazipur have been breathing toxic air, emanating from its very own mountain of shame: the Ghazipur landfill. Estimated to have reached a height of 65m in 2019, the 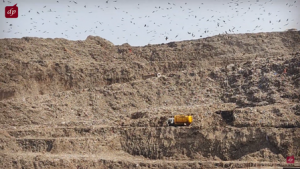 Ghazipur landfillis Asia’s largest garbage mountain today. However, recently cricketer turned parliamentarian elected from East Delhi, Bharatiya Janata Party’s Gautam Gambhir, has been acclaimed to have brought down the mountain’s height by several meters in his ongoing tenure. “I have made 8 trips to the landfill in the last 1.5 years, and we have been able to reduce the height by 12 m,” Mr Gambhir said in a recent interview. He also made a similar statement in January 2021, where he added that he wishes to do away with the landfill entirely by 2024. The landfill today receives 2000–2500 million tons (MT) of Delhi’s garbage on a daily basis.

According to the environmental documentation platform EJ Atlas, the landfill has over 4.47 MT of garbage that has been deposited on its ground over the last 36 years. With the help of trammel machines, many of which were inaugurated in the presence of Mr Gambhir, the landfill processes about 3000 MT of garbage every day.

Also Read : Change is in the air

The landfill was first set up in 1984 and achieved its peak height in 2002. The permissible limit of the landfill, according to the former East Delhi Municipal Corporation Commissioner, Dr Dilraj Kaur, is 25 m. At the time, there was a hue and cry to eradicate and contain the landfill entirely by 2004, but the process slowed down.

According to EDMC records, a measurement of the landfill in 2017 evaluated its height to 65 m, just a little below the Qutub Minar or the Taj Mahal (73 m). In September of the same year, a massive trash-slide in the adjoining area of Mulla Colony led to the death of 2 residents. As per reports, the trash-slide was triggered by an internal blast in the garbage mountain. In November 2020, another fire erupted in the landfill, which by then had become common practice for the residents. “In both the incidents, the entire area was filled with smoke for km. We could not breathe, and could hardly see. All the colonies around the landfill were affected,” said Fitoor Rehman, a resident of the Mulla Colony.

It was after this incident that the will to eradicate the mountain resurfaced in the political and social circles of Delhi.

Local members that this reporter spoke to feel that Mr Gambhir has been working in their aid. Due to the introduction of new trammel machines, a lot more garbage is being processed now. “With the help of these machines, we are able to melt/break down the garbage after segregating it. We then use it as manure and put in local parks around the city,” said Rajeev Kumar, Municipal Corporator, Dallupura Ward. Mr Kumar, who has been working in close association with Mr Gambhir adds that the height has indeed reduced by 12 m. “According to our latest measurement, it has come down to the height of 54 m,” he said.

However, residents of the Ghazipur Dairy Farm, located adjacent to the landfill and on the opposite side of the Mulla Colony, say that there is a lot more garbage being thrown onto their side now. “Garbage trucks have been coming to the landfill every 5 minutes, and most of it is now being dumped towards our area. This is especially threatening because there is no gap between our homes and the landfill,” says M. Murtaza, General Secretary of the local RWA. “I have requested them to stop multiple times, but they still keep doing it secretly at night,” he added.

He further said that whenever Mr Gambhir comes to the landfill, the administrators of the plant take him to the other side (where machines have been installed to process the garbage) and do not guide him towards the Ghazipur dairy farm side. Despite repeated attempts to reach out to him, Mr Gambhir did not respond to our questions.

“Since there is no gap, there is a big accident in waiting. Monsoon is around the corner and that is when an increased amount of gas develops in the mountain. A blast could take place anytime,” Murtaza added. Municipal Corporator Mr Kumar agreed and said that due to the ongoing work, more garbage is being dumped on the side of the Ghazipur Dairy Farm.

Large amounts of methane are generated through the decomposition of organic waste in anaerobic conditions (which is often the case when unsegregated waste is piled up). This makes the landfill a giant greenhouse gas emitter. Released gases regularly result in fires and occasional explosions, which have led to a deterioration of local residents’ health. Another local Ashraf Hussain said that it especially harms the health of their children. “Our kids have to travel miles to go to school since they take a route that does not pass through the landfill. Several of our neighbours have died due to severe pollution levels, and those with asthma suffer even more,” he said.

A local doctor, Sonu Kumar, adds that he gets 3–4 patients every day who develop bronchitis. “About 30 patients every month that I attend to are diagnosed with bronchitis and 4–5 with asthma. Women in the area suffer from anaemia and Vitamin D deficiency,” he said, further adding that his own health has worsened in the 11 years he has been in this area.

Water supply adds to the residents’ woes as the water supplied through the pipeline is hardly ever clean. “We can barely use it to wash dishes or take a bath, let alone drinking. Everyone here buys canisters of drinking water every 2–3 days, or takes it from an MCD truck,” local resident Rajbala said. Buckets of water shown by multiple residents verified the claim that the water was not fit enough for drinking.

According to EJ Atlas, over 1500 waste pickers frequent the Ghazipur landfill and use it as a source of income. Many of them live in an area behind the Mulla Colony, and not very far away from the landfill itself. The proposed closure of this landfill risks the loss of livelihood for these waste pickers, which is the sole income source for many of them.

“We go up the mountain, sift the items that are reusable, pack it up in a bag and throw it down to elder folks,” a 14-year-old Shehanshah Maan told me.

Maan has been working as a waste-picker for many years now and is worried about the landfill closing up. Another waste-picker says that many of the young boys who work as waste-pickers are the only ones providing financial support to their families, which hail from extremely poor backgrounds.

The landfill casts a long, poisonous shadow over the surrounding areas of Mulla Colony and Ghazipur Dairy Farm. Many residents seem to have lost hope as the promise to eradicate the landfill has morphed into a mere election slogan. “We have been hearing promises from a long line of politicians and local administrators. While media persons also come around every week and give us assurances, not much changes. It is true that the height of the landfill is decreasing, but it is expanding horizontally,” Hussain adds.

A former corporator who wishes to remain unnamed tells me that the idea of eradicating it completely is absurd. “I tried, but I failed. I told Mr Gambhir the same thing,” he says, standing at the canal that separates the landfill from the Mulla colony. A small fire rises at one end of the mountain, emanating high smokes. “Oh, this happens every day. Fires like this are common for us,” the corporator adds, defeated by the 54 m high mountain of shame.

(Parts of this article have been sourced via EJ Atlas)