Several farmer groups on Monday staged protests at Food Corporation of India (FCI) offices and godowns across the country as part of the nation-wide protests against recently passed agricultural bills. Farmer 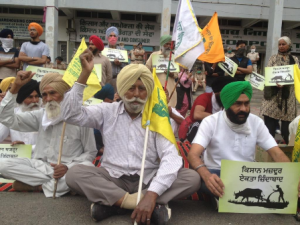 groups affiliated with the Samyukta Kisan Morcha, the collective body leading the farmer protests at Delhi borders since November 2020, celebrated the day as ‘FCI Bacho Divas’ (Save the FCI) and expressed their dissent against 3 agricultural laws passed in the parliament in September 2020. The protests were arranged to demand a remunerative minimum support price for their crops. As per the SKM, they also submitted a memorandum to the Union Minister for Consumer Affairs, Mr. Piyush Goyal, asking to strengthen the crop procurement system. Apart from a fair MSP, the farmers also demanded that the government provide an adequate budget to the FCI.

A statement by the SKM said, “While the farmers are concerned about the value of their crops, major procurement agencies, including FCI, are escaping from procurement.”

As the day commenced, visuals from several parts of the country poured in. Farmer groups could be seen protesting at FCI offices in the states of Punjab, Haryana, Rajasthan, Telangana, Uttar Pradesh, and more.

The main point of contention among farmer groups was a recent FCI order that made submission of land records a pre-requisite for online transfer of the minimum support price. Issued recently by an FCI zonal office, it read that for wheat procurement in the Rabi season 2021-22, farmers will have to submit their land records. Apart from withdrawing the above said ‘jamabandhi’ order, the groups raised demands for rolling back direct payments in their bank accounts.

The memorandum submitted to MCA read, “Purchase of crops should be done on a remunerative MSP and those buying under the MSP should be reprimanded.”

Farmers from Punjab and Haryana have been staging a protest at the Ghazipur, Tikri, and Singhu borders of Delhi under the banner of Samyukta Kisan Morcha. The protest has been running for 130 days and has led to the death of 351 farmers, the SKM says.

In a press conference organized last week, representatives of the SKM said that while support for the protests has been dwindling, they plan to intensify it. “We will also be organizing a march to the Parliament once the session starts in May,” one of the representatives said.