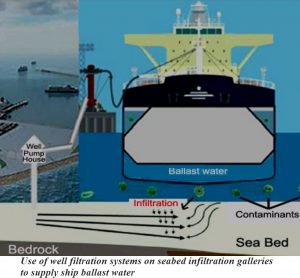 ships around the world if not controlled. Now a few innovative eco-friendly water treatment technologiesare developed by a team of Indo-US scientists. It is a non-destructive process involving the construction of well or seabed gallery intake systems for the production of ballast seawater which would be made available to the ships virtually across all the global port facilities to provide contamination free water. This new eco-friendly filtration technology would help to remove the invasive aquatic species from the ballast water economically for loading to the ships.

Fresh or salt waters that are used by a ship to ensure its stability are called ballast waters which are kept inside ballast tanks and cargo holds of a ship. The ships discharge these ballast waters at ports or other locations during a voyage as per the requirement for smooth sailing. Ships also fill up the ballast tanks when necessary for balancing in the rough sea. This process though essential for the safety of the ships is, however, threatening the marine ecosystems as undesirable macroscopic or microscopic bio-invasion takes place into the ballast water with eggs and larvae of fishes (called ichthyoplankton), bacteria or viruses etc. intruding into the ballast water which later gets released to another marine environment during the discharge where they take an invasive form in a new marine ecosystem which is not desirable for the other marine biota of that area. It happens due to the lack of well-developed filtration techniques.

One of the key features of this innovative water treatment technology developed by NIOT and NCCR scientists jointly with scientists from the United States is that it uses no chemicals. The process of filtration is non-destructive where well or seabed gallery intake systems are constructed for the production of ballast seawater which would be made available to the ships virtually across all the global port facilities to provide contamination free water.

It is estimated that there is a discharge of 3 to 5 billion tons of ballast water per year containing invasive species which has been harming the marine ecosystem throughout thelast century. Ballast water is considered as the primary vector responsible for the release and spread of invasive aquatic species with wide spread detrimental ecological and economic consequences to the aquatic ecosystem. Ballast waters typically contain a variety of biological materials that include bacteria, microbes, eggs, small invertebrates as well as cysts and larvae of various species. Once theyget released to the different parts of the world ocean system, they multiply and become invasive. They are also a major concern for creating various serious human health issues.

The authors of the current study predict that global marine traffic would be accounting for 80 per cent of the world trade by 2050, and if ballast water treatment remains uncontrolled, growth of invasive species will accelerate by 90 per cent worldwide.

With the liberalization of world trade, marine transport is becoming cost effective and a convenient mode of transport, prompting a worldwide demand for more container and cargo vessels. As a result, the demand for ballast water treatment systems is also anticipated to grow rapidly.

According to National Institute of Ocean Technology (NIOT) & National Center for Coastal Research (NCCR) scientists involved in the project, the system has been designed to meet requirements of the International Maritime Organization (IMO). IMO is the specialist agency of the United Nations (UN), which has implemented regulations to reduce risks to public health and the environment that result from the transfer of ballast water around the world. Many measures were being taken to resolve the issue over many years. But, until now, none of them was fully effective.

The authors of the present study suggested that priority invasive species in ballast water need to be controlled or eradicated, and measures to manage the pathway should be implemented to prevent their introduction. NIOT & NCCR team, in this new technology, established an effective and economical technical method to limit the risk of invasive species.