Phytoplankton can be rightly called as the lung of our planet because of their ability to remove almost half of the carbon dioxide.

Phytoplankton is the microscopic single-celled photosynthetic organism that drifts and blooms in the top layer of the world’s oceans forming a key part of the world ocean ecosystem. 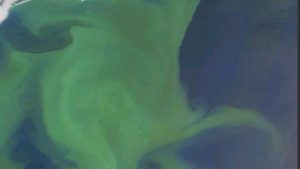 Global modeling studies using historical data have revealed the effect of global climate change in declining the global ocean phytoplankton that has been detected due to Upper Ocean warming and increased stratification. This is an alarming trend considering the fact that world ocean system is the major sink for carbon dioxide where phytoplankton plays an important role in absorbing the carbon dioxide. The reduction in phytoplankton population can reduce the amount of carbon dioxide drawn out of the atmosphere and that gets transferred to the deep ocean for long-term storage.

However, it has been observed by National Centre of Polar and Ocean Research (NCPOR) Senior Scientist Dr. Babula Jena and Dr. Anil Kumar, that there are unprecedented phytoplankton blooms in the Maud Risepolynya, Southern Ocean, with high concentration of ‘chlorophyll a’ during 2017.  The bloom appeared for the first time in the satellite record available since1978.

For the past 50 years, the loss of ice shelves and glacier retreat around the Antarctic Peninsula has increased. However, at the same time this resulted in the occurrence of open water surrounded by ice in Arctic and Antarctic, which are called as ice holes or polynyas.

These polynyas can enhance the ‘chlorophyll a’ concentration due to the increase in surface area of new open waters during the growth season of the phytoplankton in Southern Ocean.

‘Chlorophyll a’ is a specific form of chlorophyll used in oxygenic photosynthesis. It absorbs most energy from wavelengths of violet-blue and orange-red light. It also reflects green-yellow light, and as such contributes to the observed green colour of most plants.

The NCPOR study gives an indication that due to the increase in this ‘Chlorophyll a’ and appearance of phytoplankton blooms, we are going to witness a shift in the Southern Ocean colour in response to a warming climate condition. As a result of the changes with the blues getting greener, the changing colour of the oceans is also expected to play a profound role in overall climate change effects on our planet and their study would become increasingly important to understand the climate change and its impact on ocean ecosystem and biogeochemical cycle.

During the study, NCPOR scientists observed that due to maximum supply of nutrients into the upper ocean through Ekman upwelling (driven by wind stress curl and cyclonic ocean eddies) and due to improved light conditions in austral spring (October– November 2017), conditions became favourable for the phytoplankton photosynthesis and their growth. With similar conditions prevailing in the Southern Ocean polynya system, with access to sunlight and nutrients, phytoplankton can bloom in numbers of millions of cells per litre of seawater. The study suggests that the occurrence of phytoplankton bloom in Maud Risepolynya may turn it into a potential sink of atmospheric carbon dioxide through biological pumping and convert it into carbon and energy for the essential base of the marine food web. A portion of this would again circulate back to the surface because of ocean currents fueling another phytoplankton bloom cycle.

The NCPOR study demonstrated how the phytoplankton’s in the Southern Ocean would likely to respond under warm climatic conditions. Dr. Babula Jena believes that whatever is observed related to phytoplankton bloomsin 2017in the shallow bathymetric region of the Southern Oceans can be anticipated to happen again in a warming climatic condition in the future with continued melting of the Antarctic sea ice.

Led by Dr. Babula Jena, the scientific team comprised of Dr. Anil kumar N. Pillai of NCPOR, Goa. This study has been published in The Cryosphere Journal.(India Science Wire)

The Dragon Fly vs. Rama the Slayer