India’s prompt opening electric mobility for the masses will be a step not only to fulfil India’s global commitment but also cost-effective public mobility.

Electric vehicles (EV) industries are looking for opportunities to swap the petrol or diesel vehicles. The electric vehicle revolution is the next big thing in the auto industry. There is indeed a lot of scope for vehicle electrification in India as you must be aware that the Ministry of Transport has decided to skip Bharat Stage-5 and directly jump to Bharat Stage-6 by 2020.

The conventional IC engine powered vehicles will have its own limitations to meet the emission norms to BS-6. So, there is a great business case for making vehicles hybrid or fully electric. Vehicles with internal combustion (IC) engine cause half of the pollution in the cities as they emit harmful gases like carbon monoxide, nitrogen oxides, sulphur dioxide, hydrocarbons etc., on the other hand, Electric Vehicles are 100 per cent environment friendly as they do not emit toxic gases or smoke in the environment which leads to global warming.

Pollution is rising every year, global warming is the biggest fear for the earth, and this is very harmful to our future generations. India has committed to cutting its Greenhouse Gas emissions intensity by 33 per cent to 35 per cent below 2005 levels by 2030.

Today, the top-most populated 14 cities from the world belong to India. Two wheelers are massive contributors to environmental pollution. They emit nearly 32 percent of air pollutants in the environment. In the Indian two-wheeler market, very few Indian companies are making E-Vehicles in India, except Bajaj and Hero.

What Is the Governments’ Plan?

The combination of rising fuel prices, depletion of fossil fuels and increasing carbon dioxide pollution presents challenges to economies across the globe; India is no exception. India, the world’s fifth-largest auto market is readying for a transformation: moving completely towards electric vehicles by 2030. This is part of the government’s vision to help a renewable-energy revolution in the country. It will obviously require the united efforts of the administration, the private sector and the general public.

As per NITI Aayog’s report, the policy think tank of the Government of India proposed to implement few policies on to support EV industries.

Those policies are: Providing charging stations; Increasing efficiency of vehicles; Make in India; Focus on small and public vehicles to make an early impact; Research and development technology watch; Focus on the power-electronics Industry and electricity distribution system; Impact of EVs on economic growth and employment; Last-mile connectivity and rural transport

Now the concern is how our government will take steps to make pollution-free future.

What Major Companies Are Doing in EV’s Research &Development? 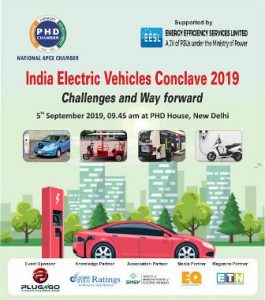 Recently, Bajaj introduced their first e-scooter, Chetak, along with their vintage slogan Hamara Bajaj and the company will commercially launch it most probably in January 2020. Companies like Hero, Okinawa, Ather, Revolt have already launched their e-Vehicles in two-wheelers segment but did not gain much popularity in the market.

Companies like Ashok Leyland, Tesla Motors, Ola, Mahindra, Hyundai, Honda, Toyota Tata motors are already working on it and their target is to bring all cars on road by 2025–2030.Honda India has important cars lined-up for 2020 including the new Honda City and the updated Jazz. Both these cars will offer hybrid powertrains globally. However, since the Indian government incentivizes only electric vehicles (EVs) and not hybrids, the Japanese carmaker wants to add an EV to its line up here. It is unclear what the vehicle will be or when it will arrive, but we do know from a Honda R&D engineer that the pretty little Honda e-hatchback is on the probable’s list. As like Honda, Hyundai also introduced its EV in the market called KONA EV to participate in the upcoming automobile revolution.

The big concern for the people is that there is no infrastructure for electric vehicles, then how they can charge and where would they charge their vehicle in remote and rural areas. Recently, researchers at Pennsylvania State University (US) have developed a lithium-ion battery that could charge electric vehicles (EV) within 10 minutes. Electric vehicle currently takes more than 1 hour or even 2 hours to reach full charge. Pennsylvania State University Professor Chao-Yang Wang said: ‘If we have a ubiquitous fast-charging infrastructure on the roadside, drivers need no longer worry about the cruise range. After driving 200–300 miles per charge, one can pick up another 200–300 miles by charging for 10 minutes’. Wang added: ‘In addition to fast charging, this design allows us to limit the battery’s exposure time to the elevated charge temperature, thus generating a very long cycle life.

The government need to promote infrastructure, charging stations so that the scenario comes under control. Tech Parks, public bus depots and multiplexes are some of the potential places to install charging stations.

We could compensate cleaner vehicles through reduced registration charges, or even aim for mandating EVs for taxis and selected (urban) public transport vehicles. These are often diesel, and thus far worse polluters.

Operationalizing the mass transition to electric mobility for a country of 1.3 billion people is not an easy feat. Thus, a strong common vision, an objective framework for comparing the state policies and a platform for public–private collaboration are needed. These levers will allow leaders to show clear action to our future generations.

The writer is a freelance journalist based in Kolkata. He can be reached on twitter
@sharmahar1

Captain Kohli at 31: From Delhi Under-15 to Leading the Indian Team