Providing safe platforms and hearing their voices are a necessity for developing India’s youth.

While the COVID-19 pandemic affected a plethora of communities in the last year, it was, perhaps, the lonely, stuck at home adolescents that bore a major brunt of it. Being cut off from access to education, 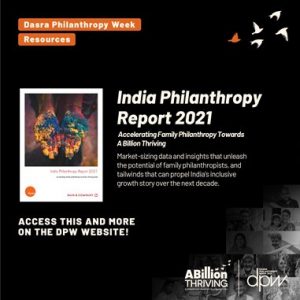 peer to peer support groups, and dwindling in an increased digital divide, young people from the more vulnerable walks of life had to battle through a tough few months. It was for this reason and more that Dasra, a philanthropy foundation based in India, hosted a seminar with several partner organizations on development of youth, as part of the Dasra Philanthropy Week, 2021.

As part of its 10to19 adolescent collaborative program, Dasra has worked with civil society organizations, government stakeholders, philanthropists, and academic experts to empower the youth in ways where it can discover its own potential, and engage in discussions about development.

Titled ‘Leveraging the Dividend: The Power of Youth Participation in India,’ the seminar hosted speakers from multiple NGOs, the government of India, and the corporate sector. The overarching theme across the panel was of inclusion, increased participation, and creating safe spaces for adolescents. Priyaswara Bharti, Founder, Bihar Youth for Child Rights kicked off the seminar by elaborating on the need to make the youth aware of its rights. “I started the organization because I came to know that many adolescents are unaware of their rights. They have low participation rates in the decision making programs that eventually affect them, and hence it is important that no decision is made without us,” she said while adding that if young people are given the opportunity to engage and raise their voice, the ecosystem will have a better idea to serve their needs. She also stressed on the importance of including adolescents from all walks of life: underprivileged, uneducated, minority, differently-abled, LGBTQ, and marginalized communities.

Including a large majority (2 crore) of India’s orphans in the conversation, Supreme Court advocate Poulomi Shukla said, “Less than 1 lakh of these children are covered under government schemes, and the orphaned community, as a whole, is not even covered under the Right to Education.” She added that orphans deserve the same kind of treatment, same kind of nurturing, and the same kind of attention.

The health of young females and their increased marginalization was also a focal point, as many speakers reflected on the factors behind them. As per Dasra’s own survey, a number of NGOs connected with the network had a dangerously high number of girls approach them in cases of forced child marriages. “7 out of 10 girls in this country are anaemic, and face a lot of issues with health and hygiene in terms of menstruation,” said Dr. Girish Mane, Chairperson, Adolescent Health Committee. He further commented, “Girls face issues because of infections, poor food habits, and not having adequate facilities in comparison to boys.”

The speakers also discussed at length about the importance of providing youth with platforms for them to engage in conversations. Farid Ehsan, COO of the popular social media application Moj, which rose as an alternative to the banned Chinese application Tik Tok, said that their platform was able to connect youths from different states. “About 80 per cent of our user base is aged below 25. Collaborations between adolescents from different states take place very often, and are able to garner an audience with ease; something that is difficult for them to do on other elite platforms like YouTube or Twitter.” Speaking on a similar note, Yuvaa founder Gaurav Taneja stressed on providing a safe and non-judgmental space to adolescents for them to speak freely.

While commenting on the role that media can play to empower young people, Prabhat Khabar’s Sanjay Mishra elaborated on their ‘Barefoot Journalist’ program, which takes the help of young women from villages to garner stories about Jharkhand through sakhi mandals. “We have been continuously covering issues of teen pregnancy and youth underdevelopment in Jharkhand because it is a black spot on the state. This program has helped us draw out stories from anganwadis, ration supply, facilities for children in schools, etc,” he said.

Speaking on how the central government has worked to accommodate youth voices, Additional Director of the Ministry of Health and Family Welfare, Dr. Sumita Ghosh, said, “We have top-tier programs in the ministry to look into various health aspects of adolescents and their specific needs, including education, awareness of health & hygiene, anemia, menstrual hygiene, etc. We also have adolescent friendly health clinics and 4.6 lakh sathiyas (peer-to-peer educators) across the country, with 4 (2 boys, 2 girls) designated to every village.”

Enabling the participation of youth, being the central theme of the conversation, was stressed on by a number of panelists. Finding non-traditional methods of engagement, building a proactive relationship between an adult and a youth, encouraging them to tell their own stories, and having trust in them, were some of the suggestions made.