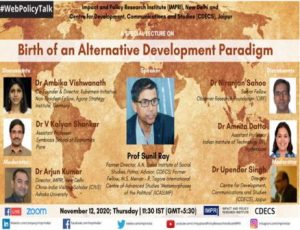 unfolds as a new epistemology out of resistance movements and other radical transformative initiatives like globalisation and socio-economic system and institutions, which create and co-create unequal distribution of power and perpetuate discrimination and domination by humans over others as well as over nature.

The Keynesian package that was first provided to withstand the onslaught of the Great Depression of the 1930s cannot be applied for every economic crisis. Since it has been repeatedly been resorted to, the global economy has shrunk- thereby aggravating the crisis. Added to this is thecommodification of nature, which ultimately leads to the decline in production conditions.

The contradictions of capitalism have enormous social costs. Human misery is aggravated and is imminent through socio-economic inequalities, deprivation, loss of employment and income, loss of control over assets and resourcesand, importantly, loss of social cohesion. Essentially, the costs of contradictions of capital system are being borne by the people, especially those in the lower rungs of the society.

According to Prof Sunil Ray, Former Director, AN Sinha Institute of Social Studies, Patna, individualism, private property and a representative democracy, that lend credibility to the mainstream development paradigm, are actually rooted in the same capital system. These are increasingly proving to be the enemies of civilisation. Therefore, anti-systemic movements and the radical transformative movements around the world have embraced a clash against the mainstreamdevelopment paradigmin an effort to aid in the escape of the humanity froman impendingcatastrophic through the creation of another world. It is important to point out that these movements are expressed globalisation, environmental degradation, racial discrimination, and gender discrimination— in essence, the exploitative systems. Examples of such movements include: the Anti-globalisation Movement organised by ATTAC that initiated the first World Social Forum in the Porto Allegre in 2001, the Global Justice Movement that counter-poses an alternative conception of welfare and development vis-à-vis the ones advanced by the International Monetary Fund (IMF)and World Trade Organisation (WTO), the Zapatistas in Chipas, Mexico attempted to bring about holistic transformation for sustainable agriculture, which would have water, energy, food sovereignty for all. They sought reconstruction of the state as an institution from the grassroots.

These are not only resistance movements against globalisation and the exploitative systemic order, but also have different cosmovision that provides alternative development epistemology.

Several other countries of Latin America joined these countriessubsequently to crush the hegemonic impact of the mainstream development paradigm on developmentalism by their pragmatic understanding with holistic ‘cosmovision’ that transcends modernist met narratives of both capitalism and socialism.

The Zapatista Movement provides lessons to build diversity and heterogeneity by rejecting the homogenisation principle of the mainstream development paradigm based on which the main market model of globalisation is built. Another lesson that can be learnt is to imbibe the concept of well-being as it promotes co-evolution of human beings and the nature, which does not consider economicgrowthas the means of development. Therefore, the commodification of nature should be replaced by the principle of sufficiency to attain economic development, which would emergeas the basic tenet of the alternative development paradigm. This never allows natural resources to be exhausted beyond the limit. It is only within this framework that one may have reasons to argue why sustainable development is realisable. Economic development is sustained not on the basis of the notion of unlimited quantitative growth. Qualitative growth that includes social, ecological and spiritual dimensions is equally important to be associated with development.

Such transformations have the potential to give rise to the process of ‘Cohesive Development’. It is a social cohesion among individuals with a sense of community and commitment for collective understanding and shared consciousness. The latter binds individuals together despite differences that might exist between them. It refuses tofall in line with the power structures that are undemocratic, exploitative and discriminatory, as they lead to powerlessness and deprivation. Further, it enshrines the principle of reciprocal altruism, and rejects self-interest maximisation and individualism, as the core axiomatic truth of human behaviour. Reciprocal altruism fosters integration between humans on the one hand and, between humans and nature on the other, resting on the principle of solidarity between them. 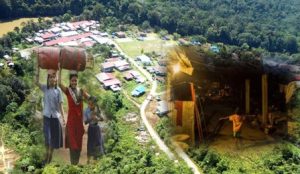 According to Prof Ray, the principle of sufficiency can be further complemented by four other epistemological tenets in the transformative mode of production “the new logic of capital; a culture of cooperation, new organisational forms and expansion of commons; reciprocal altruism, and; qualitative metamorphosis. He added that the inexorable forces of history would witness how this incongruous evolutionary process is rectified by cohesive development, the process which he termed as the alternative development paradigm in the 21st century.

Dr Amrita Datta, Assistant Professor, Indian Institute of Technology, Hyderabad, based her discussion on the conceptual framework of the economics of solidarity, and pointed out to several empirical tensions that we are witnessing today amid the COVID-19 pandemic, the capital and labour ought to be a catalyst for the economics of solidarity, but in reality, there is the domination of former over the latter. For instance, she said, “we have a situation where national economies are shrinking globally and at the same time, we have a company like Amazon which tripled its profits from USD billion to USD 6.3 billion dollars in the third quarter of 2020. On the other hand, International Labour Organisation (ILO) reported that the world of work is being profoundly affected by the pandemic, and that there is economic and social disruption not only in low-income countries but also in middle-income countries.

According to her, despite an economic crisis and consolidation of capital during the period of pandemic, altruism, goodwill and solidarity at the individual level have seen to be intensified.

She also underscored that by allowing the market mechanism to be the sole director of fate could lead to the demolition of society. When we talk of contemporary capitalism, both the welfare state and prosperity emerged from a certain kind of capitalism. There were the post-war golden years of capitalism where both the market and the state were very strong, and this is very different from the present paradigm of neoliberal economic development where the state has abdicated its welfare function.

Dr Niranjan Sahoo, Senior Fellow, Observer Research Foundation, echoed Prof Ray’s vision and remarked that there were a lot of problems with representing the democratic model especially with the capitalistic order that has a kind of plutocratic influence. This requires an urgent change. Since the last two centuries, representative democratic systems have not witnessed any alternate paradigms, though there have been some small-scale NGO-driven alternatives. Further, there is not much empirical evidence to suggest whether these could be scaled. Highlighting the solidarity movement, Dr Sahoo mentioned that in the prevailing times, there appears to be a strong pushback against community-driven initiatives. NGOs and civil societies that had flourished in the previous three decades are faced with a major backlash, mostly directed by the states and a powerful capitalistic system.

Dr Ambika Vishwanath, Co-founder and Director of Kubernein Initiative and a non-resident fellow at Agora Strategy Institute of Germany, focused on the concept of cohesive development on aspects of water security, and also on the finance and delivery systems. In the process of looking at both these aspects, there has been a linear way of thinking. For instance, in terms of water, the circular thinking about its use and implications on the environment are now coming into the foray. Similarly, the finance and delivery systems are being observed from a much larger perspective, that is, incorporation of all the actors—the source to the end-user and back. These have enormous relevance when we brainstorm on the ways to achieve water security or environment security either in any setting- local or national or global.  Dr Vishwanath reiterated on the need to create a change in the role of the state itself by considering it in the list of top security challenges and not relegate it to the sphere of non-traditional security challenges. For this, it is important for the government and governance structures, non-governmental actors, the private sectors, the innovators, the thinkers and other stakeholders to come together to make this movement from linear thinking to non-linear thinking.

(Note: This article is based on the lecture by Prof Sunil Ray, Former Director, AN Sinha Institute of Social Studies, Patna, at the webinar jointly organised by Impact and Policy Research Institute (IMPRI), New Delhi and Centre for Development Communication and Studies (CDECS), Jaipur on 12 November 2020)