Recent successes of Bangladesh agriculture sector are remarkable, but if we want to sustain it for long run, we need to give emphasise on science communication and effective dissemination strategies for our innovations that follows by the developed world.

From time immemorial, agriculture has been playing a crucial role in the economy of this part of the world. The importance of agriculture comes to the forefront every time there is a 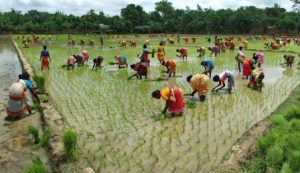 major disaster or a crisis like a massive cyclone or a prolonged flood or a pandemic. Take the COVID-19 for example, that has shaken up the entire world, shutting down entire economies, stopping cash flows, robbing entire communities of their livelihoods on a massive global scale. In many countries, this has triggered quick escalation of poverty and hunger. But in Bangladesh, agriculture emerged as a true savior. Despite the economic meltdown, the agriculture sector performed wonderfully well. Bumper paddy harvests during the Boro season earlier this year at the peak of the pandemic shutdown and now the ongoing Aman harvest has ensured that Bangladesh will not be facing any food crisis in the foreseeable future. However, despite agriculture being such an important lifesaving sector of the economy, the study of agriculture has never enjoyed the ‘glamor’ that some of the other science disciplines like medicine,engineering, physics, chemistry, biology, mathematics, economics, and computer science have.

At the secondary and higher secondary levels, agriculture is always the ‘fourth subject’, meaning it’s completely optional for students. In fact, many science students choose agriculture as their fourth subject only because they think it is easy, and hence they can score good grades.  It’s also really hard to understand why agriculture should still be labelled as an ‘easy’ science. Before enrolling in an agricultural university,I didn’t have any idea what agricultural science in undergrad level really encompassed. I realized that only after I started reading agriculture at the undergrad level and it was right up there with all the sciences in terms of sophistication. Because everyone thinks agriculture is mostly the profession of ‘uneducated’, ‘uncultured’ peasants, so how difficult it could be! But as I navigated through the curriculum at the undergrad and graduate level, I discovered, much to my awe, that even the first-year curriculum at the agricultural university included scientific disciplines such as genetics& plant breeding,two types of chemistry like-biochemistry and agri-chemistry, soil science, botany, horticulture, agri-engineering, statistics, economics and so on. These do not sound much ”easy’ subject, do they?

Broadly speaking, the science subjects can be classified as basic science, which depicts scientific knowledge and focuses on the study of the natural world, and applied sciences, which is mostly about application of the theories. A third type is the social sciences that focus on a methodical study of human behavior and the social dynamics.

Agriculture is unique in the sense that it combines all the three sciences – basic, applied and social.

The study of agriculture is as much about social dynamics as much as it is about theoretical and applied sciences. It takes intricate scientific knowledge to develop a new kind of variety, for example, using genetic engineering. Using this knowledge, a rice breeder can switch on and off a certain trait in a rice plant to make it more tolerant to salinity, submergence or drought. The breeder can also import a certain gene from another plant (example- Golden Rice, in which a gene from yellow maize was transferred to rice so that it could produce beta-carotene naturally in the grain that gets converted to vitamin A in the human body after consumption) and make the rice more nutritious. The same technologies (known as bio-technology) are widely applied in all kinds of plants and crops all over the world. So, when a breeder makes a plant salinity or submergence tolerant, they also need to have the knowledge which are the regions where salinity or submergence is high and what kind of rice they consume. Richer people tend to prefer finer varieties, while poorer communities choose coarser varieties. Some regions prefer sticky rice because it goes well with their food habits, while others prefer their rice nice and loose. 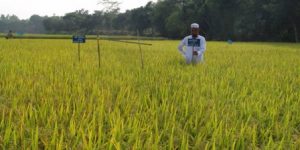 Based on above scenarios if we think about scientific knowledge dissemination, the gap between agricultural researchers and farmer is critical in this regard in Bangladesh. Usually, our farmers are mostly self-educated. They are always jittery at first to adopt new crops, varieties and technologies due to a lack of knowledge and also awareness. These barriers often prevent farmers from adopting new practices or an innovative technology. I do believe that educating them about the science behind the technology to eradicate the fear of new in their minds could be one of the best ways of promoting new technology. So, after finishing my university education, I decided to choose a slightly different career path than most of my peers-promoting agriculture by highlighting the science to key target audiences, i.e., farmers. And now, I like to call myself a science communicator.

When I was a second-year student at the university, I started working as a part-time journalist for a popular national daily. My role was to write on everything new that was happening at the university – new researches, new technologies, new innovations, and so on. After graduating, I became a freelance writer with a special focus on agriculture.

In Bangladesh, the agricultural research institutions like BRRI, BARI, BINA and all universities work relentlessly to develop new varieties or technologies every day but not much of these are adopted by the farmers at the field level.

As a science communicator, I believe that the purpose of science remains incomplete if the community, for whom the scientific knowledge has been produced, doesn’t adopt that the scientific discoveries. While scientific investigation and discovery are essential for systems to function, the tangible benefits from our knowledge stem from their application to solve real life problems. So, clear communication is crucial for successfully helping stakeholders (farmers and policymakers being the two most important) understand the importance of science and also help scientists understand the challenges that stakeholders face.

The media can play a very crucial role in helping science communicators disseminate knowledge about technology. For reporting on cutting edge technology, a journalist doesn’t have to be a scientist themselves. Especially, when it comes to agriculture, because discoveries made my agricultural scientists always have a socioeconomic aspect. A journalist only needs to spot the socioeconomic angle and if they can do that, more often than not, they’d have a ‘lead story’ in their hands. All they need to do is highlight the role that science played in solving that particular socioeconomic problem.

Our Honorable Agriculture Minister, Dr. Abdur Razzaque, MP often says ‘Scientists are beyond borders. Therefore, they should be very proficient in communication.’ Keeping this mind, it is high time for usto realize all the complex social and political dynamics of the 21st century. In this century much of the success and reach of innovations depends on how well it does communicate. Recent successes of Bangladesh agriculture sector are remarkable, but if we want to sustain it for long run, we need to give emphasise on science communication and effective dissemination strategies for our innovations that follows by the developed world.  Otherwise, our efforts will be lost in oblivion in the technologically clutter of the era.