Bangladesh has a good volume of fine and premium quality aromatic rice which can be exported after ensuring national demand. 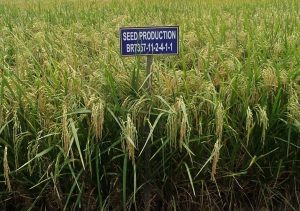 and rituals from time immemorial. Farmers have been cultivating fragrant rice in the corner of their land or a part of it. The purpose is to serve various delicacies including pulao, biryani, kachchi, firni, pitha–puli made of fragrant rice to entertain the guests in various events including religious festivities like Eid and Puja. In addition, aromatic rice dishes have become a commercial staple in any festival or hotel/restaurant’s set menu.

Bangladesh now has a good volume of fine and premium quality aromatic rice which can be exported after ensuring national demand. Last year, BRRI has sent some samples of premium quality aromatic rice verities, that is, BRRI dhan34 and BRRI dhan50 to the diplomats in Dhaka and also to the United Arab Emirates as a gift. Afterwards, the demand for fragrant rice has increased abroad; it is high mainly in the countries where South Asians live. In addition, the demand for fragrant rice has recently increased among the natives of Europe and America. Aromatic rice is now very popular for fast food and various Chinese dishes. Most of the fragrant rice is exported from Bangladesh to Middle Eastern countries. Especially Europe and America have a huge demand for Bangladeshi aromatic rice.

Some corporate companies of Bangladesh are so far exporting packaged fragrant rice to 137 countries. The list includes various companies including Pran, ACI, Ispahani, Square, etc. They are also selling fragrant rice of different brands in the country. According to the data of some concerned organizations, the export of fragrant rice has been increasing continuously for 10 years. The amount of aromatic rice exported through various private companies is about 10–15 thousand tons every year. Besides, about 5–10 thousand tons of aromatic rice goes abroad through expatriate Bangladeshis working in different countries.

Due to the lack of awareness and promotions about the quality of the local aromatic rice, the use of foreign aromatic rice instead of our variants are seen in the reputed hotels and restaurants.

The weather of Bangladesh is very suitable for the cultivation of aromatic rice. However, rice is more aromatic in cold-prone areas. Aromatic rice is being cultivated commercially especially in Dinajpur, Thakurgaon, Panchagarh, Rangpur, Naogaon, Rajshahi, and Mymensingh districts. There are many regional aromatic rice varieties in Bangladesh. BRRI’ss research has shown that at one time about 57 types of aromatic varieties were cultivated in Bangladesh; now more or less 32 types of aromatic varieties are cultivated. Among these, the most aromatic varieties are Kalijira, Chinigura, Kataribhog, Tulsimala, Badshabhog, Khaskhani, Chini Atap, Bashful, Durbashail, Begunbichi, Kal Pakhari, etc. Krishnabhog, Govindabhog, Punia, Kamini, Jirabhog, Chinishail, Sadagura, Madhumadhab, and Dudhshail are notable among the lightly aromatic varieties. Besides, farmers still cultivate Tepi Boro, Rata Boro, and Lafa during the Boro season and Katari Vhog, Ranisalut, and Radhunipagal varieties during the Aman season. Most of these conventional varieties yield much less per bigha.

Therefore, the scientists of Bangladesh Rice Research Institute are researching to develop new high-yielding varieties. BRRI has so far developed a total of 8 varieties of fine and aromatic rice. These are BR5 (Dulabhog), BRRI dhan34, BRRI dhan37, BRRI dhan38, BRRI dhan70, BRRI dhan75, BRRI dhan80, BRRI dhan90, and BRRI dhan50, which is suitable for cultivation in the Boro season, also known as Banglamati. BRRI scientists have changed the concept of aromatic rice yield. Earlier the yield of conventional varieties was 5–8 maunds per bigha, now the yield per bigha of rice is 12–22 maunds. In addition, the research for developing high-yielding and anthocyanins and anti-oxidants enriched rice by pure line selection of locally popular aromatic rice is going on in full swing at BRRI.

BRRI dhan34 is similar to Chinigura or Kalijira but the yield is almost double. The farmers are thus more interested to cultivate this rice variety. About 80% of the Chinigura rice available in the market is BRRI dhan34. Due to its light sensitivity, this variety is suitable for planting in flood-prone areas. BRRI dhan80 is similar to Kataribhog, and its average yield per bigha is about 17 maunds, which is twice as much as Kataribhog. Also, it is slightly longer than Kataribhog. BRRI dhan80 is light insensitive, has an average yield of about 18 maunds per bigha, and is as fragrant as the popular Thai variety Jasmine rice and delicious to eat. On the other hand, in the Boro season, the fragrant modern variety BRRI dhan50 or Banglamati is a popular choice. The yield of this rice is about 20 maunds per bigha. The profit is higher as the price is much higher than the different varieties of rice prevalent in the market. The quality, taste, and aroma of this variety of rice are similar to that of Basmati rice. Day-by-day, Banglamati rice is replacing imported Basmati rice.

Proper management must be developed to ensure fair price of aromatic rice and the quality and nutritional value of aromatic rice of Bengal should be spread from country to country through wide publicity and promotions. The lost tradition of aromatic rice will come back only if we can reduce the dependence on foreign varieties of rice and encourage new attractive dishes made of local aromatic rice including Banglamati. This will enable the farmers to play a role in the progress of the country as well as getting benefitted financially.