Indigenous Youth in Bangladesh: Hope in the Times of COVID-19

Given the role that indigenous youth play in community conservation, food security, and local economies, the government must ensure that their voices are heard.

Indigenous people in Bangladesh are bearing the brunt of the COVID-19 pandemic and are facing food shortages, loss of livelihoods, unemployment, and limited access to healthcare services. 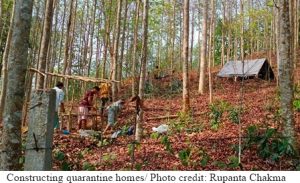 The indigenous community in the Chittagong Hill Tracts (CHT) in southeast Bangladesh is becoming even more vulnerable to the crisis. CHT is situated in the South-Eastern part of Bangladesh. This hilly region covers one-tenth of the total land area of the country. Apart from mainstream population there live 13 indigenous groups for centuries. This is one of the indigenous inhabited regions of the country. Despite the COVID-19, there is hope, however, brought by the area’s youth, who are determined to create solutions to mitigate the impact of the crisis.

The first COVID-19 positive case in Bangladesh was identified in early March. The government then started disseminating information briefs about the pandemic, but unfortunately, many members of the indigenous community in CHT could not access them due to language barriers. Many of them still do not understand mainstream Bangla language other than their respective indigenous languages. In this context, some youth organisations in CHT, like the Tripura Student Forum (TSF), Bangladesh Marma Students Council (BMSC), Unmesh – a voluntary blood donation organisation of youth, voluntarily conducted awareness-raising programmes in local languages to help people living in remote villages understand the pandemic better and learn precautionary measures. Some of these young volunteers also dedicated themselves to help out with protective measures, such as spraying disinfectants on vehicles entering the district.

In the CHT, many indigenous communities still practice Jum, or the traditional slash and burn cultivation.

Also Read : Violent Conflict in the Countryside: Case of the Philippines

April to July usually used to be the ideal time for farmers to work in the field. However, it has now become difficult due to the pandemic. Moreover, after a few weeks of government declaring countrywide shutdown, it was reported that poor families in remote villages in CHT were experiencing food scarcity. Normally they would resort to foraging food like wild potatoes, bananas and many others but the pandemic has now made it difficult to move around. 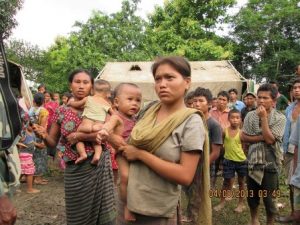 Local indigenous youth immediately took the initiative to raise funds through creative means. A group of youth called the “Bonophooler Jonno Jummo Tarunnyer Valobasa” (Love for the hill flowers) created a Facebook page, which they used to share updates of the COVID-19 situation and their relief works. Every week the group would organise streaming live music sessions to attract donations. Many indigenous young artists and photographers would also sell their artworks and photographs for fundraising purposes. Within a short period, about 500,000 Takawas were successfully collected through this indigenous youth-led endeavour. Almost 600 poor indigenous families in different districts in the CHT have now received help from this youth organisation.

Following the countrywide shutdown and closure of businesses, indigenous peoples who have jobs in urban areas started returning to their respective villages from the city. It is estimated that around 50,000 indigenous migrant workers from the CHT work in different cities, mainly in the garment industry. It is believed that almost half of them returned home due to pandemic. These factory workers, who were mostly young, have now become unemployed.

Young people were the ones who helped community elders to maintain the traditional practice of isolation by barricading the entrance of the villages using a traditional fence. By doing so, the youth adapted their indigenous traditions to mitigate the crisis, which will be passed on to future generations.

Despite these encouraging acts done by the youth, the situation of indigenous people in the hills remains critical. For the time being, the youth are serving the community, but there has to be concrete actions that would best serve the interests of the people. In the long run, the government must acknowledge and protect the rights of indigenous people to food security, healthcare services, entrepreneurship development, and support in agriculture.

Meaningful engagement of indigenous peoples’ representatives in all COVID-19 response programmes of the government is also important to accommodate their special needs. At the same time, young people should be given equal opportunity to employment for they are the future of our society. Given the role that indigenous youth play in community conservation, food security, and local economies, the government must ensure that their voices are heard.

The writer is the Executive Director of Kapaeeng Foundation (KF). KF is a member of International Land Coalition (ILC). He can be reached on twitter @Pallab_juju