Fellowship Call: At the intersection of Science and Media

Five selected journalists will be provided with a grant of Rs. 1 lakh each and are required to work on minimum five stories during the course of the ‘Indian Science Media Fellowships 2019’. 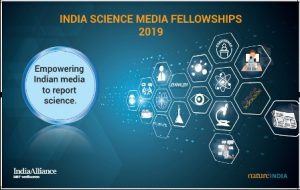 To mainstream science reporting in Indian media and to have scientists in various capacities in biomedical research closely engaging with science journalists, the ‘Indian Science Media Fellowships 2019’ has been launched. The six-month fellowship would select five journalists with basic grounding in science journalism from across India.

“As a journalist, I have seen various kinds of fellowships but there is none at the intersection of science and journalism at least in this country. So, when I began, I didn’t have the means to go out and explore on my own, to travel and figure out science stories. So, that is the felt need from a very personal perspective as well,” Subhra Priyadarshini, Chief Editor, Nature India told Delhi Post at the formal launch of the fellowship.

The journalists will be provided with a grant of Rs. 1 lakh each and are required to work on minimum five stories (any medium) during the course of the off-site fellowship.

At the launch at Ministry of Earth Sciences, New Delhi, Prof. K. VijayRaghavan, Principal Scientific Adviser to the Government of India said that research in India is not restricted to just funding it, but also covers public engagement and science communication for which quality science journalism was a “felt need”.

“Over the decades, there has been a strange situation in India. While the expertise in research is growing due to funding and infrastructure, there is very less information out in the public domain,” said Prof. K. VijayRaghavan.

He added, “The criticism is that the economy is not connected enough with science and technology. That is where communication issue can be bridged by empowering Indian media to report on science.”

Also read: Towards Building a Research Ecosystem in India

The fellowship has been funded by Wellcome Trust DBT India Alliance, a public charity funded by the Department of Biotechnology, Govt. of India and Wellcome Trust, UK which aim to build a strong biomedical research ecosystem in India, in partnership with an India-focused online publication of Nature Research, Nature India that reports on scientific and medical research.

“India Alliance does a lot of work around empowering scientists by training them to become better communicators. We also do a lot of activities that aim to bridge the gap between science and society. This was felt as a natural move ahead where we felt that there is very little conversation between scientists and journalists,” Sarah Iqbal, Lead, Science Communication and Public Engagement from Wellcome Trust/DBT India Alliance told Delhi Post adding that often journalists don’t get “access to science stories” and scientists don’t understand what is “newsy”.

The stories covering  life sciences, biomedicine, application-based or basic biological research, and health from the selected fellows will be copyrighted by Nature India and Wellcome Trust DBT India Alliance and will also be published by the journalists’ respective media houses.

“We need to involve them (scientists and journalists) both. At least, take what the scientists are doing to the public because their money is being used to do the studies and research. This fellowship aims to focus on the process more than result-oriented stories,” Iqbal further said emphasising on “responsible and good quality” stories.

“A panel discussion on ‘Science in the Indian media: The unfinished agenda’ was also held during the launch.”

“Media houses find that they can’t hire science journalists but are reasonably, full of science stories through national research reports. The gap has to be filled and fellowships are really important to give such a space,” said Gupta.

The panel also recognised the often highlighted low levels of interest evinced by publishers, the demand for information on science and technology developments, and returns through science reporting as a career as challenges that need concerted action.