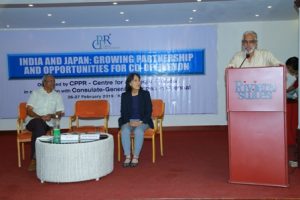 Discussing the economic imperatives and security challenges among other things for the India-Japan partnership was a two-day International Conference on ‘India and Japan: Growing Partnership and Opportunities for Cooperation’.

Hosted by Centre for Public Policy Research, Kochi Kerala’s Centre for Strategic Studies in collaboration with the Consulate-General of Japan in Chennai, the discussions focused on the role of India and Japan maritime cooperation, the naval hegemony of the Chinese, success of ‘Abenomics’, Asia-Pacific as a continental construct and Indo-Pacific as a maritime construct and the switch from one terminology to the other and new regionalism and its connotations, corridors and consequences.

It also emphasised on how Japan emerged as largest aid donor and third largest FDI provider and whether it meant an opportunity for India especially in view of changing demographics of Japan. The discussions also flowed towards the causal factors for transformation of the Asia-Pacific in the last few decades.

The presentations by the speakers focused on five thematic areas of Asia-Pacific and its grand transformation, the paradigm of new regionalism (which is different from traditional geopolitical setting in essence as it is characterised by flexible and adaptive network of countries based on formal and informal frameworks) building synergies in the global platform through India-Japan partnership, maritime transformation of Asia-Pacific and India Japan partnership in the information age, trade and investment.

The conference was attended by notable dignitaries from academia, think tanks, and students of IR studies.

In his keynote address, Prof Kanti Prasad Bajpai, noted scholar and Wilmar Professor of Asian Studies, Lee Kuan Yew School of Public Policy, National University of Singapore, pointed to the converging interests of India and Japan and analysed the strategic choices in front of them in the context of China’s rise and the US’ erratic behaviour. He also highlighted soft balancing against China through India-Japan partnership, as the most viable strategy for both countries in the foreseeable future.

However, speakers also pointed out that it remains to be seen how China would react to development assistance to Arunachal Pradesh, centre of territorial conflicts.

Hiroko Taniguchi, Deputy Consul-General of Japan in Chennai in her address said, “Strong India Japan relation is a global common good because they share common values of commitment to democracy, openness and rule of law”.

Also read: The Manufacturing story: Why India is falling behind China

Around 80 participants and 15 speakers took part in the conference where economic and security implications of Asia Pacific transformation, India-Japan maritime visions in Asia Pacific, India-Japan Partnership in information age, trade and investment etc were the key topics of discussion.

Dr. D Dhanuraj, Chairman, CPPR said, “The conference reiterates the significance of the growing partnership between the most prosperous democracy (Japan) and the biggest democracy (India).”

Edgar Morris, recipient of one of Japan’s highest civilian honours, Order of the Rising Sun (Gold and Silver Rays) with the Emperor’s Medal of Honour was felicitated by the Deputy Consul General.

Fellowship Call: At the intersection of Science and Media