The feminist media industry needs to be encouraged to produce gender-transformative content and to develop self-regulatory equality policies, including access to decision-making positions thereby creating gender equality in content, workplace and management.

Media play a huge role in shaping the perception of ourselves and of the world we inhabit. Hence, it is of critical importance that we are concerned ourselves with media messages and how 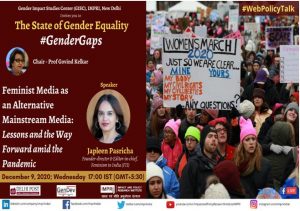 they impact our thinking and perspective of the world. Women have been using media to mobile mass campaigns and movements for social justice. They transport their messages through different mediums to disrupt social orders and spin novel social processes. Feminists have long recognised the importance of self-managed, alternative media, and hence increasingly media production is being managed by women. Through new emerging communication technologies, women have started to campaign feminism.

In a webinar organised by Gender Impact Studies Centre at Impact and Policy Research Institute, the Delhi Post and Gendev Centre for Research and Innovation, Gurugram, Japleen Pasricha, Founder, Director and Editor in Chief, Feminism in India (FII) highlighted the constructive media in which news is influenced by the reporter’s social location and choices are based on certain editorial decisions. The different mediums use creative language which evoke certain feelings that impacts the way subject is perceived by the public. Thus, being aware of such language can reduce people’s susceptibility to messages and increase their appreciation for the creative process. She also pointed that media stories are value laden and carries the message regardless of their impact on public opinion.

Japleen opined that media is created for profits and hence it is important to make sponsors, channels and advertisers accountable for misinformation. It is being observed that certain media houses deliberately spread fake news for Television Rating Points (TRPs) and they align it with certain political agendas hurting the sentiments of people. Thus, as media consumers it is people’s responsibility to cross check and fact check of every news item.

Alternative media is a anything which is independent, distant, radical, underground, subversive, non-cooperate,progressive,small and falls outside the perspective of main stream media.

It differs from established or dominant forms of media. Japleen said, “this form of media is booming simultaneously with digital media. It uses a wide spectrum of communication, technologies and formats like Facebook, YouTube or Instagram or media platforms based on newsletters”.

Further, Japleen shared that the issues of lack of Indian women and minorities’ representation on the internet, increasing online abuse and gender base violence, online harassment faced by women and minorities often, spreading patriarchal ideas through fake news and misinformation. This stems the need of feminist media.  She said that the discourse around the scale of gender base violence has been gaining momentum all over the world especially in India, however the problems persists on how the reportage heinousness of crimes such as rapes, sexual harassment, sexual violence is being carried out in media alongwith the kind of language used.

Japleen highlighted spooky headlines, which are made to invoke horror and shock among people that are generally insensitive and problematic. The featured images are often insensitive depicting victim’s helplessness and misery throughout her life. The language used, highly blames victims by putting them in bad light ignoring the perpetrator completely. This whole wrong use of speeches influences the thinking of public. Thus, it is important to shift the media focus from victim to perpetuators.

Women issues have not been covered properly, bringing women at a greater risk of being marginalised with in societies given the global health crisis.

Citing an example to elucidate her point, Japleen said the accessibility to menstrual products and crisis of disposable pads were completely ignored from media coverage. She further added that media has been ignorant of sexual health for women especially regarding abortion which is a stigma and a challenge to a safe and confidential abortion services even in regular non-pandemic circumstances. With the current public health emergency situation where facilities have been repurposed for COVID-19 management, there has been a shortage of abortion services. This shows how COVID has ignored women’s health. Japleen further empahsised the need for telemedicine to support people without exposing staff to viruses/infections in the times of such outbreaks.

The feminist media industry needs to be encouraged to produce gender-transformative content and to develop self-regulatory equality policies, including access to decision-making positions thereby creating gender equality in content, workplace and management.

Boosting ‘nitrogen use efficiency’ in rice