Murky and Gendered Singlehood: Tales of Single Women in India

Many women are walking the tightrope of working at home and also working from home due to the impact of the pandemic. The virus outbreak also has highlighted women’s economic insecurity.

“As a single parent, I juggle parenting and being a single bread winner on a daily basis. It is a tough balance to maintain, and in the lockdown, it has only become worse. First, financial stability is shaken. 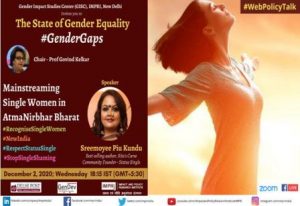 I am a solopreneur and work as an independent consultant. So there is no pay cheque coming in at the end of the month. If I don’t work, I don’t get paid. I chose this path because it gives me more time to spend with my baby boy,” pensively pauses, 38-year-old, Supriya Jain, in Bengaluru, whose husband passed away in 2015.

Using his frozen sperms, Supriya conceived their son in August 2018. He is one-and-a-half year toddler now. “With clients cutting down on their spending, I’ve seen my retainers being put on pause and some projects outright cancelled. I woke up to two thousand rupees in my account at the beginning of this month! Some savings I had in mutual funds were also wiped out because of the market crash, almost at the same time. The prospect of not being able to generate an income or using up all my savings scares me. Having never depended on anyone for my financial needs, I don’t want to take that obligation,” she slowly resumes, “Even though I live alone, I had a large group of friends and family that I socialized with. Every day, someone or the other would drop in to just check on me. All that has stopped now. We still connect on calls, but it’s not the same.”

“The evening that the lockdown was announced, I packed and moved in with my folks, temporarily. The next morning, I had to rush over to pick up essentials, as my elderly parents had not dared to compete with the crowds at the stores to stock up. My first encounter that morning proved to me that as a country we need awareness and acceptance of single women! I was stopped by a whole bunch of cops and was given a very nasty talk by a lady police! Her argument was that I should be at home and send the men out to do the shopping. Trying to explain to her that I’m a single woman taking care of elderly parents and children was not met with any regard, leave alone empathy. So I just rolled up the windows and drove on as they continued to yell at me asking me not to roam around and go back home! Such is the common reaction of this society at large towards single women,” recounts 39-year-old, single mother, Susan Timothy, counsellor and also co-founder/Pastor at Life In Grace Ministries.

Such stories aren’t new in the community, Status Single, India’s first and only community, for urban single women, that I founded in 2018, on the heels of my award-winning, work of non-fiction, by the same name.

It comprised interviews with over 3500, urban, single women and which endeavoured to highlight the diversity of the community and mainstream singlism – now a word in the Cambridge dictionary – the social and moral and familial discrimination and housing and age-related, workplace discrimination, sexual harassment and glaring gaps in the police and legal system that made systematic justice a cold, lonely hell for over 74 million Indian single women (2.5 crore in urban areas, 1.3 are widows and 1.2 crore are unmarried) – the highest ever in our history.

“The COVID-19 pandemic has managed to turn my well-ordered life upside down. My domestic support staff having been debarred overnight, I am now cooking, cleaning and doing 12 hours of office work (from home),” admits 53-year-old, childless widow Sreela Dasgupta, who heads the Disability and Neurodiversity Unit at one of the TATA group companies (TCS). “I live on my own in a rented three-bedroom apartment near the office. I have good days and bad days – the former requires support of crutches, and the latter, a wheelchair. Two, part-time domestic goddesses keep my house spotless and me, well fed. I own a modest car and have a driver who is my Man Friday – he does my shopping, my bank work and pushes my wheelchair to malls, the movies, the parlour, art exhibitions, seminars, the airport – for I travel at least twice a month – nationally or internationally. I am 53. I have a fairly healthy sex life, too — I had decided long ago that I would not get into another relationship – and no man has yet been able to challenge that decision,” says Sreela. She added, “82 per cent people acquire disability. I am one of them. I have a partial mobility disability since 2010 as a by product of an auto immune disease, Lupus, I was diagnosed with in 2005. I was once married to the love of my life who turned alcoholic about five years into the marriage. I was never physically abused, but he was a depressed alcoholic with a mild persecution complex and till we parted ways in 2003, I did not realise that I was holding my breath beneath the water surface of emotional abuse for years on end. I embraced my freedom and single life with open arms. I had thankfully never given up working – so I changed jobs and moved back from Jaipur to Delhi. Life had more in store for me – my years of being in a traumatic marriage triggered off my auto immune disease which sent me to hospital for 6 months. There were days when I wasn’t sure if I would make it. The same year, my husband died in a tragic accident just as I was initiating divorce proceedings. It was not the closure to my relationship I would have chosen.”

While speaking to me, Sreela mentions in passing, how these days she informs her watchman before entering the bathroom.

Due to the COVID-19 lockdown, many women are walking the tightrope of working at home and also working from home. The virus outbreak also has highlighted women’s economic insecurity. A survey by the Kaiser Family Foundation claims a much larger proportion of women worry about loss of income due to disruption of work caused by COVID-19 as compared to men. Under “normal” circumstances, women already face a significant wage gap and alarming rates of attrition. A 2016 Columbia University study reveals that women who have lower income than male counterparts (when matched across age, education, industry, marital status and other factors) are twice more likely to be depressed and six times more likely to suffer from anxiety.

The psychological impact of the coronavirus outbreak is worse for women than men as per the research by Esprimi and Richmond Foundation, a mental health organisation.

The study carried out among 1064 individuals claimed that 47 per cent of the respondents were battling depression and 48 per cent of them often experienced a sense of apathy. The study suggested that women were more likely to nurse such feelings, with a fourth of the female respondents saying they felt depressed all the time.

The jostle for space, whether with kids, or, parents, or married siblings, the craving for companionship and sexual intimacy, the thankless burden of caregiving and the race to earn a livelihood and stay relevant – makes the periscope of single living in urban India, a multi-layered, complex, and, often, one that is spent under the shadow of silence.

The 34-year-old, radio presenter, gender activist, theatre performer and advertising honcho, based in the National Capital Region (NCR), Saumya Baijal who’s been battling depression for the last several months, and stays with her ageing parents, says, “I’ve had the tendency to be reflective for as far as I can remember. Many have accused me of being a masochist almost- who also abuses the luxury of having a heart broken almost in a pattern- albeit not frequently repeated. I’ve tended to isolate myself often, with pretence as my strongest alibi, where if you didn’t know what was happening, and I didn’t give you access or permission to know, you wouldn’t find out what it was. Grief is private, but often it reaches levels where sharing it is the only alternative. And yet, one stalls oneself from sharing exactly what we feel,” she takes a moment, before continuing, slowly, “I used to love films, music, writing, poetry, reading, talking, going out, eating—I do neither now—maybe just read and write since these aren’t boisterous, visible, articulate activities. But even doing them, sometimes re-reading a book, feels like a friendly wave that one has missed.”

On a particular evening, the same week as I interview her, Saumya confesses to having wept for several hours. “The roles change, you know. As parents, they are vulnerable, too. They want me to be well, and, there’s this expectation of always operating within a set routine. And while my folks have been empathetic and me open with them, they cannot understand what I am undergoing. It’s also about this idea of space. That’s where conflict actually starts – now that we are in each other’s faces, twenty-four by seven. Sometimes, I scream at my mother, and she breaks down. Depression carries with it a lot of societal shame and stigma, too. Most often it is ascribed to a woman’s unmarried status – barrenness… my mother’s reaction is somewhere her probable feeling like failure to be a good mother which patriarchy has sanctioned by saving your child, instead of preparing them for life and its myriad vicissitudes….”

(Event excerpts of the webinar organised by the Gender Impact Studies Center, Impact and Policy Research Institute (IMPRI), the Delhi Post and Gendev Centre for Research and Innovation, Gurugram on Mainstreaming Single Women in AtmaNirbhar Bharat.

The writer is Best-selling author of “Sita’s Curse”, and founder of Status Single community.