Gender Gaps and Gender Equality: Why it Matters?

What society needs today is a resocialisation to the changing context. There needs to be an understanding with empathy of the gender roles division and sharing perceptions and attitudes.

Women and girls represent half of the world’s population and, therefore, also half of its potential. However, gender inequality persists everywhere and stagnates social progress. 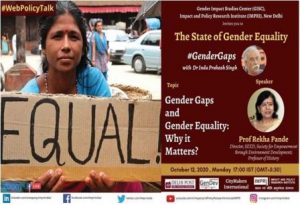 Inequalities faced by girls can begin right at birth and follow them all their lives. As girls move into adolescence, gender disparities widen. Marrying young also affects girls’ education. Disadvantages in education translate into lack of access to skills and limited opportunities in the labour market. Women’s and girls’ empowerment is essential to expand economic growth and promote social development. Advancing gender equality is critical to all areas of a healthy society, from reducing poverty to promoting the health, education, protection and the well-being of society.

Equality is a human rightand it ensures that every individual has an equal opportunity to make the most of their lives and talents, which will lead to social and economic progress. It is believed that no one deserves discriminatory lifeon the basis of beliefs, gender, birth place and disability. Gender equality historically recognises certain groups of people with protected characteristics such as race, disability, sex and sexual orientation have experienced discrimination. Gender sensitisation can be viewed as an instrument for social change and to concretise men and women towards a better understanding of the multidimensional roles played by women.  It is viewed as a critical instrument to improve our knowledge about society, which at present remains partial, biased, projecting only a view of social reality derived from a male perspective. Understanding the causes of gender disparitieswill help us in highlighting women’s contribution to social process and facilitates social action. An uunderstanding of roots of inequality that lead to invisibility, marginalisation, and exclusion of women will go a long way in the creation of a genderjust society.

According to Gender Gap Report 2020, India ranks 112th on the overall Global Gender Gap Index among the 153 countries studied. The economic gender gap runs particularly deep in India. Since 2006, the gap has gotten significantly wider. Only one-quarter of women, compared with 82 per cent of men, engage actively in the labour market (i.e., working or looking for work)—one of the lowest participation rates in the world (145th).Furthermore, female’s estimated earned income is a mere one-fifth of male income, which is also among the world’s lowest (144th).

The declining sex ratio, the preference for a male child in our society, violence against women, sexual harassment at the workplace, trafficking off women, women in polity, health, education and economy are issues of concern that need to be discussed.

In the Asian context, masculinity is defined at the women’s expense. A man’s honour rests in women, thus they are worst hit in caste wars and communal clashes.

Sometimes sexual violence is also due to inebriation. In many societies, women do not possess any property right. The whole socialisation process of how a girl child is reared teaches inequality. Both upper caste dominance and capitalism is aggravating violence against woman. Women have a genetic biological advantage, which resist them to infection and malnutrition.In developed countries women have an average of seven more years of life expectancy. In South Asia it is only one year more than men, which is lowest in any region of the world.

Women’s empowerment is limited by gender violence and inequality. Violence models a way to solve problems, teaches inequality between men and women, and perpetuates costly gender discrimination.It exacerbates poverty, impedes equitable distribution of resources and control over them. Food production processing, nutrition, health, child development, protection of environment, income generation and the growth of economy all suffer when support to women is not in line with their key roles and specialised knowledge in these areas. Violence against women results in high direct costs for both health and legal system since it also affectshealth, nutrition, education, psychological wellbeing and enjoyment of rights of their children. It limits women decision making about reproduction, health out comes with many negative effects. The development assistance often features strengthening democratic process and institutions as goal, but supporting hierarchal and exploitative processes notaddressing gender violence undermines democratic participation and outcome.

Men have been both supportive and antagonistic to the feminist movement. However, feminists too have at times taken a hardline, separatist stance, seeing the challenge of achieving gender equality as resting exclusively with women, ignoring the issue of men and their socialisation within the patriarchal system. However, one must realise that solidarity and an understanding of intersectionality are essential to achieving our shared objectives.Men must begin by acknowledging the privileges they have been born into as a result of the patriarchy. Men often play a crucial role as “gatekeepers” of the current gender order through their responsibilities as decision-makers and leaders within their families and communities. It is necessary for men to stand with women and girls in their daily struggles for the eradication of patriarchal, sexist, and misogynist constructs, so they may have access to equal freedom, equal respect and equal power.

Intersectionality has become fundamental within the social justice movement to work towards a shared vision of progress.

The COVID-19 pandemic has increased the domestic workload of women, increased their care work and also created a “Shadow Pandemic” across the world where many countries reported cases of increased domestic violence and intimate partner violence. The lockdown provides the perfect opportunity to the abuser to practice dictate and control all actions and movements of women. The increased violence is not just a result of the frustration due to physical confinement but also a global slowdown, massive economic dislocation, closed businesses, the specter of looming unemployment, often accompanied by the threat of hunger and poverty for what seems to be an indefinite future.While both men and women are affected by the economic downturn, there is evidence from the past that violence against women increases during episodes of high unemployment.

What society needs today is a resocialisation to the changing context. There needs to be an understanding with empathy of the gender roles division and sharing perceptions and attitudes. The definition of expected behaviour from male and female needs to be changed. All institutions – family, society, educational institutions, state, market, media, religion, caste, culture, literature and other socialisation institutions—should work together to bring change in the social constructions of masculinity and male identity. Gender equality can become a reality if we change the values of our society and we need to begin with the individual. Each individual must make a pledge about his or her own immediate action in private as well as public life if age old practices and values are to be changed. We need to learn to measure one’s masculinity in terms of equality. One can start at home by teaching one’s son to fight against inequality and to teach the daughter to break the silence.

(Note: This is based on the presentation made at the webinar on Gender Gaps and Gender Equality: Why it Matters? organised by the Gender Impact Studies Center (GISC), Impact and Policy Research Institute, New Delhi along with the Delhi Post  and Gendev Centre for Research and Innovation, Gurugram).

The author is Director, Society for Empowerment through Environment Development (SEED), and Professor of History, Former Head, Centre for Women’s Studies, Former Head Department of History, University of Hyderabad.