Guided by Some Divine Force All My Life: Pt Shiv Kumar Sharma

The Santoor maestro reminisced how the legendary singer Kishore Kumar, aware of Pandit ji’s classical music background, had initially refused to sing for the film Silsila---whose music he was composing---saying that he wasn’t a trained classical singer.

“Some divine force has guided me all through my life and my whole focus was on Santoor. Concerts or no concerts, music is here in the heart and mind and goes on all the 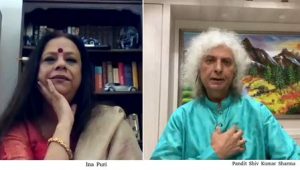 time,” said India’s octogenarian Santoor legend Pt.Shiv Kumar Sharma. He was speaking at a scintillating online session of Ek Mulakat Visesh presented by Shree Cement and organised by Prabha Khaitan Foundation of Kolkata. He was in conversation with author, biographer and art curator, Ina Puri, while connected to hundreds of music lovers and fans from the big and small towns of India.

Pt Shiv Kumar Sharma single-handedly catapulted Santoor—an unknown 100-stringed (shatatantri veena) musical instrument—to the hallowed portals of classical Indian musical instruments and music. “My father (Uma Dutt Sharma) was a great knowledgeable musician from the Banaras Gharana. It was his idea to bring Santoor into classical music. He had a vision to do so at a time when it was unthinkable as classical instruments like sarod, veena, sitar and others held sway. He did the initial research work and it was a long struggle but was destined to happen,” said Pt Sharma, who started his life’s early musical journey as a vocalist and tabla player.

Pt Sharma gave Santoor an identity and contributed to its global popularity. He was also the first to introduce santoor to the Indian films. “I was at a concert in Mumbai in 1955 and film director V Shantaram’s daughter Madhura ji came up to me and introduced me to her father. Later, I played Santoorfor the first time in my life for his film Jhanak Janaki Payal Baje and Santoor came into Indian films,” said Pt Sharma who has composed many musical hits for films like Silsila, Lamhe, Chandni, Faasle and others as Shiv-Hari duo in collaboration with ace flautist Hari Prasad Chaurasia.

Pandit ji holds an open-minded approach towards music, but never compromises on the purity of music. He had forged deep lifelong relationships with other artists like Late Pandit Jasraj and Hari Prasad Chaurasia and enriched the traditional Indian music through collaborations.

The maestro reminisced how the legendary singer Kishore Kumar, aware of Pandit ji’s classical music background, had initially refused to sing for the film Silsila—whose music he was composing—saying that he wasn’t a trained classical singer.“We taped the songs and sent it to him and after hearing it he readily agreed,” Pt Sharma said.

Responding to a question about how the audience has changed over the years, Pt Sharma said, “Audience and reaction of people changes according to the changes in the society. Till the 50s we used to play for long duration as people had more time and the tickets were not so expensive. Over time, the changing of the workplace and other things put together, we had to change our presentation accordingly. I remember I used to travel in America and play for four hours with half-an-hour break. And now, even in India, the concert’s duration is one or one-and-half hours due to many factors. I would not say the quality has changed but the quantity has changed.”

Pandit ji while accepting virtual concerts as the need of the hour felt that it could never create the kind of feeling which concerts have.

Replying to a question—How important is it to have a Bollywood connection for success?—Pt Sharma said that he doesn’t think it is important to have a film industry connection to be successful as there are many musicians who have never been connected to the film industry.

The maestro, who is into meditation, recounted one of his many spiritual experiences in life while playing Santoor. “I played Santoor at the Osho Ashram in Pune for an hour. At the end there was no clapping. All the people sat on with closed eyes. I left without disturbing them,” he said.

Reflecting on the life under COVID-19, Pt Sharma said that it was a great time for looking inward and to realise who you are. Suddenly we are face to face with a reality that brings in a different kind of realisation and we learn many things about life and nature.

The Ek Mulakat series of webinars and events are organised by the Kolkata-based Prabha Khaitan Foundation connecting artistes, achievers, cultural aficionados, thinkers and authors with people across India and other continents.