Demanding that the Union health minister must immediately adopt the complete charter of patients’ rights, without bowing to pressure from the private medical lobby, over five hundred patients, and health activists from six major networks protested at Jantar Mantar. 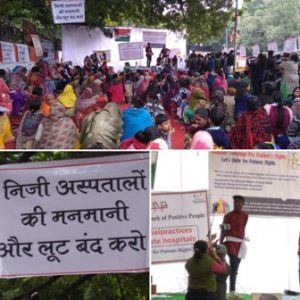 Over five hundred patients, their family members and health activists from six major networks gathered at Jantar Mantar, New Delhi to launch a protest demanding that malpractices, gross overcharging and violation of patients’ rights in private hospitals must be brought to an end.

The protestors demanded an “immediate implementation of National Human Rights Commission’s Charter for Patient Rights” from the Union Health Ministry, regulation of rates in private hospitals to be made affordable and creation of a patient-friendly grievance redressal mechanism to deal with complaints in private hospitals.

“During the demonstration, victims of medical malpractices from various states narrated their harrowing experiences in private hospitals, which are now being documented systematically and compiled, to be published as a book.”

Jayant Singh, father of Adya who lost her life in the now well known case of negligence and gross over-charging by Fortis hospital, Gurgaon spoke on behalf of All India Patients Rights Group. He emphasised the need for a patient-friendly, accessible grievance redressal to ensure justice for patients who have serious complaints related to private hospitals.

Shishir Chand from People for Better Treatment shared his own story and demanded that Medical Council of India should be radically restructured to include at least 50 per cent non-doctor civil society representatives, so that justice is ensured in negligence cases. He also demanded that separate benches should be formed to deal with medical negligence cases, to fast track such cases, and ensure time bound disposal.

“Dr. Abhijit More from Jan Swasthya Abhiyan, Maharashtra stated that the Union Health Ministry must notify the Standards for all levels of hospitals, which have been languishing on their Health Ministry’s website since over five years.”

Meanwhile, students from Delhi University performed a play to highlight the widespread medical corruption, linked with lack of accountability of the private health sector.

While taking forward the agitation demanding that the Union health minister must immediately adopt the complete charter of patients’ rights, which has been pending since six months on the Ministry’s website, without bowing to pressure from the private medical lobby, the organisers went to meet the Union Health Ministry officials later in the day.

Emphasising the widespread violations of rights imposed on people living with HIV when they seek care in private hospitals, Hari Shankar from Delhi Network for Positive people (DNP+) said that rights to non-discrimination, confidentiality and dignity for all patients must be upheld.

Advocate Ashok Agarwal also expressed support for the emerging campaign on behalf of National Campaign for Right to Public Health.